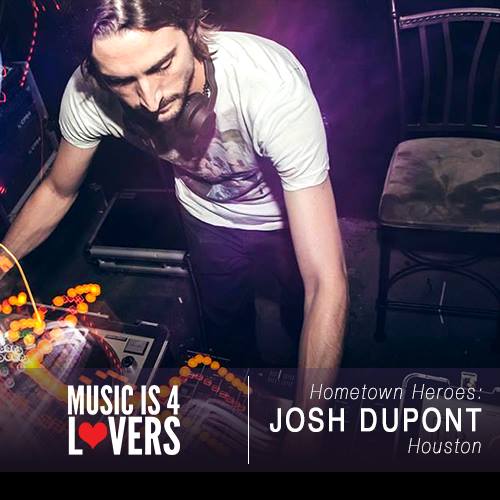 We continue our Hometown Heroes series with a spotlight on Houston, Texas which is not exactly a city that comes to mind when thinking of a destination for an underground scene, but that grasp on the unknown may just be what makes it so special… Josh Dupont seems to keep the beats revolving all around town with his multiple monthly events.  He collaborates with Extended Play partner Spettro to produce “Filter Factory” every 2nd Saturday at The Flat, “La Pista” every first Saturday at Jet Lounge and “Incognito After-Hours” every last Friday at VIA  in addition to “Kinda Super Disco,”with James Reed, that has been drawing quite the crowd with its international headliners to Boondocks at the end of each month.

Aside from keeping the scene alive through his events, Dupont started Nightshade Music as a Houston based house imprint, putting his 15+ years as both a DJ and producer to work to help build a strong sound for himself and his community.  Early this month, he is set to play fringe events at both Denver Music Conference and Austin’s SXSW, and we were fortunate enough to snag this live, bright mix before his travels along with some words on his hometown and its potential for musical growth and prosperity…

1. It seems that when most music heads think about the best spot in Texas to visit, Austin’s ‘weirdness’ has the obvious draw.  How would you describe the alternative scene in Houston and what do you find so special about it?

Houston is the 4th largest city in the US and is a very international city being the home base of many Oil & Gas/Energy companies. I love  this about Houston, we always have a steady rotation of Europeans and Central/South Americans that come here to work usually on 1-3 year contracts. This helps keep our underground scene fresh with new faces and energies of people who grow up and have a deep understanding of underground house and techno because it’s the norm there, it’s even popular and trendy! Almost the exact opposite here in the states, we are the minority and especially living here in Texas we have always been the underdog. And honestly, I think that’s the way we prefer it 🙂 There is so much potential and talent here in Houston, we are about to blow up!

2. You seem to coordinate a lot of awesome nightlies in town, do you feel like you are contributing in building a strong, musical community?

Yes of course that is part of the whole point, we are all trying to put Houston and Texas on the map! Right now, all the promoters and DJs have been working together (for the last few years) realizing it will take us all working together with strong communication to achieve this movement.

3.  If you were to chose a ‘sister city’ for Houston, which would it be and why?

I would say Denver. They have a consistent big scene and a very mature, loyal local scene just like we do.

4.  If someone only had one weekend to spend in Houston, what are some of your favorite spots you would advise them to hit up?

When I was a kid I wanted to be a (ninja) Astronaut, I even went to Space Camp so visiting NASA is at the top of my list. Also, one of my personal favorite places is the Menil Museum and Rothko Chapel with the surrounding park in the heart of one of the most diverse neighborhoods – Montrose. Now food wise it’s too hard to name a few, Houston has some of the best top notch restaurants in the world.

5. What are your favorite venues to play at and why?  And where do you hope to play/visit in the future?

Kingdom in Austin, TX and BETA in Denver, CO are two of my regular favorites, ALWAYS a great time! Playing last year on the Disorient Stage at Burning Man was very special too. I want to play at Mamitas at BPM and Studio 80 and Trouw during ADE this year… they have both been on my list for a few years now to play at.

4. Who are some artists you envision making a big impact this year?

This year I was very impressed at BPM with the local support and talent of the Mexican DJs. There is a very cool fresh new sound coming out of Mexico from Climbers, Balcazar & Sordo and Gog (owner of Louder Music), Tenampa Recordings and many more.

6. Pick your poison, drink of choice?

Besides espresso, it’s always Jameson neat with a beer. Keeping it simple and classy haha