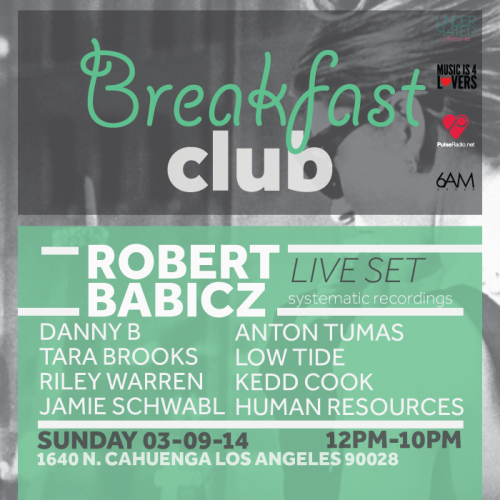 A producer who needs no introduction, Robert Babicz has been blessing our ears with amazing music for many years.  The good people at Couture know that LA is in need of some high quality music and they are set to make this Sunday one you will never forget.  With an incredible sound system and a proper vibe, Breakfast Club is going to be a proper soiree that will keep patrons moving and grooving all day long. With a stellar headliner and support from LA’s best, we at Musicis4Lovers can’t wait for this party and we are lucky enough to give away a few tickets to this awesome show.  But before that, let’s learn a little bit more about the man of the hour Robert Babicz.

Since his fourth full length dropped on Systematic Recordings and the launch of his own label Babiczstyle in 2010, Robert Babicz has continued to reveal his talent and skill as one of Europe’s most essential techno producers.
Robert’s musical output is inspiring and staggering. A true one-man operation, he writes, records and performs solo; commanding an ever-expanding touring schedule, tailoring the music he creates to the cities he visits. But that’s only part of the puzzle, Babicz’s art is comprised of more than just his music. He films everything. Using his music to open doors and build relationships with people in only the way music can, he then records his experiences and interaction on film, both still and moving, later editing the images together as a picture track to his audio. Robert creates short films that capture the emotions, colours and feel of his trips, his music and the people he finds who want to be part of that experience. In turn these then also have an effect on his music colouring his emotive, unique take on electronica with a very human feel.

Winners will be announced on Saturday March 8th and your name will be put on the list +1.
REMEMBER – The more you share this post, the more likely you are to win, so share away and follow us to stay up to date!