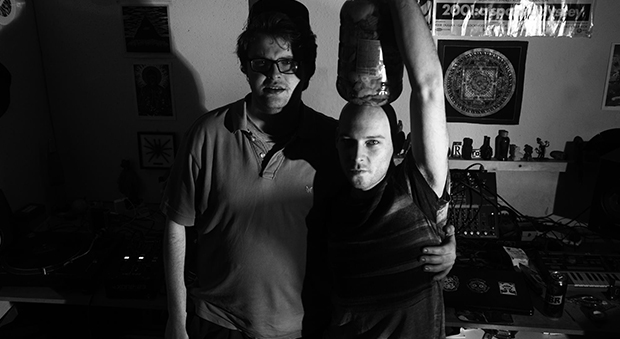 In October of 2014 an assorted collective of DJs, artists, and MCs was born in London; their name: Loose Lips; their mission: diversity.

The group includes resident DJs DanBe, Juggins, Medallion Man, Rommek, Silvestre, and T-Scale; and also contains three resident MCs: SWMS, Sofacik, and Treece. The Loose Lips crew is hellbent on meshing an array of genres through the events they produce; a weekly radio show on Hoxton FM; and by way of their artwork, podcasts, and compilation albums–the latest of which is set to be released Feb 1 via Loose Lips’ SoundCloud page.

Any dance party enthusiast can find Loose Lips all over the UK; they’re upcoming schedule includes showcases in Brighton, Bristol, Manchester, Torquay, Birmingham, and of course London–their home base.

Today we’re featuring two mixes from residents of the crew: Medallion Man and T-Scale. Get to know more about Loose Lips by checking out these two raw sets and reading the interview below.

How did you guys get into dance music and DJing? Do you remember a specific moment of inspiration or was it an evolution?
T-Scale: Got massively inspired by listening to the Blech 2 mix by P.C. & Strickly Kev, over and over with my mates. I think that’s the perfect example of an eclectic mix that keeps continuity throughout. Watching numerous DJs play, getting inspired by their technique, encouraged me to learn.

Medallion Man: I first started via radio, hosting a show on a number of Internet radio stations. This acted as the catalyst for a growth in my knowledge of music and I then started to play out out around London. There are numerous moments of inspiration – for example, hearing Kenny Larkin’s ‘Q’ track and quickly becoming obsessed with techno. However, it was undoubtedly an evolution, learning the differences between mixing in a club and on the radio in how to engage a crowd.

Loose Lips—How’d that happen?
The name can mean a number of different things…we leave it up to your imagination!

Like a lot of start-up promoters, we were fed up with the bookings we were getting and the predictable nature of a lot of London’s events. It felt like our passion needed to be pursued by us, as opposed to trying to match someone else’s image. We wanted to start an event that reflected our broad tastes, bringing different crowds together, whilst maintaining a focus on quality.

From the start, this caused problems in trying to create an identity that wasn’t focused on one genre. However, in maintaining a focus on diversity, we have thrown a wide range of engaging parties over the last year which draw influence from a number of different scenes. Since our first party in October 2014, we haven’t looked back, encapsulated by the project day in and day out!

Describe the scene in London in 5 words or less…
Saturated, disconnected…YET….dynamic & creative.

Are there plans for Loose Lips to expand outside of Europe?
Yes, for sure. There is so much exciting stuff going on globally and so it would be closed minded to focus only on Europe. We have made some great bonds around the world. In the US for example, LA-based label Plastic Love came onto our radio show recently and we also had a wicked track from San Francisco-based ‘Worker Parasite’ on our fourth compilation album. The same goes for Asia. We look forward to travelling to these places in the coming years.

Eventually though, we plan to take over the world…it may take a while! If not us, our kids will!!!

Besides your compilation albums on Soundcloud are there any goals on building the Loose Lips brand into a full-blown label?
Definitely! It’s almost a natural progression for a collective like ourselves. For the time being though, we are enjoying working on eclectic compilations every 2 months.

What the motivation behind infusing hip-hop with house music?
In London at the moment, the scenes can often seem a bit segregated. We have very varied tastes though and so when we chose to start a night, we felt obliged to corroborate these. Whether Jungle, Deep House or Ambient, these are all elements of our tastes/culture and so deserve showcasing. Our hope in doing this is to bring crowds together, introducing them to new styles of music and discovering connections between them. For example, both our mixes for you are reasonably dancefloor-focused but hint towards lots of other influences.

Crucially though, this doesn’t mean that our nights have no fixed appeal and that our mixes are confusing! We focus thoroughly on different sounds on different occasions, hoping that some of the crowd from our Hip Hop events, for example, come along to our next House/Techno night!

Put it this way…if Loose Lips only showcased house music, and you then showed us a Wiley beat, we’d start kicking ourselves, unable to play it out!

Name a couple core values you hold as a DJ?
T-Scale: 1) The music comes first, not you.
2) Never take anything for granted. Keep your head cold.

Medallion Man: 1) Whatever scenario you’re placed in, there is always a way to match your tastes to the demands of the crowd..
2) Always take a moment to appreciate how you’ve progressed, comparing your current situation with your former self.

Which way do you lean towards — 115 or 125? What’s one of your favorite jams you’re playing out at the moment?
To be honest, that range is a little small! If it excites us, we’ll play everything from 80-180bpm.

For both of us, one of our favorite current jams is ‘Fallen’ by Shinra. It’s off his ‘Ball & Chain’ EP, which is the debut release on ‘Null+Void’. With Drexciyan-like synth-riffs and a ravey feel throughout, it will feature in our sets for a long time to come.

What gig do you dream about?
T-Scale: One with a live performance by Drexciya, with James Stinson… I can only dream of it unfortunately.

Medallion Man: Playing in the mountains in Japan alongside Matthew Jonson.

What cool things do you have planned for 2016?
We have some fantastic nights lined up – in April, we’re hosting a dream line-up with Florian Kupfer, 65d Mavericks, Manni Dee & Sea of Scald.

We aim to travel as much as possible, continuing to meet lots of wonderful people – a highlight is coming in February when we’ve been invited over to Macedonia for a couple of gigs. Can’t wait to smash up Skopje!

And we will continue to expand our mix series/radio shows/artwork series/compilation albums. Over the last year, these have connected us with so many talented people, and the schedules are only going to get more and more exciting.

Tell us about your mix…
T-Scale: It’s a selection of new and older tracks, physically proven on dancefloors.