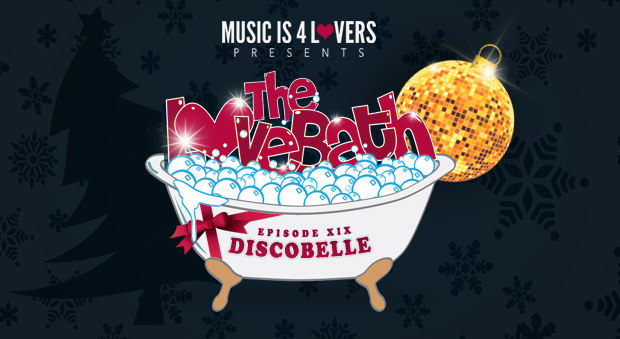 Starting out in 2004 as a website for a local club club night in Sweden, the Discobelle family have now been charming folks with their music for over a decade and have grown into a digital record label with over 30 releases spanning various genres… not to mention they’re one of the most respected music blogs on the web today. We’re quite happy to welcome them for a LoveBath episode that’s sure to melt away the December coldness. Pour in the bubbles and enjoy!

** CLICK HERE if you do not see the SoundCloud player.

Hey guys! Thanks for taking the time to talk to us.
Thank you, it’s our pleasure and also huge thanks for asking us to do a mix for you!

Tell us a little bit about Discobelle. Who is involved? What is your musical backgrounds? What inspired the site? What are your hopes and dreams?
Well, Discobelle is a music blog that’s been around for almost 10 years now. We’re basically the grandparents of music blogs. There’s quite a few people involved at the moment, there’s the founders/writers/label heads Martin Andersson, Niklas Mijdema and Björn Jeffery and then we have a crew of super awesome writers and designers which are Kristi Shinfuku, Lauren Knight and Davey Schacherl + our label graphic designer Julia Szulc.

Martin and Niklas made the mix and we basically started dj’ing when we were at university at various student bars and clubs, Niklas also hosted a radio show at the student radio station and ran another more dancehall/reggae focused blog called Fat Bankroll. We’ve continued dj’ing during all these years that we’ve been running Discobelle and we also do a monthly mix show for Swedish national radio.

What is it like growing the blog into a record label?
It was surprisingly easy and felt like a very natural step to take and of course a great way to get a lot of amazing music out to the public.

What can we expect from the label? Any upcoming releases you can tell us about?
We’re taking it a bit slow and not doing as many releases as before but we will actually be releasing an amazing album in early 2016 from a Swedish artist, it’s still a bit hush hush but he’s released on Discobelle Records before but under a different name.

Who are some distinct artists (or sounds) that are inspiring you?
We’re of course into a lot of house and techno artists such as Adam Port, Johanna Knutsson, La Fleur etc and both the Scandinavian dance music scene and the French/German dance music scene has a sound that appeals to us. US/Berlin duo Benoit & Sergio are a common favorite but other than that our tastes both differ and combine at the same time.

Where are you based? What’s the hometown scene like?
We’re based in Malmö which is the third largest city in Sweden, the scene here is pretty good especially since we’re really close to Copenhagen. There are some really amazing artists from Malmö coming out and there’s a good variety of clubs etc.

Tell us about your mix…
This is basically a little acid, weird sound flavoured mix of some our recent favorite tracks that we did so that everyone can dance to it in order to withstand the December coldness.

Drink of choice…
I’m a whiskey sour kind of guy but this time of year there’s of course what here in Sweden is known as “glögg” (=mulled wine) so i’ll drink some of that along with a tasty beer or two. I believe that Niklas drink of choice would be beer as well 🙂