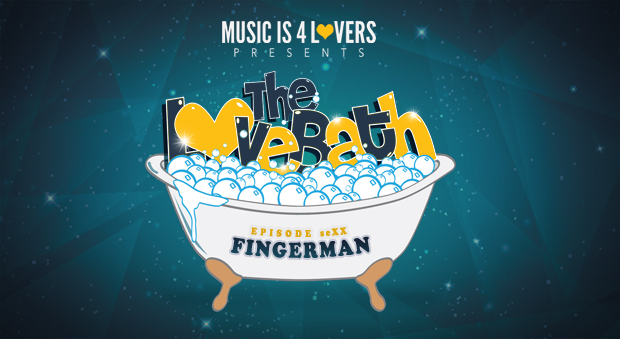 We are delighted to start of an amazing new year of suds and sex with a special two hour immersion in The LoveBath with one of the most respected disco darlings we know. With over forty releases out on an assemblage of top labels including his own Hot Digits Music – Fingerman has been a shining star in the disco scene and he’s been on our radar for a LoveBath mix for a few years. We had a chance to chat with him about his labels and being the great guy he is he agreed to craft us a provocative bath-time experience that we know you’ll want to repeat over and over again… Take a dip!

**CLICK HERE if you don’t see the SoundCloud player.

Hi and thanks for talking with us! Can you tell us a bit about yourself?
I live in Brighton and have been djing since the mid 90’s beginning with house and techno switching genres over the years finally settling with the sounds that started the whole dance music sound… Disco and Funk. Outside the music world I like hanging out with my girlfriend and cat whilst occasionally going to the pub.

You’ve been running Hot Digits Music for a few years and have put out about 20 stellar releases so far — could you tell us about the label and how you manage it?
Its been awesome so far. And the support has been great. I always have a template with the label in terms of what gets released and can be a bit selective but to be honest I think you have to be in order to get your tastes across. Its really fun creating releases with the artists. Each release for me has been an event in itself and all creative credit has to go out to the fantastic artists that have contributed so far.

What about your new baby Wax Digits Music — Was that something you decided to start because of the recent vinyl resurgence? Is there anything on the agenda that you can tell us about?
I think it has been about the vinyl resurgence yes. I was a huge vinyl junkie back in the day so its great that things are coming full circle. I think just having a limited run on vinyl puts real value on the tunes themselves also.

What first pushed you towards the disco scene?
The samples from my favourite house records. I was a big fan of the disco house sound of the nineties (I still AM) so finding the samples that made the tracks so good was always a goose bump inducing experience. My djing partner in crime when i first began playing disco vinyl used to spend hours crate digging on weekends.

What was your first mixing set up?
A shitty set of belt drive Numarks. I remember getting my first 1200’s from a good friend of mine for a decent price and the difference was unreal. Nowadays I used Pioneers but its always JUST Pioneers… I don’t use a laptop for djing. I like the “hands on” vibe you get that harks back to my vinyl djing.

What music have you been feeling in recent months? Any new crush you can share with our readers?
James Rod has been a big deal the past year but there’s some great work coming though from Ourra, Goldboy and Arsenii. There’s too much good music about to be honest! I just want to hear it all!

What can we expect from Fingerman in the near future?
I’m gonna get on the production wagon properly this year. I’m a massive technophobe so grasping new systems is a nightmare for me. I just need some time to actually DO this!

Anything else you’d like to talk about?
Just wanna give a shout out to everyone who has supported me and kept the scene going. There’s a big feeling of family in the disco scene and with everyones help it can only get bigger.

Tell us about your LoveBath…
I don’t like suds and often read old Transformers comics in the bath.

🙂 Best answer so far. Drink of choice?
Cider of course.