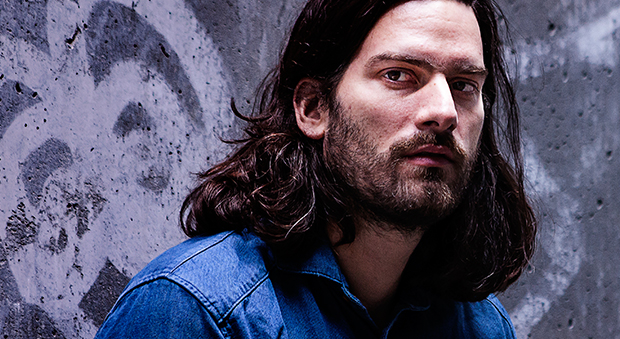 Sup Homeboy! This Croatian Rock ‘n’ Roll musician turned House ‘n’ Techno producer remits the funk at every turn; in his original tracks, in his DJ sets, and in his live improvisations. Influenced by his Rocker roots, Homeboy strives to keep things as real as possible in his hometown of Zagreb, where the deep and dark Techno has taken over, as is the case in most of the world. Disco and Funk are now considered “the underground.” Homeboy primarily plays live sets where he can jam and let loose — another characteristic from his musical upbringing. He also operates a label with a couple of his own homeboys — House Is OK — and has released tracks on other prominent labels, such as Hypercolour and WOLF Music. Homeboy is a fresh and exciting artist. His music is just a bit off-kilter and we love it! Check out his jams in this week’s Lovecast.

Where did Homeboy begin?
It all started in 2006, when I returned to Zagreb from Frankfurt where I was studying Audio Engineering. I was playing in various bands back then, being really into experimental rock music. But when I got back I no longer had a band so I started producing electronic music on my own which I am continuously doing since. Time spent in Frankfurt really inspired me; I was going out a lot, visiting Robert Johnson almost every weekend…I didn’t have the nerve to start a band all over again, so it was the logical artistic step as I was really into House and Techno at the time.

Where are you based now? What’s the scene like there and how does it influence you? Do you have any residencies?
Zagreb’s been a base for a while now. The scene over here is quite small, but vibrant. There are a lot of good parties, a couple of really good DJs…so there is something going on constantly. You could say there is some kind of rave here every weekend, though I couldn’t say the scene is influencing me so much on an artistic level, but has done its share of it on a DJ-promoter side. We don’t have clubs that deal with budgets like in Western Europe; it is all really old school here. If you want to play on a party, you’ll have to do it on your own, as promoters rarely book people outside their crews. That means doing all the production around it and taking the financial risks that go with it. You’re often thrown in the situation that you have to bring all the equipment to the venue with you and you can’t count on selling tickets every time, as there is so much going on every weekend. The competition is really strong, when it comes to promoting parties. It can be really tough, but it influenced me to think about all the elements. I do the House Is Ok parties at Masters, which is a very small, but open minded venue and I have a constant residency at Funk Club which is more of a DJ bar then a club. Both have relatively open politics when it comes to music and they are probably the only venues where you can play a bit more soulful and funkier music. In general, Zagreb is really about the darker side of dance music and industrial influenced techno. So playing soulful and funky house records is really underground here! Occasionally I play at Sirup, which is a more techno and tech house oriented venue I’d say, so I play more acid, harder edged house stuff and techno there.

How does the freedom of playing live differ from a DJ set? How it is more challenging?
I’ve been playing live since I was nine or something. It just changed from playing drums in bands, to playing on a full electronic setup, so I can’t say it is more challenging for me than DJ-ing. I would say it is the other way, as I started with DJ-ing two years ago, so it is a fresh thing for me. But, I am really inspired by it and I love doing it. When it comes to my live shows I always try to find new ways to improvise and allow myself to do mistakes. I include a lot of on-the-fly drum programming, play keys and reconstruct the arrangements of tracks and even give them different flavours. You can change a track a lot already by just programming a Latin flavoured groove instead of the usual 4-4 disco beat. I like to play with these things and take the tracks to different directions. That needs some practise of course and the level of mistakes is much higher, but I like to think that the crowd will have more appreciation for a dynamic live set, then looking at someone who is just starring into a computer screen, tweaking filters, pressing mute and solo and adding effects. For me it is more fun to take a risk, that’s for sure!

You’ve released jams on Hypercolour and WOLF Music; any other labels in the works? What is your dream catalogue to be a part of?
There was a time when I dreamed about releasing on legendary house labels such as Strictly or King Street, but right now I like these things to happen naturally and go with the flow. I was also more focusing on House Is OK in the past two years, so I wasn’t really thinking much about releasing on other labels, but I want to do something for somebody else now, as House Is OK is also meant for other artists, not just myself and my partners and we have some really exciting stuff coming up now.

What exciting news can you tell us about?
I’ll be having a couple of really cool gigs over the summer and I can’t wait for it. It will start with the 2nd anniversary of Hijackin, one of the best House parties in Berlin. They always do incredible line-ups and I guess they are coming up with something really special for this one. Then it’s time for Sonus Festival which is an amazing festival, one of the biggest on the Croatian coast followed by Dimensions Festival which will be a happy return for me. A couple of other things are lining up for autumn, like getting back to Salon Zur Wilden Renate and I’ll hopefully make it to the UK for the first time for a huge Warehouse party. I also have some fresh music coming up on Vakum Records, a label based in Pula/Croatia.

Tell us about your mix…
It is a selection of upcoming HIOK exclusives which I want to keep secret for now, stuff from friends and the international community sent to me, and I threw a couple of things in that are kind of hard to find. You’ll have to go through a lot of early Tony Humphries mixes and embrace French House if you want to find some of the records in there.

Drink of choice…
I’m a beer guy which doesn’t go well with my figure at times. In Summer, I also enjoy drinking “Gemisht”, which is basically white wine with sparkling water.