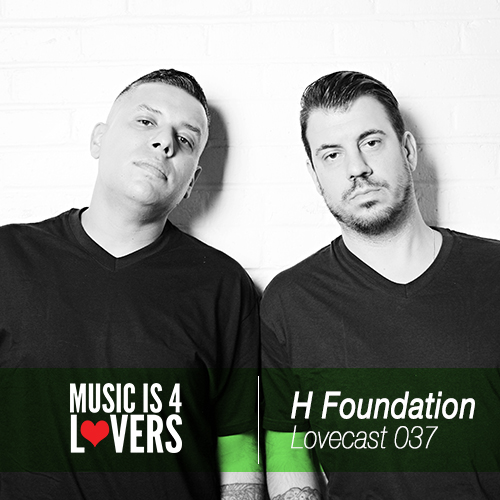 Next up on our sexy-as-fuck Lovecast series are our great friends and heroes, Hipp-e & Halo aka H Foundation. These two guys have accomplished so much in our music scene and have produced a slew of excellent tracks that literally all of the greats over the past decade play. In fact, if you don’t have any H Foundation in your crate, I don’t know what you’re doing with your life, I really don’t. Lucky for us, they are as down to earth as it gets and have given us quite the gift of an exclusive mix in addition to some insight into their lives by way of this interview below. Do yourself a solid: press play on this lovely Lovecast and take a read into the world of the legendary H Foundation.

Where are you from and where do you live now?
Halo: Born and raised in Chicago and been living in San Diego since 2000

Hipp-e: I was Brought up in Colorado, lived in San Diego and now living in Denver

How was the music scene growing up?
Halo: Growing up in Chicago was amazing I was sounded by some of the best music around and that had a lot to do with me starting to dj at such an early age. my parents listened to a lot of early Rock & Disco.

Hipp-e: Well I grew up in a small town in Colorado there was no music “scene”(laughs) I was blessed that my Mother listened to a lot of Soul and RnB, she also at some point got into rock. But I first got into electronic music when a friend had moved from NY and brought a bunch of mix tapes from the radio, kiss fm, and thats when i got turned on to electro and Break dance records. those were the starts to wanting to follow music and becoming an audiophile and over all music lover.

How has it influenced your music and shaped you into the producer/dj you are today?
Halo: I remember going to some of the early clubs like medusas which was a 17 and over club and listening to guys like Armando, Dj Rush, Spencer Kinsey aka Gemini & Lil Louis playing a mix of obscure Disco, House and Industrial New Wave, I think all of those things have been a huge inspiration on my music career because i was exposed to a wide range of electronic music growing up.

Hipp-e:  I started Dj’ing in the 80’s so my real early influences came from alternative music that was the beginning of electronic music, thats what really pushed me to want to continue a career as a DJ. it wouldn’t be til the late 90’s that i would really know how it would influence me when I started producing, I always wanted to incorporate sounds i had in my head from those early days, subconsciously I’m sure I have taken synth lines or baselines from tracks we were inspired by from then.

How is the music scene where you live today?
Halo: The music scene in San Diego is great I’ve seen it grow so much over the yrs we have a really nice intimate underground scene here that is growing every year, I think the past years a lot of djs never looked at San Diego as a place to come and play and always would just play SF, and LA but now guys are now including San Diego on the west coast tours.

Hipp-e: Denver is great, I would say spoiled in fact, there is a solid scene that has been thriving and successful for years. we have a couple great clubs and promoters that are trying to bring fresh talent. I started promoting parties locally 5 years ago, and we were blessed to have some amazing events as well. Denver has alway been a “HAVE TO” state for all artists on tours being a Major market, So we see a lot of great shows coming through across the musical spectrum.

Heard you guys have a residency at London’s prime underground club Fabric. How did that come about?
Hipp-e & Halo: Back in 2001 we were djing at a club in Miami during WMC and a girl approached us by the name of Nikki and asked if we had ever played in London we said no and she said I want you guys to come play at my club in London called Fabric our jaws almost hit the ground. Fabric was amazing we played with Doc Martin that night after playing that night they asked us to be residences and we would play there about 6 to 7xs a year we still play there regularly and the fabric crew is family to us and have been for yrs. During that time they asked if we would mix one of the Fabric cd which was 07 of the series.

When did music production become a serious part of your life?
Halo: I used to work at a record store called Hip House in the early 90’s and a few of the guys there had some studio gear they would invite me over to hang out after watching them work on beats I was immediately hooked and really wanted to make my own music I ended up buying a sampler and locked myself in my room and worked on music everyday.

Hipp-e : I had been Dj’ing for years before I started producing, but thru all those years I had so many friends that were the producers of the music I supported, I guess it was inevitable that I would  produce. Halo had and I had been hanging and he was working on the MPC 2000, He came for a visit and we went and bought the exact set up and that was the start of it all for me in the studio.

When did you know that you were going to continue on doing this professionally?
Halo: I never really new I just loved doing it and had a serious passion for it and just kept on pursuing what I loved,

Hipp-e: I don’t think there was ever anything else in the cards for me, I am only now starting to see that there are other business ventures and investments that I want to make to secure our future, But thats only come around about 9 years ago when I had twins(laughs). I think before that I just loved what I did and always pushed to try for more, And with every little success it made me stay with it. And I have to say I have been blessed with amazing support from my wife and rock of 17 years.

Do you guys prefer to work alone or do you like to do collaborations?
Hipp-e & Halo:  We have always worked on a lot of collar productions, we enjoy usually working with like minded producers that inspire us as well. its good to learn new tricks and techniques and sharing sample files and ideas.

How important is where one lives for a career in music production?
Halo: I think the most important thing is finding the right inspiration after that everything comes natural.

Hipp-e: I don’t know that its that important, although all people are different. I enjoy that I hate cold weather and snow, so in colorado I can get work done in the winters, When I lived in San Diego it was hard to want to stay inside cause it was always so beautiful. But then again those sunny days brought a lot of inspiration too!! i guess that proves further, its doesn’t matter where your body is if your head is in the right place.(laughs)

What advice would you give to aspiring producers?
Halo: Just stay true to yourself and try to add something unique to what ever your producing.

Hipp-e:  Know your roots, respect yourself and all others cause at the end of the day we are all here doing the same thing, and don’t settle, always push for more!!

Can you tell us one record or song that has changed your life?
Halo: I don’t think theres just one record that has changed my life there have been many. A couple of the 1st records that I still own that I will never forget are Lil Louis “Blackout” & Armando”Land Of Confusion.

Hipp-e:  Too many to mention, most of them being non dance music albums. for house music, I was a dj in the clubs in 89 and got turned on to lil louis “French Kiss” which had come out one year earlier that song is still a classic tune that you can play at a party for 200 or 20,000 and goes off.

What are the best things about being on the road? Worst? Best moment on the road?
Hipp-e & Halo: Best parts would be playing for amazing people and clubs all over the world, being blessed to have support for our music and making friends and life long relationships. worst parts are the things that can come along with all of that, partying a bit too hard and too much (laughs), having to say goodbye to all those friends and not see them as much. and then also now as a father being away from my family is not too fun. one of the more memorable experiences was one time when we were playing in Argentina at Pacha with Hernan catteneo before he had really started becoming big, and being asked to come from the dj booth to meet someone, we were led by security back to an area where there were a bunch of security guards and a little sweaty guy comes out and says to us “I love your music, its really speaks to me!!!” we were confused and could tell who the really sweaty and obviously mashed up guy was, until we were then told it was non other than the famed argentine football player Diego Maradona

Is there anything special coming up here in the near future that people should know about?
Hipp-e & Halo: We are excited about all the upcoming releases on surface as well as the new H Foundation material, we are also releasing a “classics” album that is set to be out in may, That will feature all of the H Foundation classic tracks and remixes remastered and edited. that will give all the people that may not have heard of our past releases and history of where we came from. We have had so many requests for that, we felt its a great way to put those tracks out and move forward to all the new material. we also are Touring this year again so expect to see us in your area very soon!!