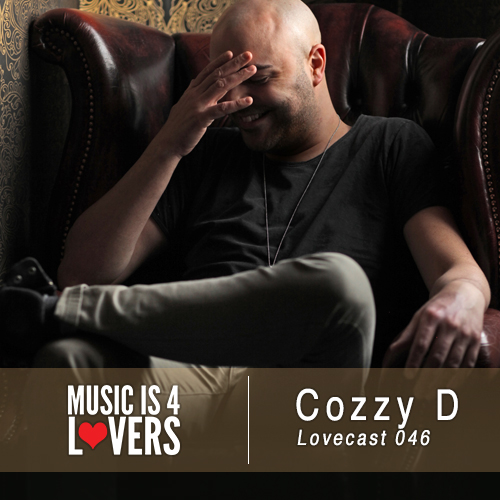 The creative mind plays with the objects it loves. London’s underground electronic scene therefore has been littered with the ideas, designs and impulses of Cozzy D for over a decade now. His tireless work as producer, DJ, promoter and label owner has embedded his influence throughout every annex of the scene, thus yielding a far-reaching impact on dance music culture as a whole. Not only establishing himself as an essential artist through prolific productions and immersive DJ sets, Cozzy has also managed to help inspire a new generation of dance music enthusiasts through his record label and successful parties; revealing him as an instrumental part of London reclaiming its strong identity within the scene once again.

Pushing an eclectic take on house and techno, Cozzy’s music is emblazoned with soul and musicality backed up with potent basslines and expertly crafted beats. Quickly gaining him a reputation as a revered music maker, his versatile productions have seen release on prestigious labels such as Dirtybird, Get Physical, Real Tone, Noir Music, Akbal Music, & Lower East, the imprint he runs alongside Lee Brinx . At the start of 2012, Cozzy cemented his place at the forefront of a movement with the magnificent ‘Mythical Mystery’ EP on Lower East. Featuring the lush, tripped out jam ‘Aphrodite,’ the EP displays Cozzy’s ability to go far beyond the dancefloor and delivers a lasting musical snapshot of his time and place.

As label co-owner, Cozzy presided over Lower East as it became one of the capital’s most celebrated underground labels throughout 2011. The imprint played a huge role in the revival of London-centric house and techno by unleashing a plethora of the city’s most promising emerging talents to the world. Artists like Alexis Raphael, WildKats, Rebel, Michael Jansons & Johnny Mikes joined Lee Brinx, and Cozzy himself on the label to raise the bar for all London based producers. Mixing home-grown talent with the best from abroad, Lower East have broadened their horizons further with the addition of international stars such as MK, Timo Maas, Lee Foss, Kris Wadsworth, James Teej, Droog, Richy Ahmed and Puente & Rosch whose anthemic ‘This Feeling’ became an instant DC-10 hit.

A multi-faceted artist that truly understands underground culture, Cozzy D is not only carving out his own place in musical history, but helping those around him to create their own too. With each of his impressive projects going from strength to strength, his is a name that looks set only to grow in reputation and stature. The only question is just how far he can reach!

Can you tell us a little about where you live now, the scene, and how it shaped you as an artist?

I’m born and bred in London. Growing up in the 90s, I became exposed to the underground dance phenomenon that was UK Garage. I used to listen to Pirate Radio and record shows onto tape so I could listen back on my Walkman on the way to college.

UK Garage was a massive inspiration for me and definitely defined my early DJ career. I’d always liked dance music in all its forms, but by 2000 I started working in an Independent Record Store in North London, where I found myself getting more into House Music; Labels such as Junior Boys Own, Siesta, Tango, Defected, Fluential & Subliminal. From then on House became my main love, and as the music has evolved over the years, so have I as a DJ. The London scene has always been at the forefront of the clubbing world so I’ve been very fortunate over the years to witness some amazing DJs and frequent legendary clubs, many which are sadly no longer with us such as The End, The Cross, Turnmills, The Key.

Over the past few years we’ve seen the use of warehouse spaces become more popular over conventional clubs in London, however in more recent times more clubs are starting to pop up. XOYO and Studio 338 are two great clubs showing some real competition to Fabric.

We are huge fans of your imprint Lower East.  Can you tell us a little about its inception and your goal with the label?

Lee Brinx & myself started Lower East in 2010. We felt that there was a lot of un-earthed talent among our social circle of fellow producers, and wanted to provide a platform where they could receive some much deserved exposure. The likes of Alexis Raphael, WildKats, Michael Jansons, Rebel & Johnny Mikes have all played a part in the growth and progression of the label.

Who are some of your favorite producers of the moment, and who would be your dream artist to have do a remix or and EP for Lower East?

MK was someone who was a massive influence for me growing up, and someone who is synonymous for his amazing remixes. So to have had him already feature on a Lower East release was a huge honor. Claude Von Stroke, Maya Jane Coles, Green Velvet & Catz N Dogz are Artists I have always had huge respect & admiration for, and right now I am really digging Jimmy Edgar’s productions, so an EP or remix from either of those guys would be pretty sweet.

What other labels our there are you a big fan of?

I have always admired the likes of Dirtybird, Innervisions, Mobilee & Hypercolour and particularly respected the way they have each carved out their own musical identity. In recent times I have also been impressed with Hotflush Recordings, Ultramajic, Pets Recordings, and Perfect Driver Music, an L.A based label doing some great bits.

What advice would you give to someone who wants to start their own label?

Really believe in your product and what you want to achieve out of it. Running a record label is so much more than just putting out records. I think it’s important to be unique, and not just a generic clone of something else, especially if you want to stand out and be respected.

Can you tell us a little about your own music production and what you have in store for the 2014?

I started 2014 with a release on Dirtybird called ‘Parts Unknown’ its available exclusively to Dirtybird DripFM members via The Birdhouse. Then at the beginning of April my remix of ‘Artbridge’ by Mantu came out on Get Physical Music, and a week later my single ‘4D’ dropped on Lower East.  I’ve got forthcoming remixes on Decay Records & Lower East plus I’m busy finishing off a couple of new EPs which some of the tracks feature on this Podcast 😉

You have been releasing music for a very long time, do you have any advice for aspiring producers?

Don’t rush to get your music out. I know full well what it’s like to get over excited about your first few productions and to want to get them signed and released, but in reality I think it’s best you take your time and develop a sound you’re really happy with first.

Finally, can you tell us a little about this mix?

The mix is just shy of 2 hours. I always like to make my Podcasts this length.  1 hour isn’t really enough; I know it sounds a bit cliché, but I like to go on a bit of journey with my DJ Sets, covering a wide range of musical styles, mixing old & new tracks, with lots of my own productions. Expect to hear some exclusive forthcoming material from myself, Lee Brinx, Alexis Raphael & much more.