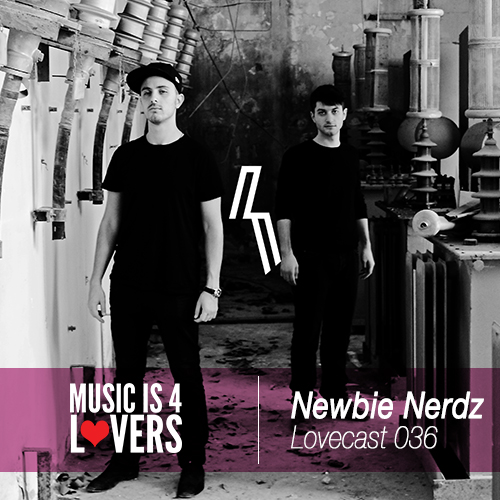 “Newbie Nerdz” met at the corner of London upcoming New Burlington Street in 2010, spooning the sounds of the streets of London and munching into their crunchy slice of pizza, this duo have a unique frame of sounds and sights. Expanding their horizons by travelling to different places and experiencing different cultures and things, they have managed to use them to recreate their thoughts and ideas by paraphrasing their feelings and soul into it.

Nevertheless, also spending numerous years and hours of redefining their styles and researching through technology new and old and methods of incorporating their uniqueness into it. They breed their spirit into the music.

NNz:”Its not just sounds that you make music out of it but you inject life into the sounds that makes the music speaks.”

They start their carreer with their First EP “You Are My Addiction” on Lowpitch Records #49 Deep House Top 100 on December 2011, it has already scored up the likes of Richie Hawtin, Paco Osuna, Cristian Varela, Davide Squillace and Butch and even London very own FUSE 93 resident DJ Enzo Siragusa. These are only few names to mention and a huge support from other RA resident Djs whose votes have been Overwhelming

Where are you from and where do you live now?
A:  I’m from Naples in Southern Italy and I still currently live there.
D: I was born in a small town called Cento and then I moved to a small city near Pesaro where I live now, in Central Italy.
How was the music scene growing up? How has it influenced your music and shaped you into the producer/dj you are today?
A: I was originally influenced as a young boy by my father who bought me my first guitar and my first keyboard at the age of 5. When I first started going out around Naples it was during the techno movement but I really found the music that I loved when I went to London in 2010. It was exactly around the time that the deep house movement started and this is what has shaped
our sound since.
D: I’ve never lived in a big city so I was influenced mainly by countless hours on the Internet and my father who has got a lot of vinyls. Traveling also helped me to discover new sounds and new music. Of course when I moved to London in 2010 and met Alex I began to understand what type of music interested me more. Today, everything influences me. I would say that soundcloud is probably my biggest addiction right now.
How is the music scene where you live today?
Well in Italy the situation in general is not great- we feel like almost all of the movements start in
England and diffuse out to other countries but the arrival to Italy is very slow. It seems that we
are always late and new sounds catch on very slowly. But admittedly things have improved in
recent years and this is encouraging. Hearing our tracks on the Italian radio for the first time this
year has been a major highlight.
When did music production become a serious part of your life? When did you know that you
were going to continue on doing this professionally?
A: It all probably dawned on us last year when we started to release our stuff on some major labels and we received a lot of feedback from people around world. We had around 20 events in 1 year which we didn’t expect! It was a great experience.
D: From the beginning we considered the possibility that music could become our profession- it’s a serious part of our lives and has been from the start.
What advice would you give to aspiring producers?
A: The advice I always give my students and my friends is first- try to be original in what you are doing and second- improve the quality of your sound day by day.
D: Work, study, listen, produce. Seems pretty easy doesn’t it ? 😀
What would you say are your favorite attributes about each other?
A: Dario is smart and serious when it comes to talking about work. And he’s a real friend.
D: We’re pretty similar and we tend to influence each other but the best thing about Alex is that I know I can trust him, he’s like a brother to me.
Can you tell us one record or song that has changed your life ?
A: I love Michael Jackson, i think all his tracks signed my childhood.
D: It’s difficult to choose just one, there are too many. “Stevie Wonder – Master Blaster” is one track that my Dad plays me millions times, can change your humor positively every time you listen it. Check it out!
When you’re not listening to or producing house music, what type of music do you prefer to listen to?
A: I like to listen to everything and I think music is music- it’s impossible for me to listen to one type or one genre.
D: I also listen to all kinds of music, but at the moment minimal music (Glass, Reich, Riley) more so because it’s a genre that have chosen to discuss for my thesis at university.
Do you have anything special upcoming that we should know about?
We’re working on a remix for Lee Kelsall and James Silk on Nurvous Records. We have some really nice originals ready but nothing is confirmed yet. Without a doubt this year is gonna be amazing. Oh and soon there will be a nice “free download” too, so be ready ! 🙂
Can you tell us a little about this mix?
Every time we prepare a podcast we try to tell a story and this time we were thinking about love- the love for the music that you guys bring to people around the world with your community.