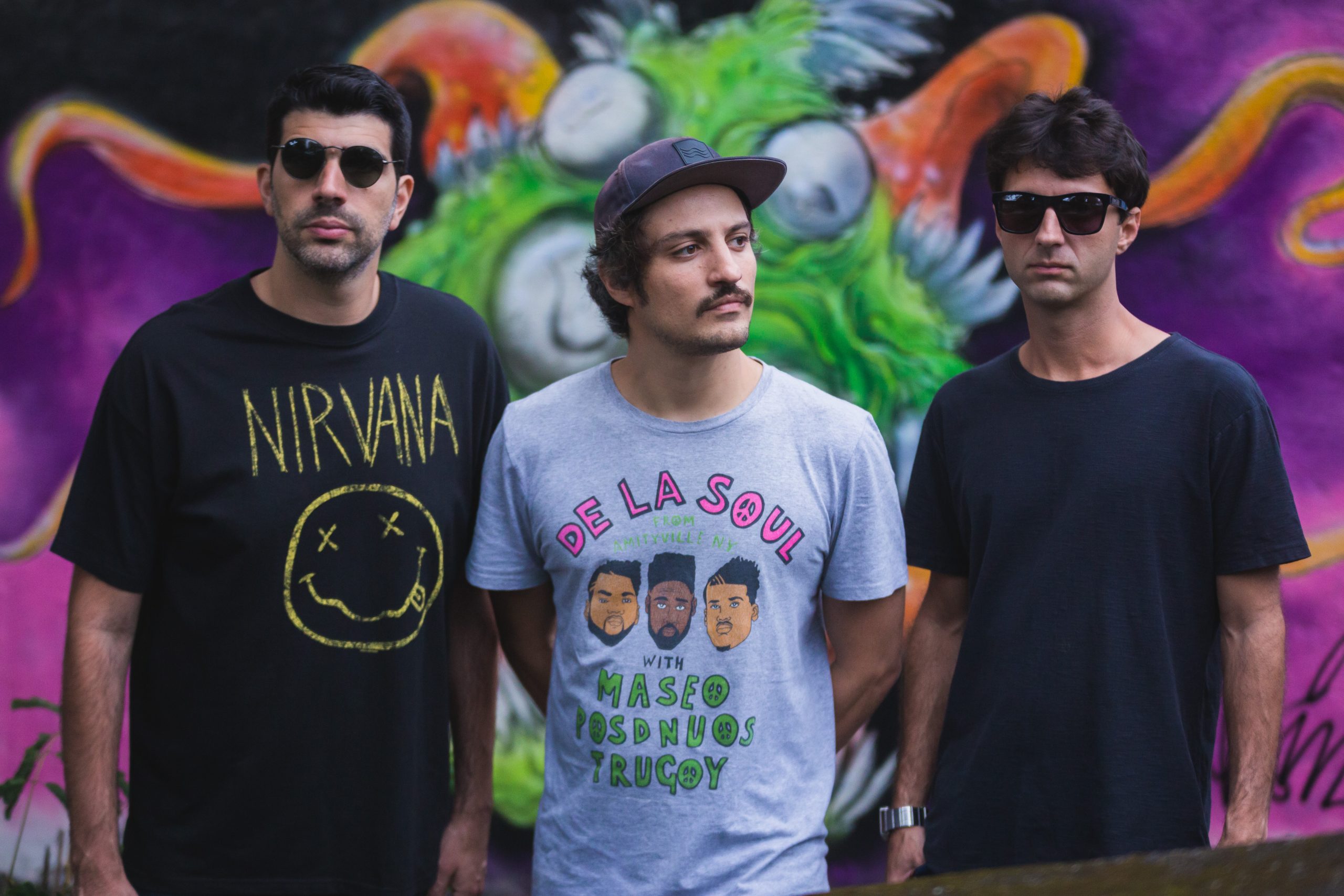 [INTERVIEW] Rio de Janeiro’s Underdogs Music head honchos chat with us about their newly-minted, self-titled imprint, the story behind the project and upcoming releases on the label

Brazilian outfit Underdogs launched their eponymously titled label this year. We caught up with them to discuss their music, the home city, their influences and more.

Hi chaps, thanks for taking the time to talk to Music is 4 Lovers. Can you please start by telling us, who is behind the Underdogs project and let us know a little about each of you?

The Project started in 2016 and was founded by me (Rodrigo Morgado) and Ricardo Salim. I started to study music at 11 years old and have been a guitar player, having bands and some other projects since then. I was always mesmerised by electronic music since getting into the French Touch scene during my teenage trips over to France and had a deep desire to spread this music. Salim has always been passionate about music and had been a wayfarer, travelling around experiencing music and events all around the globe. We had been close friends for years and were making a lot of those travels together, after some of those we decided to start a music label.

The mission was to create a label that would work as a channel to spread the good music and the overall experience we were having abroad, with the Ibiza underground scene as our main reference. Salim was always a key member in deciding our direction and planning backstage etc, and I was Djing and responsible for the music curatorship.

So, we started to assemble our DJ Team, with names from the local scene that shared the same passion of music and would embrace our mission. The first who joined was ICLE, which was a fresh name in the scene here but really impressed us because of his relentless dedication to music production, research, and his passion for the same style of music that we wanted to spread.

One year after we are already making a buzz in the scene, we were surprised to learn that one of the main names here, Bernardo Campos was keen to play our parties, so quickly said yes, before he changed his mind. Bernardo is a DJ who is a truly key part of the underground music culture from Rio Janeiro, he started circa 2005 and had residencies in the most iconic clubs related to this sound such as Dama de Ferro, Fosfobox and Cave. He was also dissatisfied with the status of the scene and related to our mission, so he joined us.

In 2019 with our label already established here, Bernardo presented us to Alan Fack, a fresh name as well who has studied music a long time and quickly showed us his quality by making amazing sets in some of our local residencies. So, our DJ team was assembled, but we also have a 6th member which is Thiago Freitas (Iagon) who is our main manager for our freshly released Underdogs Music record label.

You recently launched the Underdog Music label. What is the idea behind the imprint and what musical direction will you be taking?

The idea is to replicate with our record label the same feel and vibe that we have in our events and appearances. It covers lots of styles or substyles that we are passionate about, we love styles that are not so much in the spotlight now but are timeless classics such as House, Disco, Detroit House, Acid House to name a few. We also love the freshness of the Afro House, Minimal Tech, Organic and so on. In the middle of it we try to put some of our Brazilian flavour with our MPB, Rock and some music from amazing Brazilian producers from the underground scene since there are plenty of those here.

You are based in Rio de Janeiro, what can you tell us about the local music scene there? Both now and pre-covid.

When we started in 2016, I felt the scene was having a backlash, underground clubs going through real hard times, lots of them closing, which unfortunately was not only a Rio issue, since clubs were closing worldwide. So, the alternative was in making events, which for the underground music in Rio has always happened but was something really niche.

Fortunately, some genuinely nice projects started to arise by then, apart of our own I would highlight “Festa Rara” which is an amazing party conceived by Francisco Frondizi, who had been living, working, and experiencing Ibiza for years. They always get amazing locations and bring great names such as Carl Craig, Miss Kittin, Laurent Garnier, Gerd Janson to name a few.

I would also highlight the incredible run we had with “Pato com Laranja”, a very high-end Gastro bar in the heart of Ipanema. We started making events by its sidewalks on Sundays as a sunset open kind of vibe, they were very successful always with quality music and very strict curatorship of who’s playing, with Bernardo Campos being responsible for it. With time it became sort of our headquarters, so if you are around the city and want to find some of us, Pato is the place to go.

It was also very noticeable in our main worldwide event, which is Carnival, that the Underground music was making his way into Rio, with some Djs such as Black Coffee and Guy Gerber making appearances in prestigious parties and vip spaces in Sapucaí (the sambe parade location). In 2020 carnival (which was the last one before our lockdown started) it was crazy the number of parties with underground music, Circoloco was here, we have made our own Underdogs party as well, and all kinds of labels happened throughout the carnival, it was really fulfilling for us to observe this evolution of the scene here.

In the pandemic the events were shutdown, clubs, restaurants, etc. Fortunately, we had reopened partially by late May, you can find bars, restaurants opened. Pato com Laranja is currently open but with restrictions and protocols being respected with only seated customers. We expect to have the scene resumed sometime around October this year, since we project to have reached the necessary vaccination.

The last year+ has been a challenging time for all, what has your personal experience been and what have you done to keep sane?

It has been tough for all people, especially for those working in the entertainment business, and for us it has been no different. For me personally it was hard especially in the beginning but I quickly realised I had to accelerate our plans regarding the release of our record label, and that had kept me sane, working.

I was really dedicating myself to music production and diving deep as well in learning about the record label business itself and everything associated with it. I was extremely fortunate to have run into people that really helped me a lot with it, such as Leo Janeiro who’s the A&R of Get Physical in Brazil and also Thiago who joined us, both of them have decades of experience with business and without them the launch of the Underdogs Music record label would not be possible.

Who are the artists that have influenced you most?

When I was a kid the first music I was influenced by without even realising it, was Michael Jackson, which led me to Paul McCartney, which led me to the Beatles. After that I became a rocker heavily influenced first by Nirvana, and later by Deep Purple, Iron Maiden, Pink Floyd, which influenced me in learning how to play the guitar. I soon got into Jazz artists such as Miles Davis, John Coltrane, Herbie Hancock, in the Brazilian side of it by the Funk/Soul, Bossa Nova, MPB such as Tim Maia, Tom Jobim, Marisa Monte to name few.

Away from the studio, what are your main passions and interests?

Apart from the studio, but related to music, I love the “diggin’” process of it, so I am always keen to learn about my favourite bands, and new music releases, DJs, and really to dig up in some “dusty corners”.

Apart from music, I love soccer, so I am always keen to watch Flamengo games, and even attended the 2019 Libertadores final in Lima, Peru, Flamengo vs River Plate with my whole family. I like to travel a lot, I have a wanderlust, even if it is a small trip, one hour and a half from here, which is the case for the small paradise we have here called Angra, which I go to often. I also like running and occasionally to play tennis (even though I should practice it more).

What do you have planned for the year ahead?

On the Underdogs Music side, we will have more 4 releases this year, making it 5 this year. We are also planning to be in NYC Halloween and have a party of our own, as we did in 2019.

We also plan to make a NYE event, something small and really special for no more than 300 people, in a beautiful new location in Brazil we will soon disclose.