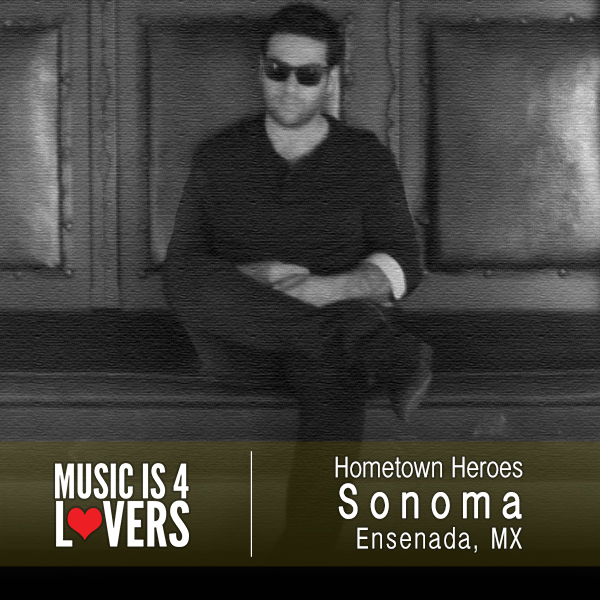 David Estrella aka Sonoma, co-founder of Audionik out of Ensenada, has been bringing his underground spirit to Baja California by producing some of the most respected parties in the region. With names like DJ Tennis, Phillip Bader, Barem, Bill Patrick, Matt Tolfrey, James Teej, and Bloody Mary already under his belt, there is no slowing down in the near future. Next up for Sonoma and Audionik is Baja Dream Festival, co-produced by Music is 4 Lovers, at Valle de Guadalupe in wine valley outside of Ensenada. The 24-hour party will feature headlining acts Thugfucker, Inxec, and Konrad Black, along with a slew of local DJs including Sonoma himself and Mi4L boss hogs Jon Dadon and Jimbo James. You can also check Sonoma’s Nowhere EP on NuLabel, which made it into the top 10 of Beaport’s minimal and tech house charts. We’re proud to add David to our Hometown Heroes series and bring some love back into Baja.

How did you got into house music?

First of all, I would like to thank you for the opportunity for letting me talk about my recent work. How did I get into house music? Well it’s a fun story. I started playing piano and some other instruments when I was younger; forced to by school. When I was growing up my mom arrived home with two of the legendary series of Global Underground (013 & 014). She told me people were listening to it in LA. Years later, she totally regretted it…

Tell us about your first party…

It’s been a while. I think 2007, not quite sure. However, I was talking with a friend of mine, Daniel “Kiki,” who was a huge part of Audionik. I say huge because he was the man behind all of the crazy ideas and who said let’s do it. We were talking about music and some parties and realized that Baja always had a house scene, which was great, but there was never a techno scene. So we decided to bring Acid Circus (LA). People reacted greatly and the madness began.

Tell us about your favorite party…

December 09 at the Audionik anniversary party with Konrad Black. The city was in complete chaos! It was pouring rain like never before! Nevertheless people started to arrive early, which was odd because people tend to arrive super late. We had a full house that night. Todd arrived with a bad-ass attitude (as usual, but we took some tequila shots, and as soon as he got in the booth, it was mayhem. His Berlin sound was something completely new to Baja. Definitely an outstanding night to be remembered in Ensenada.

Tell us about Baja Dream Festival…

Baja Dream is just an excuse to have an appearance held annually and show people the talent we’ve got here in Baja and have great special guests. It’s the perfect way to get out of the routine we all hate. To get out of the clubs and the city; escaping to a place in which you can do anything you want, dress as you want and break-free of the stress that consumes us all day, day after day, while enjoying music and art.

Describe the scene in Ensenada. How does Ensenada compare to it’s neighboring cities i.e. Rosarito, Tijuana, and Méxicali? Where does it differ?

Hard  question. At first sight, Ensenada looks like an ordinary small town; but in fact, this is where one of the most incredible labels in Baja live – Union Jack Records. We also have AO Mastering, the best choice in audio mastering. Mexicali’s people are party-animals compared to Ensenada and Tijuana. They have a bunch of talented guys there though, such as the MEXA boys Louie Fresco and Alex Rubio, Climbers, The Moon and Los Rombos. Finally Tijuana, home of my partners in crime, the Beatness crew, they are such dope and talented guys. You either love or hate that city.