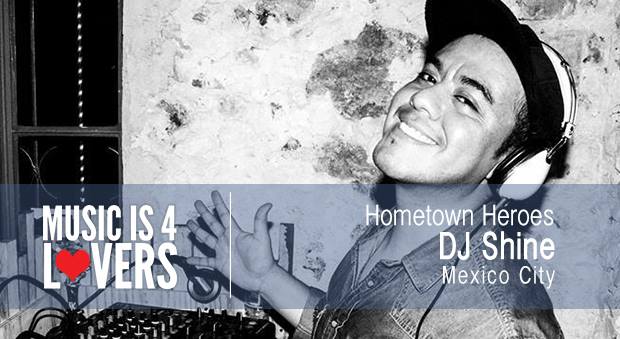 Shine is one of those guys we like to consider a Dj’s Dj. With over 18 years of experience under his belt and residencies spanning Mexico’s top night clubs from Rioma to Tara to AM; he’s been one of D.F.’s most respected selectors since the mid 90’s. He was awarded best Mexican DJ and best House DJ in the F.I.N.C. World Music Convention and has played venues from London to Venezuela to Costa Rica. Some consider him the precursor of deep house in Mexico, a genre he’s specialized in since 1998. He also has his own music management company and teaches music with more than 30 students graduated so far. This year he became involved with management for Mexican disco label Deep Sense and also plans to launch his own label Suave Records. Apart from his busy schedule with residencies and traveling, he also plays for his sponsors like Skullcandy, and is involved in the city’s skate scene with tournaments and afterparties for Vitamin Water and Nike.

Where are you from and how did you get into dance music?
I’m from the city of Mexico. I’ve been into music since I was a child playing bass and drums in a band, and have always had the sensitivity to listen to and collect music. When I was 12 I got into the world of skateboarding and that changed my lifestyle, my friends, my passion and my music. At age 17 I bought my first pair of turntables and started collecting vinyls. Every weekend we had a party or a birthday or something to celebrate with some of the skaters. That was when I started to be in charge of the music at every party and it was very fun to do even if not making money, I just liked to be around my decks and hip hop, drum & bass, break beat and house records. After a few months many people wanted me to play their parties and it began to be a job for me.

Tell us about the scene in Mexico City. Where are you playing?
Mexico is a very big city, there are always things going on, every week there are good parties and options for all tastes, there are good promoters and you can find line ups pampering you almost any given day with the best international DJs. Personally I am very happy with my job, I have several residences and a management team taking care of my dates at all the best places. I also play for my sponsor Skullcandy where I’ve been musically representing them in every event for the past two years. My favorite places are: Dinsmoor, GIN GIN and Janis.

Do you prefer playing in smaller or larger venues? Why?
There is a big difference in playing in smaller or larger places, but you have to know how to adapt to both. I played many festivals and places to thousands of people where I could apply my own musical approach and people danced to whatever… Now playing at a big place you have to get things really hot or play commercial stuff, electronic music has grown so much, there are parties and festivals all the time and many young people would rather hear a track that’s on the radio than listen to a track that has more soul but is less known.

What are some of the challenges being a DJ in a monster city like DF?
Again… Mexico City is very large. When I started this 18 years ago there were just a few of us DJs and each one had an original style, which was much more difficult to have back then because you could only do so with vinyls and that made it much better and more real. Now there are thousands of DJs downloading free tunes and playing hits from their laptop. They play to their crews and at their own parties for their own friends and they speak evil on one another to excel, but in the end they all play the same shit and have no original style so that is mostly why they are not on the map around here.

As for me I always prefer to be original and focus on music for what it’s really worth. I try to have fresh musical ideas and know where to direct my music. If I have to play house which has distinguished me for many years I will do so without losing my own touch. If I have to play in a bar or restaurant for an older crowd I make the changes that are needed. Every night, every event and every venue are different so you have to be prepared and be professional.

Anything exciting in the works for this summer?
I am focusing on production and on my studies. I am preparing a track for Get Down Edits, and soon I will launch my own label Suave Records which will be focused on soft sounds from down-tempo to house. I have support from some big-time friends from Mexico and also international producers that will be releasing on the label.

What is a typical week like for you?
I do a lot during the week. I’m passionate about sports so a normal Monday I’ll go swimming and to the gym and play squash at night. For my work I do bookings in some places so I’ll get the list ready and organize my calendar for the week. Tuesday, Wednesday and Thursday I teach DJ classes and I have more than 30 students already. In my spare time I’m in the studio producing, and Thursday, Friday and Saturday I usually have gigs and I also travel a lot.

What do you do for fun when not making music?
I like being with my girlfriend and to visit with my family a lot. Every day I play sports, I’m on two soccer teams in the city. I am also a fan of video games like fifa. I like to go out on my bike and go shopping for things that I’m obsessed with… I also enjoy watching a good movie or a show, and lately I try to go to sleep pretty early.