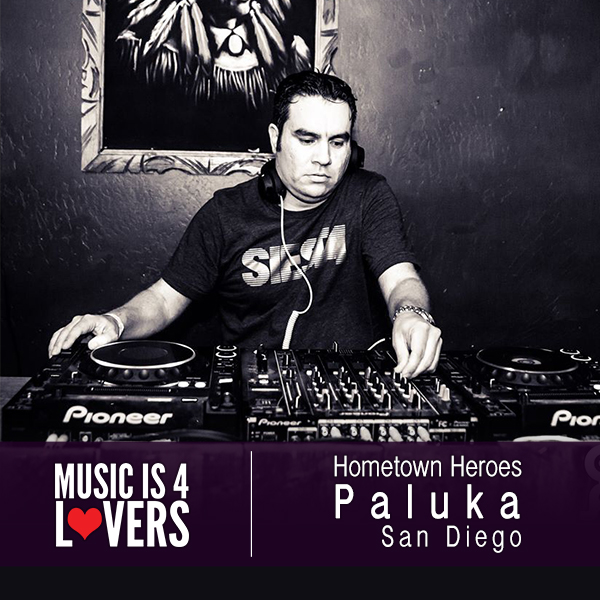 Bert Porcayo aka Paluka has been harnessing the underground house music scene in San Diego for over two decades. He’s one of the most influential persons contributing to the thriving dance floors in SD. Party after party, Paluka, along with partners in crime Halo and Cris Herrera, continuously deliver legendary DJs such as Doc Martin, Sneak, Harvey, and Apollonia to the huge crowd they’ve built over the years. To boot, he operates his own label Siesta Records, with a stellar roster that includes Steve Lawler, Hector, Guti, and Halo to name a few. We’re proud to have Paluka as a fellow DJ, promoter, and friend doing his thang here in beautiful San Diego, and to have him as our next guest in the Hometown Heroes series. Press play and read the interview below for a glimpse into the life of Bert Porcayo.

How and when did you get your start into house music and DJing?

It started back in 1992-1993, out of high school with nothing but time on my hands. I was into hip hop and new wave stuff back then and at the time only been to clubs in Tijuana, México; which was the only place I could go to with a fake ID until I was invited to an 18 and up dance party in San Diego. The party was called The Guf; that is when I first heard house music. I met so many good people there, people that are still my closest friends and work with to this day. I was blown away with what I was listening to and the feeling I experienced that night. I didn’t know who was playing until I asked the people at the door. They told me it was Doc Martin. He played all night long and would come to play every week after that. The following week I bought my first house records, mixer, and Technic turntables. It took me a minute but I learned to mix on the floor in my bedroom.

How did Siesta Records come about? Where does the name come from?

Between 93-96 I was really into the rave scene along with my closest buddies. Raving week to week, driving to LA or SF, always looking for the next party. We had such great times. My buddies would say, “Lets do our own party,” and since we were helping other promoters at the time spread the word and promote, we had a good idea of what we wanted to do. When we did our first party we didn’t have a name for our production group. We just did a few parties with names that I don’t remember anymore. One morning the name Siesta came to me after a great night of dancing. Around that time my buddies and I had been buying so many records. One of my good friends would tell me, “Bert, you should start a record label.” They asked me to invest in a couple of records to be released, which I did. They were some experimental techno records. I made no money but I learned the process of making and producing a record. I then released another record by DJ Spun under the name Siesta Music. I released quite a few more after that. After a few years I opened a record shop in downtown San Diego, which of course I called Siesta Records.

What do you find is the biggest challenge running a record label?

Nowadays the biggest challenge running a label would be generating revenue. Since the days of record sales are gone, relying on downloads and licensing make it hard to generate money. You have to find creative ways to make money as a label. Parties and merchandise help, but you need to be creative.

If you gave one piece of advice to an aspiring promoter, what would it be?

Don’t do it! HAHA! You must be in it for the long haul.

What’s your drink of choice?

Next up for Paluka and Siesta…