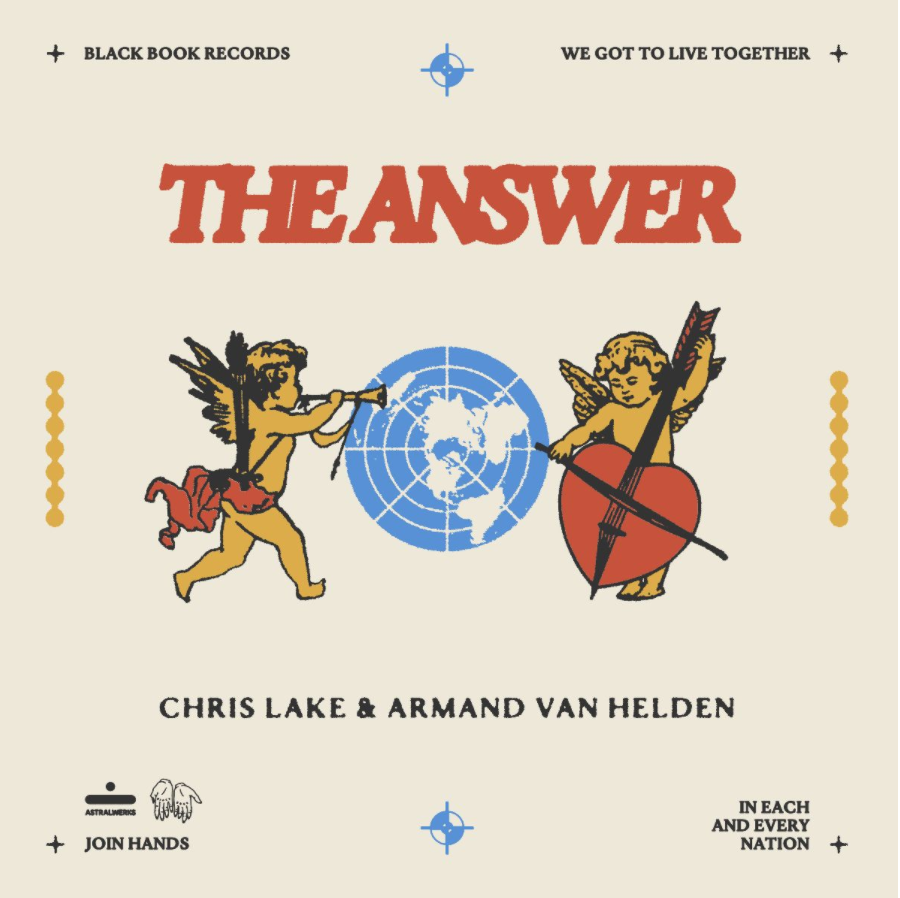 The Answer – a remarkable four-song collaboration from Chris Lake and Armand Van Helden – will be released on December 11 by Black Book Records/Positiva. Today, the legendary producers shared the lead single and title track, “The Answer” ft. Arthur Baker and Victor Simonelli. Download / stream “The Answer” HERE.

The anthemic song sets the tone for an exhilarating EP that, amid its irresistible grooves, reminds us to ground our actions in love. “The Answer” samples “Why Can’t We See” by Blind Truth ft. Tata and Toney, which was written and produced by pioneering producers Arthur Baker and Victor Simonelli – a soulful 1991 plea for unity that pulses with renewed relevancy.

“It gave us our mantra for making the record: love is the answer,” explains Armand Van Helden.

The English-born, Los Angeles-based Lake grew up making music in his bedroom, emulating artists like Van Helden, one of house music’s most revered figures, whose career spans three decades. Lake has since amassed his own series of chart-topping hits, earned a GRAMMY® nomination and founded the acclaimed independent label Black Book Records.

“I bumped into Armand in Miami at a pool party and we exchanged emails. A month later, he hit me up and floated the idea of working together,” recalls Chris Lake. “I suggested I go work with him in Miami to get some intensive days in together.”

The two artists clicked from the moment they sat down together in November of 2019. Lake says, “The vibes were flying after we sat down on the first morning, chugging coffee, visualizing what could be made.”

Recalls Van Helden, “The title track came together so quickly. We just followed the energy in the room.”

The EP provides a much-needed dose of sheer bliss in these challenging times. The uplifting “Feel So Good” percolates with joy and sensuality while “Work!” is an effervescent, four-on-the-floor dance number. The groovy, silken “Dubai Dublin,” perfectly rounds out The Answer. That such a consequential project should come out of an accidental meeting is nothing short of kismet.

As house music continues to dominate the global electronic scene, British producer/DJ Chris Lake has cemented his status as one of the genre’s most compelling and massively successful artists. With a monumental discography that includes a series of chart-topping hits and a GRAMMY Award nomination, the L.A.-based musician has toured across the globe and brought his explosive live set to virtually every major music festival.

In a bold new chapter, Lake himself and his pioneering record label Black Book Records recently signed to Positiva, setting the stage for a barrage of new releases – including the timeless and transcendent single “I Remember” and upcoming collaboration EP, The Answer, with Armand Van Helden.

Lake launched Black Book in 2016 and scored his first smash with “Operator (Ring Ring)” feat. Dances With White Girls – a #1 SiriusXM hit, named “Hottest Record In The World” by BBC Radio 1 host Annie Mac. Although Lake initially founded Black Book in order to put out his own music, he soon began releasing tracks from such acts as Walker & Royce, Goooey Vuitton, and Wade, pursuing his passion for developing artists and empowering his signings to make significant gains global touring and streaming. Upcoming Black Book releases include music from Eli Brown, Noizu, Cloonee, Ango Tamarin, Biscits, and many more.

Armand Van Helden bought a drum machine when he was 13 and started DJing two years later. His numerous hits include “Witch Doktor,” “Bonkers,” “U Don’t Know Me” “I Need A Painkiller” and “My My My.” His full-length albums include Old School Junkies: The Album, Enter The Meatmarket, 2 Future 4 U, Killing Puritans, ‘Gandhi Khan, Nympho, Ghettoblaster and Extra Dimensional. Over the course of three decades, Van Helden has headlined clubs, festivals and special events around the world as a DJ.

In 2009, Van Helden founded the duo Duck Sauce with fellow DJ/producer A-Trak. Their single “aNYway” hit No. 1 on the U.K. Dance chart while follow-up single “Barbra Streisand” earned a GRAMMY nomination for Best Dance Recording and topped the charts in 12 countries.

He is also considered one of the best remixers in the business – nominated for a GRAMMY in 1998, the year the Remixer Of The Year, Non-Classical category was introduced, and remixing such artists as Katy Perry, Sneaker Pimps, Rolling Stones, Sam Smith, Britney Spears, Daft Punk, Tori Amos and Disclosure.

In early 2020, Duck Sauce unleashed a series of new songs and Van Helden released his new single, “Give Me Your Loving” ft. Lorne.