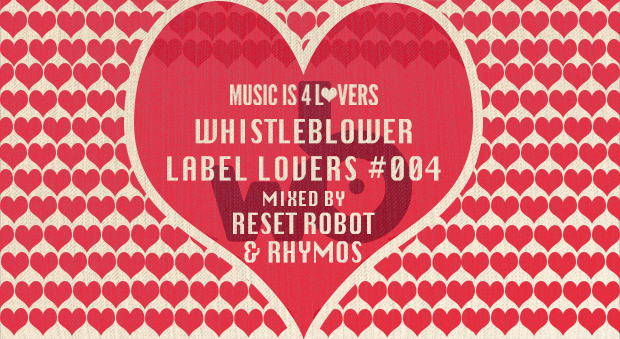 Based out of Southampton, Whistleblower Records was founded by four friends in 2014: Alan Fitzpatrick, Reset Robot, Rhymos and Con Fraser.

The label primarily features original music from the owners themselves, but has included such artists as Mark E, Mister Woo, Trus’me and Customer to their young catalogue.

Take a ride down Whistleblower lane with the #004 installment of our Label Lovers series. The exclusive podcast features only music from the label — past, present & future.

Track list and a brief Q&A with Alan Fitzpatrick, Reset Robot and Rhymos included below…

What made you decide to start Whistleblower?
The chance to do music and collaborate on something creative with my mates.

Describe the Whistleblower sound?
A cross between blowing a whistle really loud and the sound of people secretly telling tales on each other.

In your opinion what has been Whistleblower’s proudest moment to date?
The day Aaron gave birth to Dave while I cradled them both in my arms, I almost cried lol. In all seriousness I like how the project gives me freedom to have fun with music and spend time with my friends.

What made you decide to start Whistleblower?
We all like music and are all heavily involved in the scene. It seemed like a good idea and the right time to try something.

Describe the Whistleblower sound?
It’s a bit of everything electronic. House , techno, broken beats, synths, samples and all that!

In your opinion what has been Whistleblower’s proudest moment to date?
Having the labels music played by lots of DJ’s across the world!

What made you decide to start Whistleblower?
We started Whistleblower to give ourselves a platform to release our own music really, we like the idea of trying to push the local talent too. One of our early releases was from Mister Woo who are a local band. It’s nice to have total control of the output and have the freedom to be able to write music without worrying if it is gonna be picked up by another label.

Describe the Whistleblower sound?
We don’t really have a sound as such. We like to be as diverse as possible. Personally I like labels that keep every release as varied as possible. Its nice to keep people on their toes and not get pigeon holed by a certain sound or genre.

In your opinion what has been Whistleblower’s proudest moment to date?
I think when we released Alan Fitzpatrick – Tribe was a good moment. Pretty sure it got to number 4 in the Techno charts.

Be on the lookout for the next Label Lovers episode from Seven Villas Music!