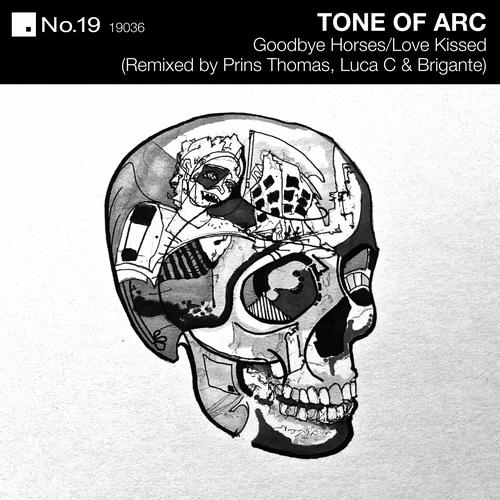 No. 19 revisit the recently released, critically acclaimed Tone of Arc album The Time Was Right for the next EP. Disco king Prins Thomas and Southern Fried duo Luca C & Brigante remix two key tracks fro the album to fantastic effect. First up we have Prins Thomas, known the world over as one of discos foremost innovators, he is boss at the Internajsonal label and has his own singular sound that takes its cues from prog rock and kraut as much as disco past and present. Here he reworks Goodbye Horses into an even more lovelorn, dubbed out and slow burning disco licker than was the original. Laced up with a cosmic 80s vibe, innocent melodic stabs and his usual celestial synthesizers, its a mature and patient track that rewards your close inspection on every level. Deservingly hyped Italian duo Luca C & Brigante then offer two remixes of Love Kissed. Mouse With No House Mix goes first and strips back the poised and purposeful, low slung and sun kissed funk of the original into a deep and space house jam rich with glowing harmonic melodies and a slowly churning bottom end. A perfect set builder that teases with acid as much as it rewards with its inviting chords. The duos second remix of the same track is even more heavyweight and heads down as you’d expect of something called a Warehouse Dub. The duo allows plenty of space around their arrangement for the deepness to really sink in. Their finely balanced, groove inducing claps and hits churn along at an oh-so appealing pace that manages to both sexy and serious. This is a finely thought out remix packages that breathes new life and fresh angles into Tone of Arcs still standout originals and will likely see them rolled out plenty more times this summer.