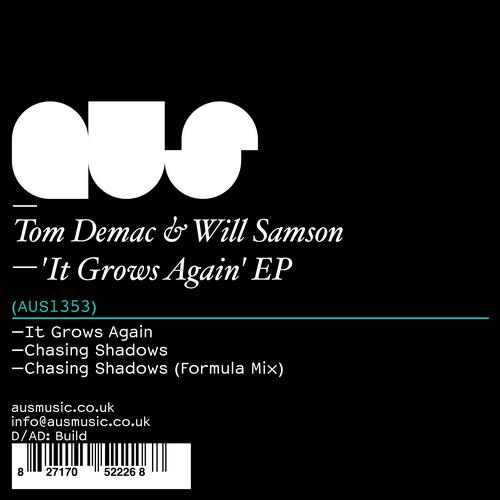 After a string of releases on Drumcode Records, Pets Recordings and Hypercolour, Tom Demac has joined forces with Will Samson in a somewhat unlikely pairing for their debut release via AUS. Following on from AUSs celebratory 50th release from Deetron, a surprise re-release of Sei A and another solid EP from Dusky, this release takes the label along a more expansive and less dance floor orientated route.In 2012 Tom Demac established himself as one of the UKs most exciting producers after widespread acclaim for Critical Distance Part 2. He followed up this success in 2013 with collaborations and remixes with Glimpse such as L-Plates. On the other hand Will had been touring indie venues with Kurt Vile, Marissa Nadler, Shearwater, Ólafur Arnalds off the back of his newly released LP, Balance an album of hazy, ambient & intimate tape recordings.

At the end of 2012 Tom stumbled across Will’s album, although on opposite sides of the musical spectrum, the two shared a similar ethos towards their work passionately creating, but never taking themselves too seriously. Having both experienced the recent and sudden loss of close family members just a few short months apart from each other, it was clear that there were both in need of a cathartic outlet.It Grows Again and Chasing Shadows reflects these experiences with a striking blend of wistful vocals and ambient guitar swells from Will Samson and Toms distinctive grumbling and weighty bass lines. The final track on the EP is Tom’s formula remix which seeks a more 4 to the floor approach, led by punchy beats and groove rather than intricate vocals.Tom Demac will be complementing the build up to the release by playing gigs and live shows across the Netherlands, Germany, Ibiza and the UK.