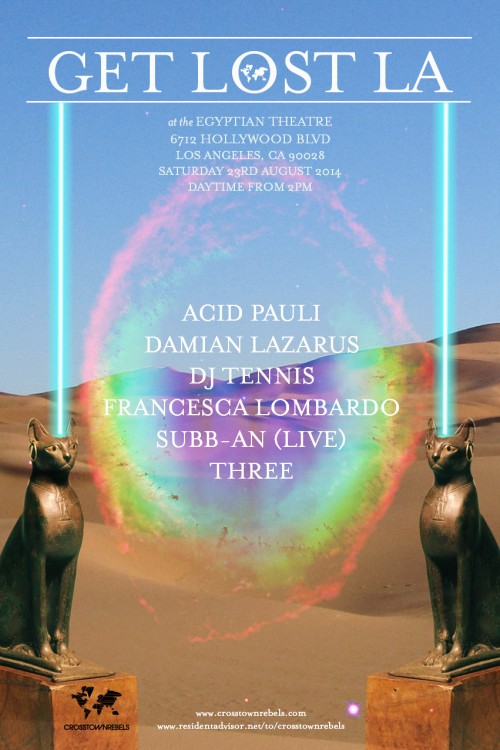 Get Lost is fast becoming one of LA’s favorite late summer rituals, a bewitching day and night session, gathering the city’s Rebel Ravers, discerning dance-heads, and those adventurous pilgrims about to set off for the Black Rock desert.

This August, Get Lost returns to the other-worldly environs of the Egyptian Theatre – a venue steeped in the era of a bygone civilization; a bastion of mysticism, spirits, Gods and Demons. At a time when US mainstage dance music becomes ever more bombastic, these themes of spirituality have increasingly come to define the dance floor explorations of Lazarus and his Crosstown Rebels crew, notably on Lazarus’ forthcoming live album project.

It is fitting then that Get Lost LA will see the introduction of a brand new sonic experiment from Lazarus, four DJs casting one truly magic spell. Wizardry: The Get Lost Afterhours will feature Acid Pauli, Damian Lazarus, DJ Tennis and Three playing back-to-back all night at Create after the opening set from Bill Patrick. Anyone who has caught Acid Pauli’s 18 hour sets at Berlin’s iconic Bar 25, sampled the punk-techno and disco of Life and Death’s revered founder DJ Tennis, or been aware of Three’s historic impact on the US dance scene will know that this trio alongside Damian Lazarus, is a set not to be missed. Dance floor Wizardry at its finest.

During the day Crosstown Rebels will take over the courtyard of the Egyptian Theatre, bringing other-worldly outdoor revelry to the heart of Hollywood. The aforementioned talents will all take the turntables, and be joined by the fast rising Rebels’ starlet Francesca Lombardo and one of the UK’s most promising live acts Subb-an.

2. Share this post on your wall and tag Musicis4lovers and friends you want to bring with you.

Winners will be chosen on Friday August 22nd and your name will be put on the list +1. REMEMBER – The more you share this post, the more likely you are to win, so share away and follow us to stay up to date!