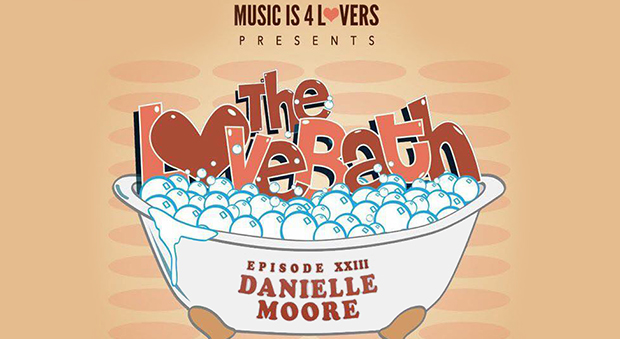 Crazy P leading lady, Danielle Moore, drops by to give us a lil’ sensual scrub in the tub on this month’s LoveBath episode.

We’ve had our eyes on Danielle for quite some time now, so to have her finally lathering on the disco bubbles for our monthly cleansing is fabulous!

Dip your toes in, the water is warm! While your body soaks check out the interview below to learn more about Danielle…

Hi Danielle! Thanks for talking with us!
My pleasure of course!

How is 2016 treating you so far?
2016 has been a good year. More writing with a sprinkling of quality gigs mainly around the UK. Looking to get some EPs out and the 3 of us are working on solo stuff with a few collaborations on the horizon.

How was it that you first started singing whilst DJing? Did you have any kind of set-up at home?
The sound system mainly came about through having a smaller more mobile alternative to the full live band. Whilst the full live band is what we prefer to convey our own music, its not always the most practical to take on tour. It was an opportunity to intersperse our dj sets with primarily our own tracks through live singing. It gives us a different dynamic to a straight dj set and often the opportunity for us to connect personally with the crowd. It invites a party atmosphere (we’d hope 🙂 )… I do practice at home but mainly in the studio with the lads. They keep everything tight and make sure the sets flow. It has served us well so far.

Was there a particular song that felt like your “big break”? Was there a certain moment you realized music would be your full time biz?
I suppose for me “Started Something” was the song that gave me an identity with the band initially, and then after that “Sunscience” was always a song people asked for again and again. I think for me a turning point though was “Stop Space Return” as it’s a good dance floor combo of disco and house. I still feel very fortunate to be able to do this full time. Some months are more fruitful than others and we don’t take anything for granted. I think striving to be better at what you do is a good thing but I am lucky to have some good support around me. I had to make a decision to knock full time work on the head as traveling with our music became more regular. Its been a good decision!

We loved the mixtape you did for AQ/AQ a few years back. Those mid-tempo jams are largely under appreciated in the dance community. Are you looking to do more of that kind of music?
Always looking to make alternative music whatever the genre. I think its good to keep your mind open to that and not just stick to what you think people expect of you ..that is of course if you like different genres of music . I think mixing tempos and textures is key to a good set.

We recently picked up the Unity 4 Utopia album, which you collaborated on. What was it like working with Lay-Far and Inkswel? Also how was working with Bosq on the Tumbala EP?
They are all lovely lads and it was my pleasure to be able to offer something to them. Im a massive fan of inkwell and the rest of his album is fabulous. Bosq was introduced to me through a mutual friend …collaborations are something Ive only recently got involved with but it was great to be able to hook up with some of the good guys in the music industry !

We’ve been huge fans of yours since the beginning, but whom are you a fan of musically?
Broad and wide as it gets really. LCD Soundsystem, Hercules and the love affair, Roisin Murphy , Grace Jones, Gramme, Ron Basejam, Hot Toddy, Red rackem, Move D, Lindstrom….hmmmm its difficult to rein the whole thing in to be honest!

Can you tell us about any new releases or collaborations you’ve been working on?
I’ve done a few various things with Steve Cobby from Fila Brazillia, Mason, just working on something with Craig Bratley, D Pulse …a few more in the pipeline. The lads are always collaborating with various solo artists, singers and producers and have an album out called White Elephant made with a guy called Ben Smith which really is beautiful. Like I said we are all working on a series of EPs which we hope to be out over the summer indeed autumn time.

Let’s talk about your mixing technique. Is there any approach you particularly like? Any tricks you wish you had learned sooner?
Ha ha! Mainly I think mixing is down to programming. You can mix anything really but it doesn’t mean to say its a good mix. The flow of music is important. I think not being afraid to drop the mood and creating ebbs and flows of energy is important. I love the effects settings on the Pioneer-really good for those tricky disco mixes…its good to drop bass beats out for a while then nudge them back in so the crowd get chance to have a breather and you get an opportunity to raise the roof when you bring them back in. Im no mix technician …I just love playing!

Drink of choice?
It would be brandy if it wasn’t so dirty so I’ll say Tequila … it’s cleaner. Maybe with an umbrella in it. Adds to the fun!