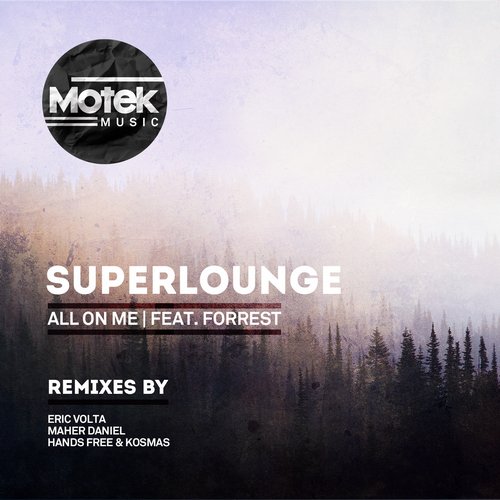 Superlounge feat. Forrest – All On Me (Motek Music)

Motek Music marks its 8th release with Superlounge ft. Forrest ‘All On Me’ and a collection of remixes from Eric Volta, Maher Daniel and Hands Free & Kosmas. Superlounge have seen a number of releases on imprints such as Audiofly’s Supernature, Alex Niggemann’s Soulfooled and Noir to date. For their debut on Motek, ‘All On Me’, the German duo deliver a groove steeped in ethereal harmonics and ghost-like vocals, courtesy of the multi talented Forrest. First up for remix duty is Eric Volta, responsible for one of the most played tracks of 2013 ‘Love Your Illusion’ which also secured a place in DJ Mag’s ‘Top 10 Tracks of 2013’. For his version of ‘All On Me’ Volta laces rippling drums and hypnotic beats around whirring space-like atmospherics, shuffling snares and a repeated spoken word vocal to create a profound and powerful record. As a Get Physical affiliate and resident selector at Montreal’s world-renowned club Stereo, Maher Daniel doesn’t disappoint with a dynamic re-imagining, using rumbling bass beside warm tones and alternating synths. Finally, Greek producer Kosmas joins forces with Dallas-based Hands Free to re-create a vibrant and multi-latered version of ‘All On Me’. The pair work dreamy chords and soft pads over rolling drums to evoke a melodic dream state vibe for the release’s final offering.