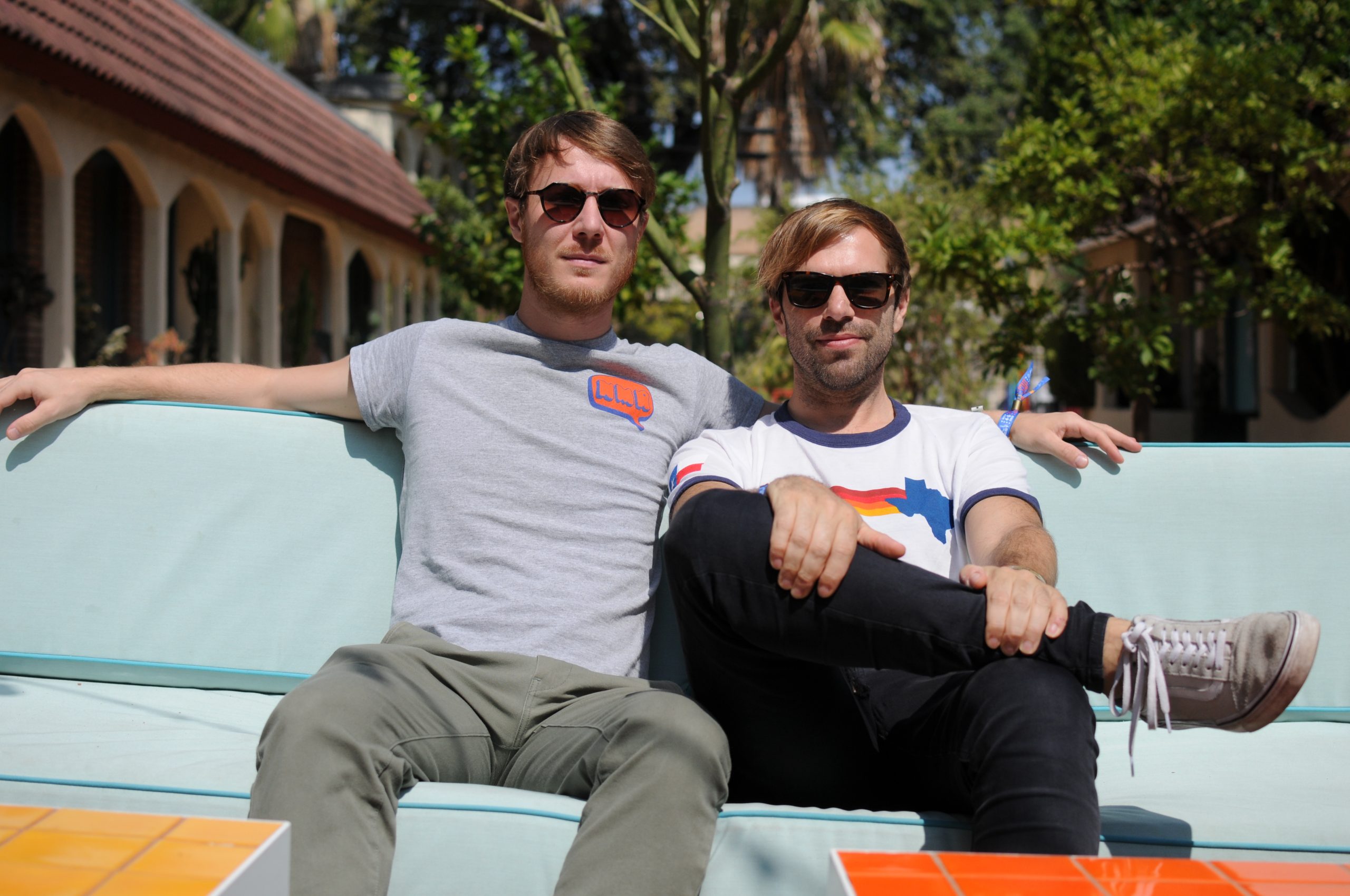 It’s a big one. Americana disco wizards the Flying Mojito Bros have worked their magic on Rudy Norman’s cult AOR track, and in so doing have, in the words of Rudy himself, “brought Back To The Streets to the future”.

For the first time, Back To The Streets (1980) finds itself remastered on 12” vinyl alongside official remixes commissioned by the artist, in a welcome new package that will please lovers of glistening disco reworks as well as those seeking a vinyl copy of the original track.

The sun-baked electronic disco ‘refritos’ arrive in three versions to suit all occasions – straight up, extended dub and radio edit – and no doubt have the potential to resonate with the huge worldwide desire to get back out there and bond meaningfully with our fellow brothers and sisters in public.

It looks the part too, with Flying Mojito Bros also directing a colourful and cosmic reimagining of the original cover art via illustrator Nick Potts, reflecting the bros’ transportation of Rudy’s West Coast vibes into one of their own Southwestern desertscape settings. 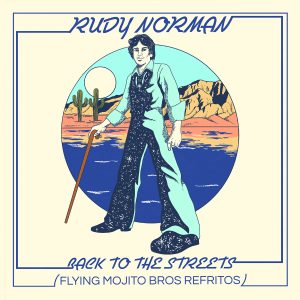 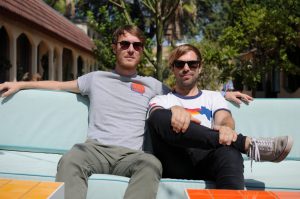 Your name is one we feel I’ve known for a long time. How long have the Flying Mojito Bros been around?

Five years apparently, but also both forever and no time at all.

Does the name have anything to do with throwing cocktails?

Zero! But when we’re feeling self-absorbed and google the name for any coverage we may have missed, it does turn up stories of people going loco and chucking their drinks about. Usually plane passenger meltdowns.

Tell us when and how the FMBs came to pass? What brought you together?

A catalyst. Supreme guitarist Adam Chetwood (Ben’s brother) played with an amazing band called Black Peaches – we were invited to go and watch the first gig of what someone called “the new jazz band he’s in.” The description of course was misleading, meaning their live gumbo of voodoo-country, rock-jazz-funk-disco positively blew our minds as not only is insanely good, but it was totally unexpected. Once we’d seen and heard them and realised there were other serious devotees to that kind of music we love, we suggested we DJed at their next gig, creating a few edits for it, and that was it. We were off.

Ben you’ve been a producer for some time. What other music have you been involved in?

The first production and writing project I was involved in was Dief & Baker – a melodic house and techno duo active from 2011-2015 (but actually recently revived!). As a producer for other artists, I’ve also worked with Damian Lazarus and Little Boots a lot along with other lesser known names. I was and am a session musician before I got into producing so I’ve always approached my production with a musician’s head – I love working with real instruments as well as synths and machines.

I read that Jack is the collector and DJ. Have you still been searching for records the last year? How do you source your music Jack? Are there any dusty desert records shops that you frequent?

Totally. I’ve dug everywhere I’ve still been able to – loads of digi digging and also into the unexplored regions of my own modest record collection. I’m especially looking forward to returning to bricks-and-mortar shops of course – an old favourite is Eldica Records in Dalston, at which at least three hours of rummaging/listening time almost always pays off. So many unshazamables / non-discogs treasures to be found, particularly from the Caribbean.

You been very active as DJs. How has the past year been for you both without gigs? How have you kept yourselves motivated?

We’ve definitely missed it. Not a lot tops playing music you love, loudly, in the sunshine and the satisfied smiles of hundreds of people cutting loose. We’ve been pretty self-motivated through producing lots of new music, turning these into mixtapes and releases, and planning our return to the great outdoors. It all starts with this Rudy release and ramps up from there…

Your style conjures up images of dusty desert discos, Mexican heat and the faded colours of the 70s. What is it you love about the seventies?

Just looks fucking badass doesn’t it. Attempting to deconstruct what makes that vibe visually very alluring will evaporate its mystique maybe so better keep a lid on it. But it’s definitely super enjoyable to work with.

Sonically, we love the meeting of the decade’s technological advances with the spectacular musicianship from artists and players who’d by then devoted their whole lives to the art. It must have felt like a very exciting brave new world.

Back To The Streets is one of those hallowed tracks, well known in collector circles but still feeling very familiar to those who haven’t heard it before. What do you think it is about the original makes it feel so warm and familiar?

That’s so true! It does have a familiarity about it – but that’s the mark of a great poppy hook, no? In combination with the relatable lyrics.

Do you know much about Rudy Norman? Is Back To The Streets the only record he ever made?

We’ve chatted quite a lot with Rudy of course during the making of these remixes, but not about his backstory. We know that another blog is interviewing him about it for this release, so looking forward to reading that ourselves.

So Rudy actually got in touch with you to do the remix. That’s very cool. How did that feel? Was he following your music then? What was the lead up to that?

Yeah it was a real bolt from the blue. He has a very generous and warm spirit in the way he writes his emails, he seems to be a proper “character”. Would love to meet him in person! He came across us on the much-revered AOR Disco blog. It’s cool to know he has his finger on the pulse.

Ubiquity Records is a very special label to be part of. Have you been big fans of the label in the past? Do you have a fave from the Ubiquity catalog you can highlight?

Yes, it is really special and we feel very lucky to have landed it. Jack had developed a relationship with them a little a few years ago through working for the Spiritland music and hospitality company, with the label shipping him a box of records over to play on their insane sound systems. That was the ‘in’. Favourites? We love how Ubiquity’s output straddles re-releases and contemporary output. So perhaps the classic soul of Mike James Kirkland and Gloria Ann Taylor, anything from Shawn Lee / Mama’s Gun (nod to their combined yacht rock efforts as Young Gun Silver Fox) and the latino-disco dancefloor joy of Bosq.

The title ‘Back To The Streets’, could not be more timely. The world stopped spinning for a year, people stopped connecting. Did this release happen by chance?

It’s pure celestial happenstance, and we love that.

Talk us through what you have done to the original track?

Modernised it, would be the short answer. Taking the original excellent ingredients, stretching out the arrangement a little to maximise some of those great tension/release moments, and adding some proper welly.

To bring it in line with our usual sound, we’ve turned it from a pop/rock track into a modern disco track. Primarily by speeding it up, but also giving more energy to the rhythm section and adding a four to the floor drum beat and Moog synth bass.

You made an edit of Neil Young’s ‘Tonight’s The Night’ recently.  What was your inspiration for that project?

Ben: Jack brought a track to a DJ set which was an edit of Black Sabbath’s Planet Caravan by an artist called BALAM. I thought this was genius and tried to imitate it but using a sample from Tonight’s The Night – a track that I’ve loved for years and have noticed how suitable for a remix (both lyrically and musically) it would be. The result was quite different to the inspiration, but that’s the beauty of art hey!

You seem to be in a lane that is quite unique in terms of genre. How would you describe that lane?

Americana Dance music. And we’re the only vehicle for miles.

You strike me as folk who don’t follow trends. What artists are you into?

Jack: We are seriously unfashionable, you’re right on that one. We love tons of different music, but for FMB are especially drawn to the underdogs and misfits from the periphery of the 70s / early 80s country music scene. Not the middle-of-the-road George Strait kinda shit, but the country cats who played what is effectively funk, groovy rock and sometimes even disco. Definitely the ones that dabbled with disco (we’ve a mixtape in the works focusing on this). Tony Joe White is king here. Plus the likes of Bobby Bare, the Cate Bros, Travis Wammack, Carlene Carter… the list is satisfyingly endless.

Ben: I’ve always been drawn to older and American music. In particular music from the 70s golden era (in my opinion) – a time when the industry was a bit more true to the artist and the music not so business driven. Little Feat, Steely Dan, Crosby Stills & Nash, Gene Clark to name a few that are the inspiration for this project. But as well as that, I tend to gravitate towards music that’s groove-based. I suppose one of the mission statements for this project is to fuse all those things…

What’s the best musical advice you’ve ever been given?

Jack: A well-known industry head once said to me “There are two rules. 1. You don’t ask, you don’t get. And 2. Always be polite.”

If you weren’t working in music what do you think you would be doing?

Jack: Hah, well, I think I’d probably run the marketing for a fledgling hospitality firm, particularly one with a wine bar in North London.

Ben: I’d definitely own a ranch in Texas.

What should we look forward to with the Flying Mojito Bros this summer?