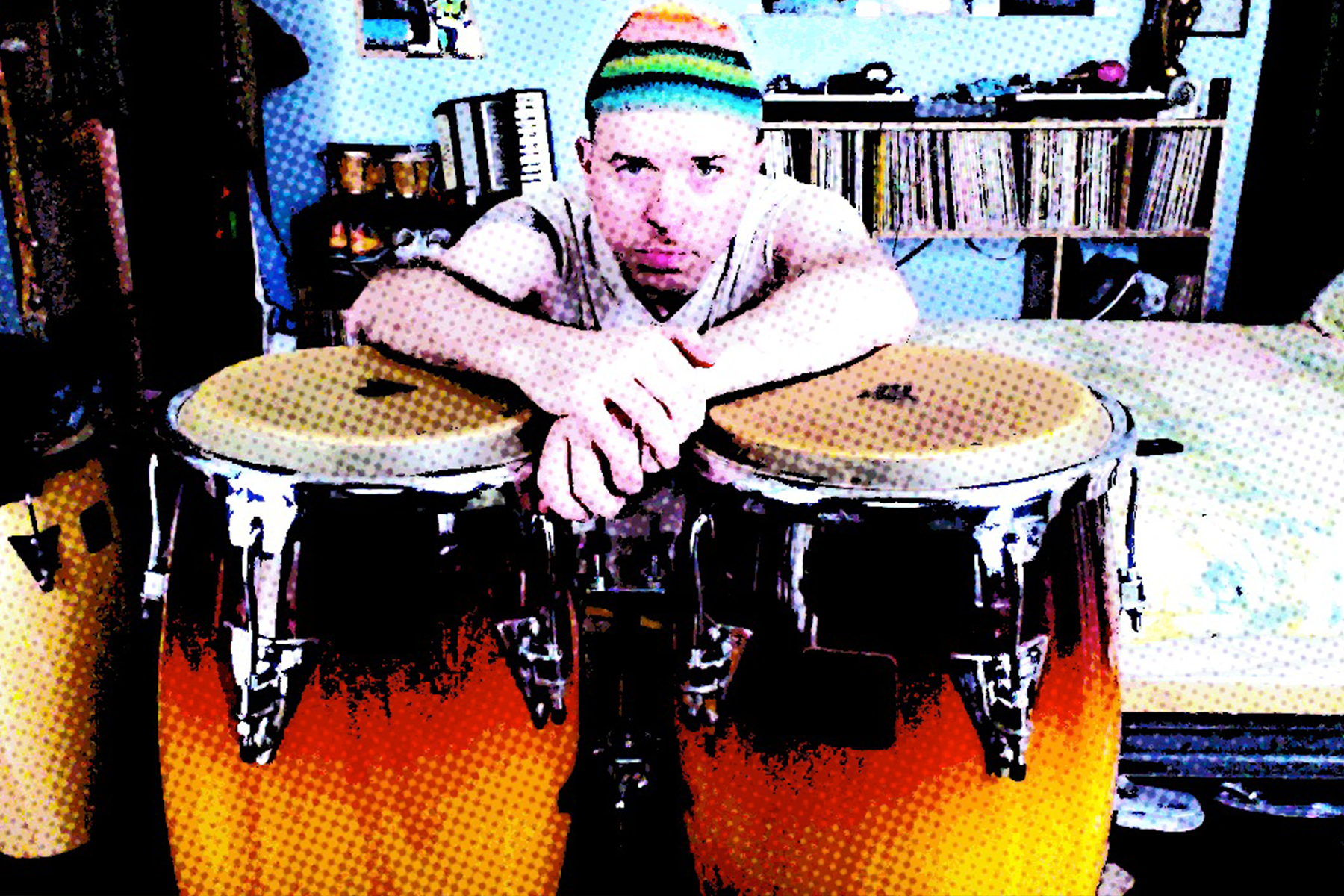 PREMIERE + INTERVIEW — North Satellite – Love Is On The One [Startree] [MI4L.com]

Continuing the vibe set in motion by number 003, and in a timely shift away from the elevated tempos of the club, Startree slows it down just a bit more for its fourth go-round, raising its sonic ceiling and lowering its floor. The sensuous, broad-minded sound on offer here is the brainchild of one Mr. Eugene Tambourine, a name one can expect to be hearing a lot more from in coming months, given his distinct, energetic-yet-calming amalgam of musical delicacies, perfect for these shifting times.

“A Rising Sign“ somehow recalls salsa without using any drums, as it does house music without employing a kick. Don’t ask how, just let it groove and try to figure out why your ass wants to move despite the absence of almost all of the hallmarks of today’s “dance music”. All except for the outsize bassline which holds it all down firmly to the floor while playful electric piano chords punctuate and add blocks of color to a an idyllic soundscape animated by cascading chimes, glockenspiel, bell, synth and zither.

This is a warm, sonic bath you’ll no doubt wish lasted longer. 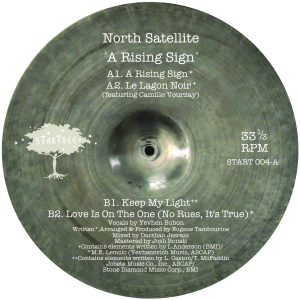 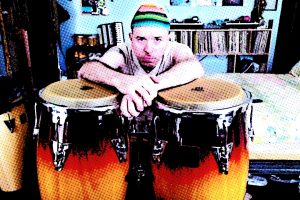 1.) Thanks so much for talking to us today! You are shortly to release your ‘Rising Sign EP’ on Darshan Jesrani’s Startree imprint. It’s a very cool label to be releasing on. Tell us how you hooked up with them?

Darshan and I met briefly while our mutual friend Danny Wang was in town several years ago. A couple years after that I was doing some recording in the building where Darshan’s studio is. For a while I would just walk by his window and wave! I think I had this premonition that we would, or should be connected somehow. Eventually he asked if I’d like to do some overdubs for a composition he was working on. I absolutely love a project and I record most of my instruments a home, so I was able to offer a full percussion arrangement that he could sort out. In exchange I asked if he’d be interested in mixing some material I was planning to release. He was up for it and that became the Lemko Unlimited Orchestra 12” which came out on Balearic last year. I think we developed a great dynamic along the way. We’ve been mixing other material of mine ever since, so putting something together for Startree was a very natural thing.

2.) You’re a new name to us. What can you tell our readers about your musical background?

I’m basically a self-taught musician with a modest, 20+ year DJ background that informs a lot of what I do. Instrumentally I play keyboards, piano and electric bass, but what I really love is percussion; bells, bead shakers, congas and stuff. That’s what I want to play in your band!

3.) You’re originally from Seattle, now based in NYC. When did you make that move? What made you move to the city?

Seattle was a really fun town for exploring music when I was growing up in the ‘80s and ‘90s. There were incredible record stores, thrift shops, affordable apartments, alternative clubs and even alternative-to-alternative clubs! I probably lived vicariously through the music that came from New York and England but again, Seattle was fun – I didn’t feel like I needed to go anywhere else. Occasionally I’d visit friends in New York and discovered the Larry Levan memorial birthday parties. These reminded me that there were bigger, rootsier events going on which were actually more aligned with my musical tastes than Seattle audiences were. By the end of the ‘90s, the “dot.com” boom and hyper-gentrification had noticeably changed the spirit of the city. I felt like my cultural landscape had dried up and I’d gotten really depressed about it. Even though NYC in 2004 was going through its own transformations, moving there was one of the best life-decisions I’ve ever made. Before that, I’d spent a chunk of my childhood traveling coast-to-coast to visit relatives, since my mom’s from a tiny college town upstate and my dad’s from Philadelphia.

4.) I hear that you were a touring musician. What did you play? Who did you play with? Can you tell us a couple of highlights from that time?

I went on several tours with an Australian singer/songwriter named Scott Matthew from 2008-2014. We met at the Metropolitan bar in Williamsburg where I deejayed for many years. I liked his voice and his approach to melody – it had the intimacy of a Lou Reed ballad among other things. I hadn’t heard a lot of local music with these qualities, especially within the queer scene. On our first musician’s date I brought a kalimba and a bass guitar and those were things that I played until his piano player left for a while. From then on I played piano and bass. His was what I’d call a ‘chamber pop’ group. Ukulele, acoustic guitars, piano, electric bass. Danny Wang once asked me how I could play such un-groovy music. I told him “It’s because I can” if that makes any sense.

A couple of highlights? Well it was an absolute thrill and a huge privilege to play the 2009 Montreux Jazz Festival as the opening act for Antony & The Johnsons. Scotty has great management and they booked him all over western Europe. To see those parts of the world via Music was really something – something I may never get to experience again on that level. There were many other shows, but another which stands out is one we did for a Corsican production company called Mezzovoce in 2011. They documented this intimate performance with the audience seated close around the band. I was scared shitless, but it turned out to be a really good gig. Scott’s sound is very melancholy and measured and requires a lot of concentration and precision to play. The conscious absence of drums was also another variable, so it was a challenge to use certain piano textures and basslines to convey an illusion of rhythm. Definitely a learning experience which I think made me a better musician.

5.) Tell us about ‘A Rising Sign EP’. What was your inspiration for the package?

It’s just an evolving set of compositions which are loose but structured, melodic and polyrhythmic. It begins with a wandering instrumental, followed by another one which introduces a speaking voice. Flip it over and we progress to some singing voices, and finally a compete song. I’d explored the “Blue Lagoon” a few years earlier on a single for Tummy Touch and I felt like I hadn’t gotten the concept out of my system yet. If anything, I wanted to improve its sonic qualities. Linguistically it just seemed to make sense to do it in French this time around. Camille’s a good friend who shares some of my musical tastes, so she was a natural fit who could translate and perform it with ease.

6.) Do you follow a particular production process when you start a new project?

As I mentioned earlier, I do all of my composing and recording at home. What I’m not as confident about is the science of sound, so mixing the music is a task that I choose to share with a specialist. Some people have asked me why I don’t just hunker down and learn studio tech stuff, but it’s a lot to just compose, arrange and play everything at this point. I also think engineering and mixing are like instrumental talents unto themselves. They require an ear and an attention to technology that I just don’t have right now.

7.) We are sharing a premiere of  ‘Love Is On The One’. What can you tell us about this track?

I’m really happy to see you’ve zeroed in on that one, because it’s really special to me. My intent was to write a ‘soul’ song in the style of Imagination – that fabulous, fey British group from the 80s – but it ended up becoming its own thing. Lyrically, the sentiments come from the fact that I’ve been with my boyfriend for 11 years and during that time I’ve been through some crazy changes and challenges. As much as I love this city, I don’t think I’ve ever really found my niche socially or professionally. I could go on, but you get the idea. Meanwhile my romantic situation is the main thing which is “so together”, on the one like the downbeat. It’s a force which keeps me going. It’s a very exceptional situation and I’m thankful for it every single day.

8.) Tell us one of your musical inspirations?

Ooh this is a tough one – there are so many. I would have to say Herbie Hancock. The man has a catalog so diverse you could probably listen to it all day and forget it’s the same artist. I love the variety of his albums, the turns he’s taken throughout his career, the blending of electronic and acoustic instruments – especially his incorporation of Bill Summers who’s one of my favorite percussionists.

I can’t say I’m up-to-the-minute about anything. I’m still discovering things that came out over the past 19 years! In general, I tend to think that if I’m hearing something for the first time, it’s New Music. Right now I’m really charmed by Jeff Morrow’s soundtrack for the Walter Mercado documentary “Mucho Mucho Amor”. It’s a series of these gorgeous, delicate little motifs, most are only about 2 minutes long. I’ve always loved a composer’s ability to present a satisfying, complete idea in a short amount of time.

10.) What’s up next for Eugene Tambourine?

Right now, Darshan and I are mixing a small motherlode of my compositions for future release. Some are new and others have been sitting around for quite a while. Other than that, I’m trying to stay healthy and looking forward to seeing how A Rising Sign will be received. I appreciate your interest, MI4L!