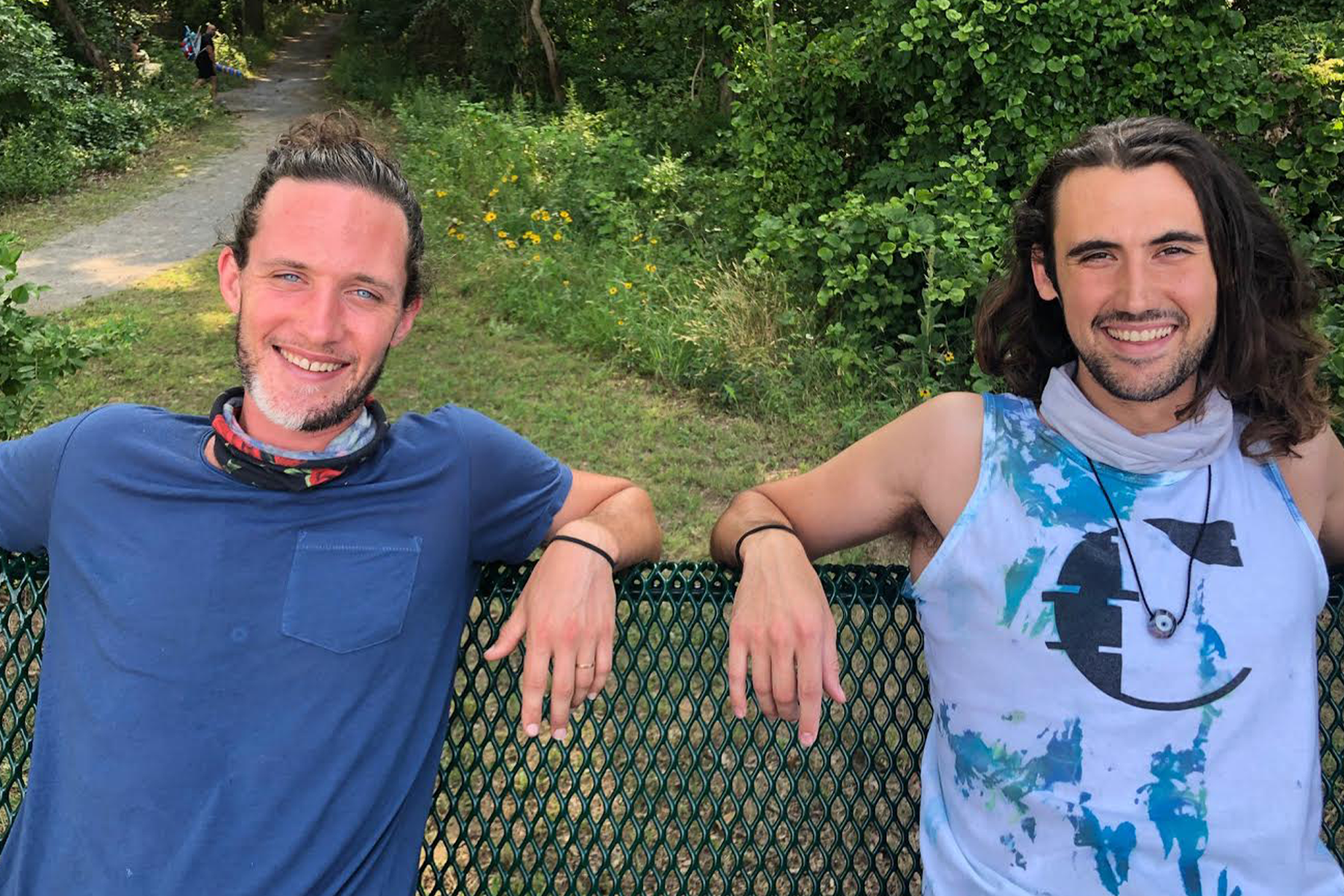 Majak & Diego Knows are a bi-coastal duo specializing in deep, dark techno and house. This Heavy Feeling EP is exactly as described, with deep booming bass over steady hypnotic marching-beat. Staybad’s own Nik Thrine provides a stellar remix to the original, as well as an instrumental edit from the group’s mentor Jay Tripwire.

The Heavy Feeling EP is out now on Staybad! 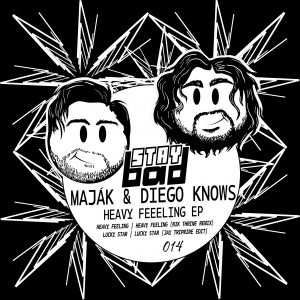 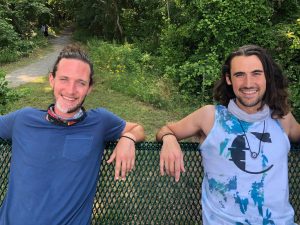 1.) Can you give us a quick background on yourselves? How did you guys meet, and what enticed you to start making music together?

We met in the 3rd grade when Mike’s family moved into the neighborhood, we lived 4 houses down from each other. The rest is history, been best friends ever since. We grew up listening to all of the same music and our tastes molded together very naturally and effortlessly. We were both in the school band growing up and always talked about making music or forming our own band. In 2009 Mike had a snowboarding accident and broke his neck, with not much else to do we started messing around with FL studios. Over the past decade we have been making music individually and together but rarely did we finish tracks properly. It was more of a creative exploration and a way for us to stay in touch as we both moved away from home. We started putting some stuff together and it just flowed, we’ve always had this kind of telepathic, yin yang type of connection and when we started putting tracks together, it showed.

2.) Being a bi-coastal duo with over 3000 miles separating you must be an interesting barrier to overcome when making music. How do you guys work to get around this?

It definitely was an interesting barrier to work through but once we got the workflow down, it was awesome! Growing up together for so long, we have non verbal communication and sometimes telepathic; we know what each other are thinking with little to no explanation. However after graduating from FL Studios we both moved on to seperate platforms using Logic and Ableton separately. We are constantly sending each other stems and parts back and forth until completion. Typically most of our drums, basslines and synths come from Ableton and most melodies, vocals, leads and other rhythm patterns from logic as well final mix down. We would send these projects back and forth multiple times before settling on something we both agreed was a finished project. Some took days, some took many months. Communication was essential, we would talk on the phone about these tracks we were working on just about every day, what vibe we were trying to achieve for each and what labels we were striving to release them on, who would be a good match to mix and master them. It got to the point back in April where we had 8-10 active projects at a time and if you heard the conversations that were going on between us from an outside perspective, you would have thought we were nuts!! We knew exactly what one another we’re talking about. A very important thing is respecting the creative flow, we never really push each other to work too much if of us isn’t feeling on, the creative flow comes and goes and can’t be forced and we both do a good job of respecting that and sometimes one of us have to just keep pushing through working even when the others head isn’t 100% on the music.

3.) Let’s talk a bit about this Heavy Feeling release. Amazing title track here, can you talk about the production process behind this?

Heavy Feeling was actually produced a pretty long time ago, 4-5 years at least. Cityfox had just finished their first season of the mirage and were expanding into what we know now as Avant Gardner. Heavy Feeling was created with the intention of being played at the mirage with more bass and groove than most of the deep tech/burner music that is played. Funny story behind this track, we sent it to a few labels and landed one of them but the label had wanted us to make a change or two before signing, We ended up not having all of the stems in the original Ableton file and we spent weeks searching the internet for these “Orgasm Sounds” just scrolling through whatever women moaning we could find. We definitely caught some weird looks and had to explain ourselves a few times, but after a while of searching and not being able to find the match, our friends at Staybad loved the track just how it was originally intended it to be and it just feels right that way, we’ve been getting tons of support, its awesome.

4.) We’ve got a pretty stellar support package to boot, with a killer remix from Nik Thrine and stripped down edit from Jay Tripwire on the B-side. How do you feel these cuts compliment the integrity of the EP?

Nik’s remix is absolutely perfect, capturing the essence of this intention and gifting us with this beautiful track that bridges the gap from our original mix into that Cityfox sound/vibe.

Lucky Star was inspired by Pedro Goya and Oshana both major influences on some of recent works. We wanted something to ‘bang our head on’ sampling the voice of an early inspirational friend Paco di Bongo. The original is what is, forward moving, erotic, fat subs, hypnotic, but the bone rattling minimalism of jays edit can be played damn near anywhere any time. Jay has been a friend and mentor for several years now and has helped guide us along the way. He has taught us that less is more, and sometimes an instrumental edit is all you need “to finish that track you’ve been working on.”

5.) Do you guys have any musical inspirations that have helped you sculpt and find your sound over the years?

Of course, all sorts from Motown to Jameriquia, Chris Leibing to Carl Craig .. we draw on funk, techno, house and a various mix of live artists. We have had so many musical inspirations over the years it’s hard to keep track, some mind blowing club experiences that stick out to us as inspiration are Danny Tenaglia, Dubfire, Chris Leibing, Carl Cox, Boris, Victor Calderone, Luciano, Cajmere, Marco Carola, Butch, Seth Troxler (b2b Ben UFO all vinyl at Output all night long really sticks out to us), John Digweed, Jus ed, Dj Que, ZIP, Lemache, Delano Smith, ion Ludwig, Riccardo Villalobos, Arjun Vigale, Art Department, Fumyia Tanaka.. sheesh the list goes on, We went way too hard for about 10 years or so but that’s the way it had to be! Growing up just outside New York City we saw these guys and many more in some really unique mind blowing locations with incredible sound systems that really brought out another musical side of them that you wouldn’t experience on a set recording or video… Gotta hold back tears type of shit..

In the end we do not follow trends, patterns of even structure when arranging tracks .. being free with our musical expression we feel has ultimately given us our own sound. Bass heavy grooves with enticing leads, trippy vocals and funky breaks.

6.) What have you been doing to keep busy during the quarantine time?

Producing a lot of music.. we completed 12 tracks and have 5 remixes from colleagues. A lot of this time was spent investing in ourselves and with the loss of work, music became our jobs. We even invested in some new gear like the cyclone tt 303.

7.) Any other cool releases dropping soon this year that we should know about?

Yes! We have a massive release with Decay Records coming out November 27th including remixes from Alexi Delano and Igor Vicente. We also have 3 tracks released with Superfreq, a label we have long looked up to. Those tracks were actually the first set we made during quarantine specifically for SF. We have another incredible EP coming out with As.if Records including remixes from David Scuba, Igor Vicente and Finley. To top it off we have another single to be released at the end of this year with King Street. Dates TBD