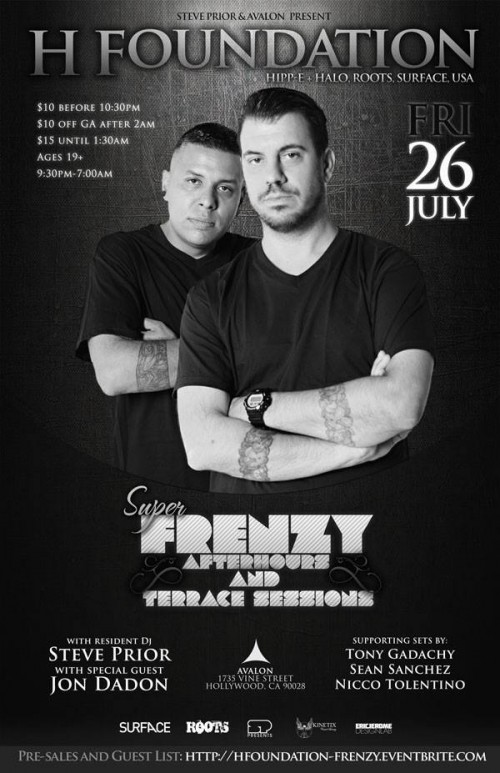 One of LA’s favorite after hours, Bardot @ Avalon Hollywood, has been hosting great parties for years.  Bringing you some great local DJ’s and in recent they have been grabbing bigger names with their new Super Frenzy parties.   A few weeks back they brought in Miami legend Oscar G(Murk), and for this weeks Super Frenzy they are bringing in H Foundation.  H Foundation is coming towards the end of their world tour where they have been rocking crowds from Ibiza, to Berlin, to Mexico, and right back to their home in Southern California.  We are super excited for this party and not to mention our very own Jon Dadon will be playing.  Resident DJ Steve Prior has been doing a wonderful job keeping this party up with all the other around and by bringing in talents such as these, you know this party will rock!

A little about H Foundation

Eric Galaviz (Denver, CO) and Brian Varga (San Diego,CA), better known as the DJ / Producer duo Hipp-E and Halo, joined forces 13 years ago after realizing they shared many common musical interests. Even their earlier days of collaboration as H-Foundation yielded some of the most influential tracks like “Here Dis Sound” and “Tonight” from their famed “Environments LP.”

H-Foundation quickly became internationally known for their unique dub-influenced sound that transcended the house genre. What followed was a list of accolades that put them at the top of the heap as both DJs and Producers. Catapulted to fame with exposure from UK Legends Pete Tong and Carl Cox, a long standing residency at Fabric (London) and work with respected labels like Moody, Siesta, NRK and Soma have kept them in high demand on the touring front and in the studio.

After years of collaboration with great success, the duo decided to shift their focus to their individual pursuits of personal life goals.

Reinvigorated, matured and inspired by the very interests that brought them together years ago, Hipp-E and Halo are once again creating sophisticated ground-breaking sounds that will influence the direction of organic house & techno in the years to come. With releases expected on Halo’s own label Surface Recordings as well as Tsuba, One Records and Left Room the bar is raised yet again.