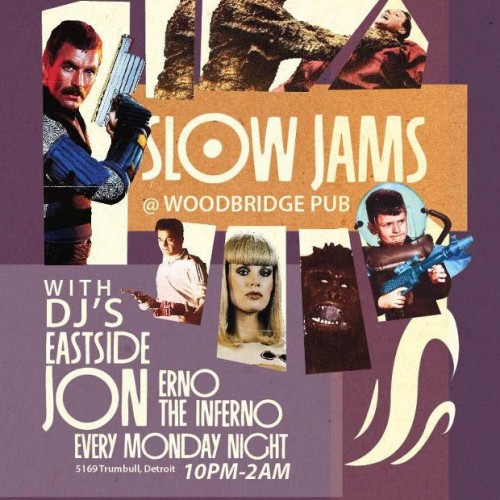 Nestled nicely between those nights that are heavy in house and top-notch techno is Slow Jams, Detroit’s weekly Monday meet-up that evokes the magic of Motown with sublimely sexy sounds. The all-vinyl affair is celebrating five years of musical magnificence next Monday, October 28th. A slew of local talent will be digging deep at the decks to take us back in time for the occasion. The night will see DJ Psycho of Detroit Techno Militia, DJ Head and DJ Dez abandon their signature styles to fill the floor with funk and soul, alongside residents Erno the Inferno and Eastside Jon. We caught up with Erno, the mastermind behind this long-standing soiree, to find out more about the night’s history. Slow Jams is a gem, so bust out your beehives and don your dancing shoes for this one, Detroit! As always, no cover.

What inspired you to start a strictly vinyl night of soulful sounds?

A group of us started the night as a chill-out night where we could play records we normally couldn’t play in a hyped up party situation. We all had a substantial amount of records that we loved but never really had an opportunity to play them out. Frank Raines, Eastside Jon, Jesse Cory, Mike Mackool, and myself started the night with the help from our friend Andrew Beer who was bartending on Monday nights. The Woodbridge Pub had just opened, and, since most of us were residents of Woodbridge, we thought it would be nice to have something in the neighborhood.

For the anniversary party next Monday you’re bringing DJ Psycho of Detroit Techno Militia, as well as DJ Head and DJ Dez. Who else has graced the decks of Slow Jams over the years?

We have had Mayer Hawthorne and Slow Hands out for our Movement wind-down party on Memorial Day. The 3 gentleman that will be joining us on the 28th have all played before and have delivered some of our favorite sets from the night’s history.

What have been a couple of the most memorable Slow Jams you’ve hosted?

When we first started the night it was super chill, but once we got into winter time we were starting to see a large amount of people coming out every Monday. I remember a couple of Slow Jams in the beginning where we had to clear every free standing table inside the pub to the side to make way for all of the people.

Also, there were actually two Slow Jams in a row where Kenny Dixon Jr. (Moodyman) came out just to kick it with a friend at the bar. He was like “Man! Ya’ll are playing vinyl? Ya’ll some bad muthafukas!” That was pretty cool.

Who are a few artists you might hear at Slow Jams that you find especially influential?

Marvin Gaye, Bobby Womack, Eddie Kendricks, The Stylistics…. There are so many artists that were around back then. Most of our music is from the 60’s, 70’s and 80’s. You often find that you will hear the same artist throughout the night, but at different points in their career.

What’s in store for the future of Slow Jams?

In my mind Slow Jams is a cultural event in our city where you have the opportunity to discover music from another generation. As long as I keep buying records, I will always feel the need to share them with others.