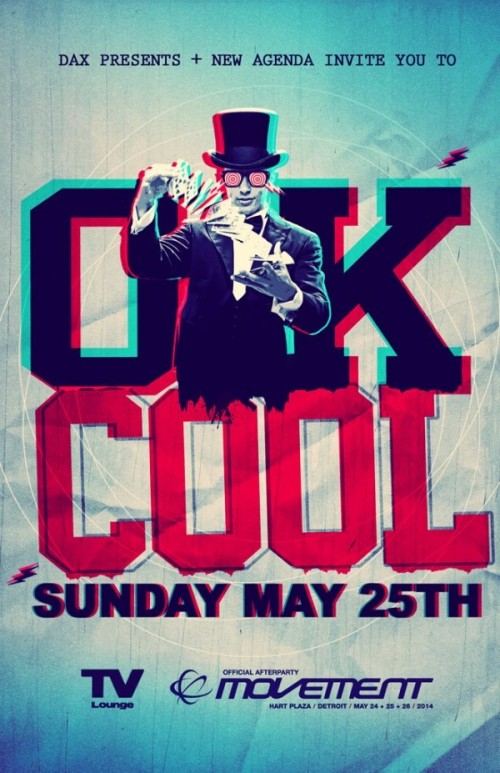 With so many festivities around the fringes of Hart Plaza in honor of Movement, it is easy to get lost in the sea of top notch events.  One party we are especially excited for is OK, Cool, a collaborative event produced by San Francisco-based Dax Lee and Detroit’s New Agenda crew (made up of Mr. Joshooa, Dan Wagner & Ataxia), who are bringing their second annual installment of an all-out, all-night spectacular to TV Lounge.

Besides bringing in such talented artists as Seth Troxler, The Martinez Brothers, J.Phlip and Thugfucker this Sunday night, both the venue and concept completely encompass the Detroit ethos we all travel from far and wide for — organizers putting their heart and soul into events, in order for fun-seekers to have an immersive musical experience free from pretension, and full of quality people and off-the-chart vibes. We got the chance to ask Dax, organizer extraordinaire, a few questions, as we all prepare for the pilgrimage into the musical mecca of Motown… <3

Hey Dax! So you are from San Francisco, it’s an amazing city with such great energy. What musical endeavors are you involved in out on the West Coast?

Hi Mi4L! I’ve been DJing, VJing and producing house and techno events in the San Francisco area for 20 years now. My next few events have me opening for Dubfire, hosting the house/techno area at the legendary Raindance campout, and then heading to Europe for a tour including Glastonbury, Garden Croatia, Ibiza and Secret Garden Party. I’ll be back in time for my annual pilgrimage to Burning Man, where I have been part of organizing and performing at large scale sound camps since 2000.

When did you start coming to Detroit?

In 2010, when my friends from Liaison Artists – then known as Blue Collar Entertainment – co-produced their first Movement after party called “I Love You But I’ve Chosen Techno” at The Works. It seemed like a good time and oh boy was it – I haven’t been able to stay away from it since! Ataxia, 1/2 of the New Agenda crew, actually played that party, but I didn’t know them at the time.

Do you have a favorite year or memory of the festival?

Every year. Magda on the Made In Detroit stage, Justin Martin and Claude Vonstroke on the Beatport Stage, Richie Hawtin & Fatboy Slim’s Main Stage productions. So many mind blowing moments and just straight silliness, like seeing Ice-T and Coco with their massive security details making their way through the crowd.

The year they set up the Made in Detroit stage so that it points out of the festival and right down the main street into downtown Detroit really opened my eyes to how supportive the city is. Nowhere else in the world would that happen.

Eddie C Reps TV Lounge with pride on the patio

How did you connect with the New Agenda crew, and when did OK, Cool begin?

A magical sunrise on the beach in Tulum with a soundtrack by Francesca Lombardo after BPM festival was where our spiritual brotherhood began. With a nudge in the right direction from Seth Troxler’s team, the decision to put on a Movement after party was made. Ted from Ataxia and New Agenda introduced me to Mr. Joshooa from TV Lounge, who had been planning on doing his own event for the first time that year as well. We decided to take a chance on one another and collaborate. It was smooth and easy from the start, like it was just meant to be, and the vibe we created together was undeniable.

Life & Death surprise into the morning

The artists are so special this year as well as the venue, we LOVE TV Lounge :] Did you have much of a concept going in, as far as the sound and vibe you want to cultivate?

Absolutely. We wanted to bring a genuine family vibe, back to the roots of what house music and club culture is all about. No VIPs, no velvet ropes, no $50 tickets, just an honest price, a smile at the door, great sound, and a pumping dance floor. Everyone on the lineup is a friend, and most of them are friends with one another. It’s just as special for all the crew and performers as it is for the attendees. We love each other, vibe on each other’s music, and inspire and challenge each other. I think that kind of excitement is contagious… add a crowd that’s been following many of us all over the world for years, as well as a bunch of new friends newly discovering us, and you’ve got a recipe for magic.

The crowd gets down in the Monday morning sun

Any acts you are particularly excited for this year as the festival comes creeping in?

If you could somehow get a good spot right in the pit of the Underground Stage for Jeff Mills, I don’t really see how you could beat that for pure energy – the wizard in such an intimate setting with the best techno crowd in the world? Ridiculous. Bonobo is right up there, too. He’s an amazing DJ with a lot of range and I’m quite keen to see what he ends up playing. I’m also looking forward to seeing some of my Detroit friends like Keith Kemp, Mr. Joshooa and Ataxia get their time to shine. And of course there’s Seth on the Main Stage!!