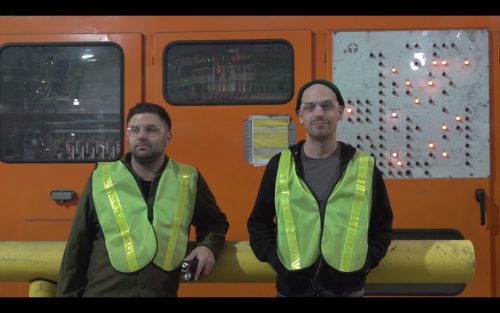 In honor of Movement, Detroit’s Electronic Music Festival, and in the midst of what Mayor Mike Duggan has officially deemed Detroit Techno Week, two local artists, Ted Krisko of Ataxia and Matt Abbott, aka Secrets, were invited to tour one of Ford’s assembly plants. There, they were surrounded by sound samples and inundated with inspiration. Both artists took the samples they picked up at the plant and incorporated them into unique tracks, deeply entrenched in the very roots of Techno.

Says Abbott, “There’s so much music in this city that came from a direct result of this [the auto industry]. So it’s a real honor to be a part of it. As industrial as all this is right here, I think there’s a lot of soul in here. A lot of blood and sweat that’s gone into people making this stuff happen.” Not unlike the city itself.

Both tracks are available to download and embedded below. Ataxia’s track incorporates the sirens in the stamping plant and drilling of Focus side panels, while Secrets’ includes the etching of serial numbers into Ford Focus engines and station chimes in the assembly line. It really doesn’t get more Techno than that!