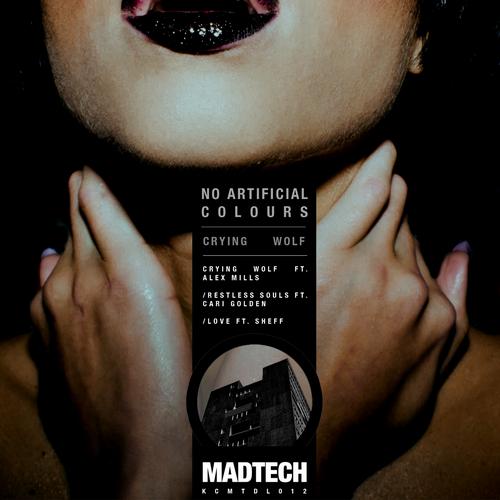 Madtech Records launched in 2012, and although only twelve releases deep, the roster boasts some of the hyped up and comers in the industry, from Citizen and Theft through to Voyeur and Krystal Klear. Here the label continues in the same ilk, with some more hyped producers, in the shape of No Artificial Colours aka, Lewis Wright and Ryan Ellis. The pair have been kicking up a storm with their forward thinking take on house as of late, with releases for Nervous, Assembly and Beef Records.

The release kicks off with title track, ‘Crying Wolf’ here, which sees No Artificial Colours team up with singer Alex Mills, whose heartfelt vocals shook up a storm the world over on Miguel Campbell’s ‘Something Special’. The cut embraces an old school house aesthetic with a bubbling organ melody, raw shuffling rhythms and subtle nuances in the groove keeping things in an ever-evolving state of play.

Following on is ‘Restless Souls’ which see the duo work with yet another reputable vocalist in the contemporary house scene, namely, Cari Golden (Crosstown Rebels / Mobilee). The record employs bumpy 909 drums, a modern tipped bass hook and heavily reverberated vocal licks as its driving force, keeping things classy and understated. Last up to close the release is ‘Love feat. Sheff’, which tightly blends an amalgamation of vocal snippets, alongside a simple yet effective Hammond bass-line and a swinging off-kilter shuffle instilled in the drum programming, again resulting a smooth, new-age house track.