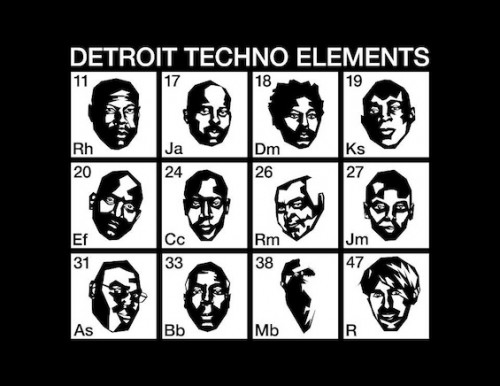 How many can you name?

Situated in the Hart of the city that gave rise to Techno, Movement maintains a certain level of responsibility to those roots, and never loses sight of the music’s foundations. Carrying the Techno torch just comes with the territory. Year after year the festival’s organizers produce a lineup that places obvious emphasis on the great minds of the past who paved the way for the future, who pushed Detroit to the forefront of the electronic frontier, and inspired generations of artists to follow. Below we’ve highlighted a handful of the trailblazers who will be gracing the stage with their groundbreaking sounds come Memorial Day Weekend. These are the INNOVATORS.

One third of the Belleville Three, the recognized Originators of Techno, Kevin Saunderson has something extra special planned for this year’s festival. The man known as “The Elevator” will be presenting a unique showcase called Origins, an absolutely apropos techno time machine that will furiously flex Movement’s massive musical muscle in an all-day soiree of his curation. The showcase will see Saunderson share the stage with “a slate of international DJ/producers who’ve been influenced by, and in turn have influenced, the creators and originators of Techno. Jamming and vibing off each other on a single stage, the assembled artists will combine their creative energy in an unprecedented showcase of the spirit, the impact and the lifeblood of techno.” Class is in session, it’s time to get schooled from the masters.

Additionally worth noting, Kevin’s son Dantiez is billed for this year’s festival, making it a full-on family affair.

A founding member of the Underground Resistance (UR) techno collective of the 90s, Mills’ standard DJ setup includes at least 3 decks (or CDJs, these days) and a Roland drum machine, and can see him go through upwards of 70 records in just an hour. He gave a rambunctiously rousing and eclectic closing set at Movement 2012 under his The Wizard alias, which he then retired indefinitely. Rocking an otherworldly and stripped-down sound heavy in acid-tinged and industrial techno, the crowd can expect nothing but quality from this world-class connoisseur.

A prolific part of the Minimal Techno movement of the 90s, and founder of influential labels M_nus and Plus 8, Richie’s name is held in high regard by electronic music enthusiasts everywhere. There are myriad monikers under which he has played over the years, the most notorious being his Plastikman project. His most recent undertaking, ENTER., enjoyed a residency in Ibiza last season, as well as events at Womb in Tokyo, Creamfields in Buenos Aires, BPM, and an upcoming date in Miami for WMC. Technically from Ontario, Canada, just north of Motown, Hawtin maintains tight ties to Detroit, having gotten his start playing and throwing now-infamous parties at the Packard Plant, City Club and the Shelter. It’s apparent with every local appearance that returning to the place that helped propel him to success is always an enjoyable occasion for this mind-bending master.

One of the most well-known and respected names of Techno’s ‘second wave,’ Carl Craig (C2) was Co-Creator and Artistic Director of the festival in its first two years (then in its original incarnation as DEMF), and served as Artistic Director again in 2010. He runs the prominent Planet E Communications imprint, which marked 20 years in 2010, and remains in incredibly high demand as a remixer, having gotten a Grammy nod for his rework of Junior Boys’ ‘Like a Child.’ He ranked 19 in Rolling Stone’s 2013 list of the 25 DJs Who Rule the World (that’s higher than Daft Punk and Deadmau5, in case you were wondering) and Fact Mag named him one of the 15 Greatest Remixers in 2012. Forever focused on the future, and certainly no stranger to this stage, Craig’s set is bound to have his hometown on its feet, if not somewhere in space.

Considered by many to be The Belleville Fourth, Eddie “Flashin” Fowlkes was there at the beginning of it all alongside Juan Atkins, Kevin Saunderson and Derrick May. His hit ‘Goodbye Kiss’ was released on Atkins’ Metroplex imprint in 1986, before he produced Tresor Records’ third-ever release, effectively leading the way for the hordes who would later find a home for their Detroit-bred sounds in Berlin. Referred to as the Godfather of Techno Soul, Fowlkes was inducted into the Detroit Legends Plaza at the Detroit Historical Museum in 2012. Although the history books haven’t always been kind to Fowlkes, his music and its obvious influence speak for itself.

Whether or not you’re making your way to Movement this May, it’s never a bad idea to brush up on your history before you get down on the dancefloor 😉