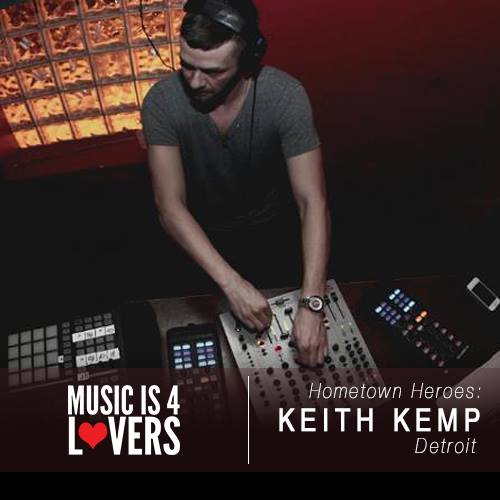 For this special edition of Hometown Heroes, we’re making our way to Motown to get to know one of the city’s most revered residents, Keith Kemp, who will be gracing the stage at Movement for the third time this May. In addition to his past performances at the festival, Keith also served as Stage Manager of the Beatport stage for seven years.

A self-described gear freak with an enviable studio set-up, Kemp has been around the block and back again since the 90s, having spent many formative years working in the dance room of one of Detroit’s most famed institutions, Record Time, alongside living legends like Rick Wilhite, Mike Huckaby, Magda and Dan Bell. A veritable part of the local scene, on any given weekend Keith is just as likely to be found behind the decks as he is getting down on the dancefloor to the sounds of his friends and his favorite DJs. He made us a terrific mix of tantalizing techno, sure to transport you to Detroit and those magical days in May.

What was it like to work at the famed (and unfortunately closed) Record Time in the 90s? I read that many local artists would personally bring their records in, and I know a number of you who were employed there over the years have since gone on to make amazing contributions of your own to the culture.

Working in the dance room at Record Time gave me proximity to great music, as well as placing me at one of the main Detroit epicenters of rave and club culture in the mid-90’s. I spent the better part of 40 hours a week, 5 to 7 days a week selling, talking, and thinking about vinyl, techno, house, hip hop and everything else under the sun. If you ever went to the dance room at Record Time, chances are I sold you records.

How has the electronic music landscape of Detroit changed since then? How would you describe what it looks like now, and where do you think it’s headed?

I’m not one to wax nostalgic, nor can I see into the future….

I understand you lived in San Francisco for a time. Were you involved in the music scene there? What brought you back to Detroit?

San Francisco is such an amazing place to live. The weather is perfect for me, the music scene is energetic and fun, and there’s so much to do there. I was fortunate enough to play some gigs around town and make some really great friends in the process. I love to go back and play there at least once a year.

After making some lifestyle changes, I found myself back in the midwest and closer to my center of power here in the city, as well as my extended family. I definitely miss living in San Francisco, however Detroit’s my home and it’s much cheaper to express myself as an artist here.

What unique challenges, as well as advantages, are there to playing for a Detroit crowd on a consistent basis?

Playing in Detroit on a regular basis is both cathartic and fun. I’ve been DJing here for 20 years! I’m pretty lucky-I’m a versatile DJ and I’m afforded many opportunities to play different types of music in Detroit, on a regular basis. That in itself is challenging and really rewarding as a DJ. Detroit audiences are very supportive, and I’m always 100% excited to play every gig I get.

Our scene has always supported both vinyl and digital DJs, and I feel very free to experiment here, so again, I’m very blessed. There’s a healthy dose of competition and shared camaraderie here as well-that’s always good. Detroit DJs are the best in the world, and we have a really great pedigree to live up to. You definitely can’t suck in this city.

Another advantage is that I get to play for different types of audiences here in Detroit, as well as different scenes. I’ve also made appearances on several different college radio stations, as well as opening for a good amount of my musical heroes. I’m proud of those accomplishments, and I look forward to new opportunities as I meet more people and travel more.

I also have a great working relationship with Audio Rescue Team here in Detroit, and that allows me to push the envelope of what I can get out of a system at certain clubs in the city. I like to play on loud, bass heavy club systems, and I can get that type of sound regularly here in Detroit, especially on one of their rigs. I wish I could take them to every gig I have.

What does it mean to you to “represent Detroit” when you go on the road?

I’m a product of my city, and my sound is derived from my experiences as a DJ as well as my surroundings. I take all that on the road with me and hit them with everything I’ve got.

What are some local Detroit labels you love that our readers may not be familiar with?

Detroit is absolutely full of great music, but you will have to seek most of it out. I can promise you, the reward is worth the effort.

You remixed Carl Craig’s track “Angel.” Did you approach it differently than you would any other project, being that it was for one of the most highly sought after remixers around?

The whole project was a bit surreal to be honest. It basically started after I had sent Carl an edit I did of his track Angel, something that myself and my friends had been playing out in our sets around town. Carl expressed an interest in that version, but I had misplaced all the original Ableton Live sessions and was only left with a 320k mp3.

Carl was adamant that he wanted to make sure the audio quality was there for a possible release, so I made an impromptu visit to his studio at Planet E headquarters and he gave me 24/48k stems of the original of a slightly different version of Angel. I knew that Carl and his engineer would do a final mixdown in his studio, so I decided to teach myself Logic to finish the remix and keep the project in the same DAW it started life in. I took the files, promptly moved to San Francisco, and then spent the next few months getting acclimated to the city while working on this project.

It was probably wishful thinking when I turned in a 10 minute version ( I was hoping for a whole side of the vinyl!), and indeed they did cut my remix down to about 6 1/2 minutes in order to fit it on the B side of the remix 12″. I wasn’t sad at all-I still have the 10 minute version, and I was extremely confident about my remix when I turned it in. I feel it got overshadowed by the Jerome Syndeham’s version on the same 12″, but in the end I was happy with the result.

You were Stage Manager of the Beatport Stage at Movement for about seven years. What’s it like to see the festival from the other side for all that time?

My position as stage manager allowed me to be close to world-traveling DJs as well as their technology, which for a gear freak like me, was really exciting. I’m a music fan first and foremost, so being able to meet DJs from all parts of the world was also huge for me.

If you were at the Beatport stage anytime from 2006 until the present, then you know what kind of party that entire stage becomes every day of the festival, every year. It’s like running the biggest and best daytime event you can possibly imagine for 3 days straight, with minimal amounts of sleep and heavy, heavy ear fatigue. Obviously I missed the music on the other stages during the weekend, but for me it was worth it.

Outside of the talent, the crowd that travels with or for most of the European artists are usually very passionate about their music, and they usually are very fun, and very attractive. Can’t complain about that. My consistent presence at the Beatport stage every year also gave me ample opportunities to make new friends and connections all over the US and the world.

I also believe the Beatport stage to have the superior sound system at the festival, so again, having the front row seat every day was quite exhilarating.

Who would you book if you could curate your own stage for a day at a festival, with an unlimited budget?

What I really would like to do is give people a visual and physical experience they will remember long after the music has finished. That could be as simple as a black room with one flickering light bulb, as long as the energy is focused on the music, dancing and having a good time. Those are the types of parties that I remember the most, but I’m not so sure where that fits in today with projection mapping, cryo cannons, spotlights and lasers.

Having played Movement twice before (a DJ set in 2002 and live in 2005, respectively), do you have any advice for artists on the bill for the first time this year?

It’s been my experience that first time artists aren’t usually accustomed to asking for certain types of DJ mixers or comfortable with telling the sound guy they would like to set up their stuff on the right side of the stage, etc. You are the artist, and your rider tells the stage manager what you need to express yourself….. After that, promote yourself! Promote your sound and your appearance at Movement-it’s a great honor to play.

In addition to Movement, you will also be playing Moogfest in April! Congrats, you must be looking forward to that. What else do you have on the horizon?

Thanks! I’m ecstatic that I am playing Moogfest, as well as representing Detroit/Movement this year in Asheville.

Outside of those 2 festivals, I’ve got a bunch of Movement pre-parties that I will be playing around the US-those will keep me busy for all of April, and all the way through May. Anytime I get to leave is great, but I also love to DJ in my hometown of Detroit a few times a month, depending on what’s going on of course.