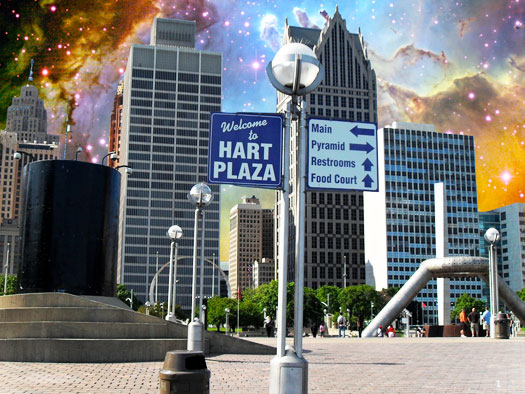 For three days every May, thousands upon thousands of electronic music’s most enthusiastic gravitate from around the globe to Detroit, where they seek asylum in the haven of Hart Plaza. It’s safe to say that, in many a mind, Movement is married to its location. The festival wouldn’t feel quite right anywhere but the riverfront venue, its landmarks and layout an integral component of the event itself. Host to myriad other annual events, including the Detroit International Jazz Festival and the African World Festival, there even exist those who believe Hart Plaza to be a bona fide portal to the cosmos, rich in symbolism and with palpable energy pulsing through it. Every Memorial Day weekend, the electrifying essence of the city, and the music’s anchor to its ancestry, make Detroit unmatched for those who submerge themselves in the deep sea of electronic sounds.

The heart of Hart Plaza, this stainless steel structure sits in its center. Built by the Japanese American artist and landscape architect Isamu Noguchi in 1981, it serves as a prime place to connect with your crew, or to sit in solitude while you watch the colorful people pass by. Noguchi is quoted as saying of his creation, which looks like a cosmic craft, “I wanted to make a fountain, a fountain which represents our times and our relationship to outerspace.” Talk about a techno-centric sci-fi fantasy.

Inspired by the double helix of DNA, this sculpture stands 120 feet-tall at the entrance to Hart Plaza. It was also  made by the Japanese American Noguchi, as a cosmic companion to Dodge fountain. He says, “It relates to the atmosphere, wind, to space flight and all aspirations we have today.”

Although erected to pay homage to Michigan’s contributions to the Labor Movement, the two steel arcs known as Transcending, meant to be “spiritual and geometric,” take on a new meaning during this time.  The plaza’s tectonics make it possible to reach transcendence through techno, sending revelers reeling through realms otherwise unobtainable.

Located near the beloved but bygone Beatport Stage (last year it was the Electric Forest Stage, this year is still TBA) when it’s time to take a breather and give your feet a break, the grassy knoll is the place to go. In addition to the fountain (and other spots you’re sure to stake out) the ‘grassy knoll’ is a good place to meet up with your mates, as well as make new ones. Wedged between the river and a [usually] more minimal/ambient stage, the breeze and beats here will wash over you, leaving you refreshed and ready to rock. Just beware security (most years distinguishable by their bright red shirts), as they prowl these parts during the day for deviants, so be discreet. 😉

Having gained popularity at parties held in Detroit’s warehouses and abandoned buildings in the 90’s, techno still feels most at home surrounded by concrete and covered in darkness. Pitted so as to shun the sun, this unique stage offers a subterraneous setting for the stylings of artists like DVS1, Nicole Moudaber and Gregor Tresher. All three had the cavern quivering last year.

With a lineup of nothing but Detroit natives for the entirety of the event, the Made in Detroit Stage is a point of pride for locals, and a frequently-cited favorite for out-of-towners. Detroit’s electronic artists have earned their esteem in the global arena, and the city deserves this opportunity to puff out its chest and show off its pedigree.

Although ‘The Pyramid Stage’ has gone through several sponsors over the last few years (from 2009-2012 it was the Red Bull Music Academy Stage, last year it became the Beatport Stage) the enjoyment of this feature remains steadfast. When facing the stage, attendees look directly onto the Detroit River and the Ontario skyline to the South. Its deep concrete steps offer people, especially those who may be shorter in stature, unobstructed views and ample room to dance.

With wide steps that descend toward the center, the amphitheater envelops listeners, who come here to enjoy the sounds of the weekend’s biggest names. Boasting amazing acoustics, everyone from Todd Terje to Carl Cox to Cassy have thrown the festival into a frenzy from this focal point.

Get your ticket now and come see what all the fuss is about.