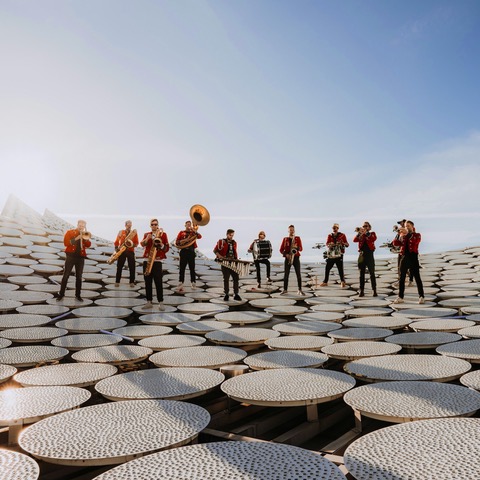 MEUTE announce the release of their third studio album «TAUMEL»

Contributing WriterNovember 18, 2022
MUSICNEW RELEASESNEWS0 Comments 0
SoundCloud     Instagram     Facebook
After their successful North America Tour and their premiere at the legendary Coachella, MEUTE is now announcing their third studio album named TAUMEL as the result of an intensive creative period. Alongside reworks of DJs such as Deadmau5, Maceo Plex, Ben Böhmer and The Blaze, the band keeps on releasing further original tracks.

What started as an experiment on the streets of Hamburg, St. Pauli, has quickly evolved into a world- acclaimed phenomenon. The Techno Marching Band combines hypnotic driving techno and expressi- ve brass band music, freeing electronic music from the DJ desk and overhauling the image of mar- ching bands. Just drums and brass, no computers involved, this is all they need to revolutionize techno music and bring it back to its roots at the same time!
The reputation of their legendary live show precedes them across the borders of Europe: The eleven musicians in their iconic red jackets induce a euphoric state of mind and unveil a world of electronic indulgence to their audiences.
“TAUMEL“ is coming out on Friday, November 18th 2022 together with the lead single „TICINO“ on the in-house label TUMULT and will be available digitally, on CD and vinyl with twelve tracks.
Artist(s): MEUTE
Title: Taumel
Record Label: TUMULT
Cat.Number: TUMULT021
Release Date: 18th November 2022
Tracklist :
1) Peace
2) Narkose
3) Infinite
4) Slow Loris
5) Places
6) Down The Wall
7) Ticino
8) Solar Detroit
9) Expance
10) Bridged By A Lightwave
11) Nostalgia Drive
12) Intentional Dweeb