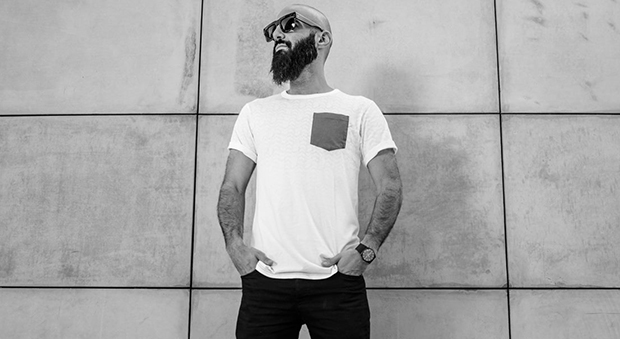 From the famed words of Mugatu, “It’s that damn Raxon! He’s so hot right now!” Fresh off his debut EP release, ‘Side Effect,’  on Noir Music, Raxon is flying high and coasting up the ranks; also releasing jams on some of MI4L’s favorite labels, such as Akbal Music, My Favorite Robot, Culprit, and Soulfooled.

As resident DJ of Dubai’s notorious 11-hour dance party, audio tonic Sunset Sessions, Raxon honed the arts of music programming, crowd control, and hosting a quality event on a weekly basis. The result has been long-lasting.

During the party’s nearly ten year residency at 360º in Dubai, a natural progression for Raxon and team was to form the audio tonic brand into a bona fide record label. That they did. audio tonic Records just added the 33rd release to their catalogue; housing tracks from artists like: Raxon, himself; Thomas Gandey; Wehbba; Kolombo; Balcazar & Sordo; Jimpster; Tom Budden; and Kruse & Nuernberg to name a handful.

Now based in Barcelona, Raxon manages audio tonic Records, hunkers down in the studio, and travels the world playing the music he loves for some of the best dance floors the global scene has to offer. Living the dream we’d say. We’re proud to add Raxon to the Lovecast roster as we inch closer and closer to Episode 100.

Here is Raxon with Lovecast 098 for all our Lovers out there. Enjoy! — jams

First off — How was Sónar? In what ways does the energy shift in Barcelona during Sónar week? What shows did you play and how did they go?
I think it was by far the best OFF Sónar I’ve experienced! The city was just vibing with positive people and we were so lucky with the weather. It was raining for a few days just before everything kicked off. I played the Moodmusic at The Coconut Club and Dskonnect Agency Showcase at Maravillas Beach Club, and they were both great! Was great networking at both, as well.

You just released ‘Side Effect’ on Noir Music, and earlier this year your track ‘Home,’ which we had on repeat for weeks here, was included in Noir’s compilation series TRX. How has it been working so closely with Noir and company? What is one way they do business better than anyone else?
Yeah ‘Side Effect’ EP has been doing well and getting support from loads of DJs, which is so humbling.

I think everyone would agree that they are one of the few labels that are super professional and always on top of things. It’s amazing that they do it with such a small team. You don’t need to chase them for anything as they will keep you updated with everything, and Noir cares so much about his artists. Always pushing them and to try to big up their profiles. I’m lucky to work with them.

Raxon & Noir at their first meeting

Tell us about your own label audio tonic. When/why did you start up the label? How do you overcome the challenges of managing a label and being a touring DJ? What forthcoming releases on audio tonic can you tell us about?
audio tonic has been a weekly 11-hour party at 360 since 2006. It starts at 4pm with chillouts and downtempo beats, taking you through the sunset with deep house, then builds up until the end of the night. It was only natural to start a record label and to have our guests be apart of it to represent our weekly 11 hour music marathon.

Of course it’s challenging managing the label, listening to demos, making my own music, and also DJing; but this is basically my life in a sentence.

Next up we have Climbers with a 2 track EP. After that one from myself and Spirit Catcher, with a huge Olivier Giacomotto remix.

How does the scene in Dubai compare to other cities in your experience?
The Dubai scene is insane! You can have the entire Sónar week in just 2 days in Dubai. I’m happy to see there are few night where they focus on local talent and the nights are successful.

Dubai — the fastest growing city in the world

What news can you share with us that you’re most excited about?
Music-wise there are a few interesting bits coming out this year, including an original on Suara. Also, you will find me playing at the UK’s High Definition Festival, Ibiza, and a few shows around Europe.

Dream collab…
Already did it… on to the next one now.

What the hottest track in your crate at the moment?
Seth Troxler – CZ