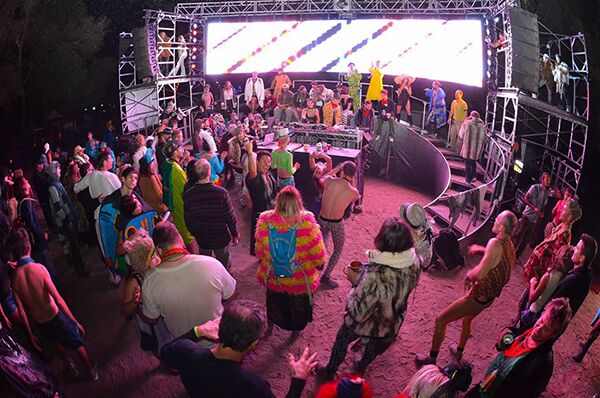 The rise in popularity of Burning Man has spawned a strong Southern California burner scene. Within that scene, some unique sound camps have emerged. Ministry of Color is a sound camp that brings to the stage elements of light and magic. Their unique style of stage design in concert with house music and techno have made them a crowd favorite at several regional burner events.

This S​aturday, June 27th,​ Ministry of Color will be bringing their massive camp setup to an all night warehouse party in San Diego. They have put together a strong lineup that will include headliner/house legend, Francois K. Other DJ’s on the bill include Dadon, Kevin Anderson, Ché, Husky Lingo, Cameron St. Denis, Astroknots and Tyler Reid.

The warehouse party will include top notch stage production, an interactive LED dance wall, custom lighting, comfortable lounges, pumping music until sunrise and a Burning Man feel that is hard to come by at any nightclub. Head over to w​ww.MinistryOfColor.us​ to receive an invitation to the party.

We had a chance to ask the founders of the Ministry of Color a few questions on how they got started, their influences and what you can expect from the MOC

So how did Ministry of Color get started?

Some friends of ours that are “burner girls” each named themselves a color of the rainbow. They described a dream camp where they’d have a massive rainbow land beside their tents, making themselves known as the “End of the Rainbow”. Some members of our group, who own a lighting company, found a way to make this rainbow concept cool for the guys, too. We found out that a regional Burning Man event in San Diego called YOUtopia was just a few months away. We immediately began making ambitious plans to build a stage complete with an LED video rainbow arching over the dance floor.

So what other “burner” events have you been a part of since your start in 2012?

Each year since 2012 we have been one of the major soundcamps at YOUtopia…that’s definitely our biggest event each year. We have also thrown a few smaller parties and pop­ups at various locations in and around San Diego; recently on the edge of a cliff in Ocean Beach.

We’ve all heard of Robot Heart, but what sets your burner sound camp apart from the rest?

Robot Heart is a favorite of everyone’s in Ministry of Color. Since we’re a stationary camp, we have the beauty of setting up big unique stage designs that give the crowd an immersive experience. Lately, we’ve been experimenting with a setup we’ve coined the “firepit”. Metaphorically the DJ represents the fire, providing the energy and vibe for participants to gather around in a 360­degree fashion atop of a curving staircase system.

What’s the weirdest situation you’ve encountered at your stage?

Well… It was Saturday night at this past year’s YOUtopia when DJ Dan played a surprise set for us at 6am. The set was a surprise, even to us, as we didn’t know he was at YOUtopia. Only a few songs into his set, the sun started to rise, giving light to a couple gettin’ freaky atop of our 14ft tall stack of subwoofers. In that same moment, a random guy walks up with a map, trying to explain how our sound has found his tent nearly a mile away and that he can’t sleep. We couldn’t help but grin uncontrollably.

Aside from sex atop of a stack of subwoofers, what can people expect from future events put on by Ministry of Color?

First and foremost they can expect a lot of “light and magic” as we like to call it. Cutting edge light and stage design, topped off with an inclusive and interactive feel to every event. We want EVERYONE at our events to feel a part of the show, not like a spectator. Our interactive stage designs, good vibes and top notch music will keep the good times coming.

For more information on the event this Saturday check out the Facebook event here.