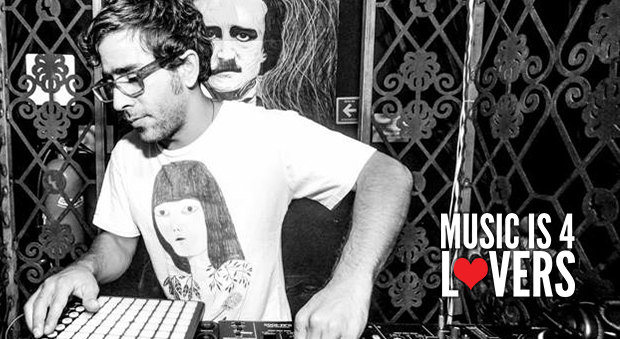 Mexican prodigio — Métrika — devotes his life to music. As a niño he marveled at how sounds fit together like pieces of a puzzle — for Métrika, the weirder and more experimental the better. The man is a mad scientist in the studio conducting his experiments daily — all the while maintaining a consistent groove. That’s a tricky thing to do.

Coming out of the Crosstown Rebels camp, Métrika’s live act is regularly a unique element at all the label’s major events; including Get Lost and Day Zero. If you’re at WMC in Miami you can catch Métrika live at Get Lost – 10th Session – March 28th. MORE INFO.

Besides Crosstown Rebels, Métrika’s original tracks can also be found on My Favorite Robot, Akbal Music, and Hot Waves. We also learned that this is Métrika first mix to ever be released — Wow! What an honor! Enjoy this week’s Lovecast — one of the most eclectic to date — and read more about Métrika’s great story in the interview below.

The quality of your productions is impressively consistent. What do you attribute this steady flow of great music to? Do you have any pre [or post] studio rituals?
I work every single day in the studio; it’s what I love the most. Being alone creating — it’s the thing that keeps me going. Morning tea is a must when I arrive to the studio; then I sit down take my time and start to think on the work of the day. I have a bunch of  rituals; one of them is to change my studio set-up once in a while so that I feel that I am working in a different place — it’s a mind game. I think it’s good to move the energy of the place you work.

Where do you find the inspiration for your experimentalism?
I think inspiration is everywhere. As a kid I really admired a Mexican producer named Jorge Reyes. He made music out of anything; that really got inside my head. I remember my family taking me to his concerts and watching him make music out of his body, punching himself all over and making these crazy sounds just with a mic, some fxs, and lots of imagination. I guess in that moment I realized that you could make music out of anything. That really opened up my inspirational path, and having that thought in my mind really marked my way of making music.

Get Lost Miami is coming up March 28th. How does it feel to be a part of the massive line-up? How did you link up with Crosstown Rebels?
I´m super exited about playing this party! It’s my first time ever; I’ve heard some amazing things about it. The line up is quiet impressive, lots of people that I admire will play there so I’m really looking forward to it.

The link with Crosstown was like 10 years ago. I met Damian in Mexico City during Mutek festival. The funny part is that we didn’t know shit about each other at that moment, but we ended up at my studio drinking and talking for hours and hours about life and music. A great friendship above all began that day. At that moment Métrika didn’t really exist; I had a couple of tracks which were complete experiments and Damian liked them so he released my first solo EP. From that day I really focused on Métrika and giving life to the experiments and all the music that I was doing on my own.  I ended my old house project and moved onto new adventures.

Where’s home base for you? What’s the scene like there? What’s your favorite restaurant in the city?
I’m living in Mexico City. The scene here is getting better and better; it’s a huge city so fortunately we have a bit of everything for everybody. Like any scene, sometimes things are complicated; we had a couple of bad years but things are shaping up. We have great festivals like Mutek that reassure the scene, new coming clubs like Mono and the old underground temples like Rioma give life to this lovely city.

Sorry but I cant put just one restaurant I love to eat so will give my top 3:
Fonda 9.99
Mi Gusto Es
Rokai

What projects do you have in the works?
I just released “Afterwards EP.”  For the first time I worked on something not for the dance floor; it’s more electronica and more for the listening side. I put together a 7 man band to play this show and I feel great with this project. Playing with human beings is just a total delight. We have a couple of gigs in festivals around México and hopefully we will play this show a lot more. There are plans to release an album later this year and touring Europe during the summer.

What’s your go-to track at the moment?
It’s hard to say one track. I´m more of an album guy. I just bought the LCD Soundsystem last concert box set and I’m really enjoying it. Sounds amazing!  I’ve been listening to it back and forth and still getting new surprises every time.

Tell us about your mix.
More than a mix it’s a selection of tracks that I really love and I tried putting them together in the best possible way. I have a couple of tracks that my own, old tracks that have inspired my productions work, and some tracks that I just simply love.