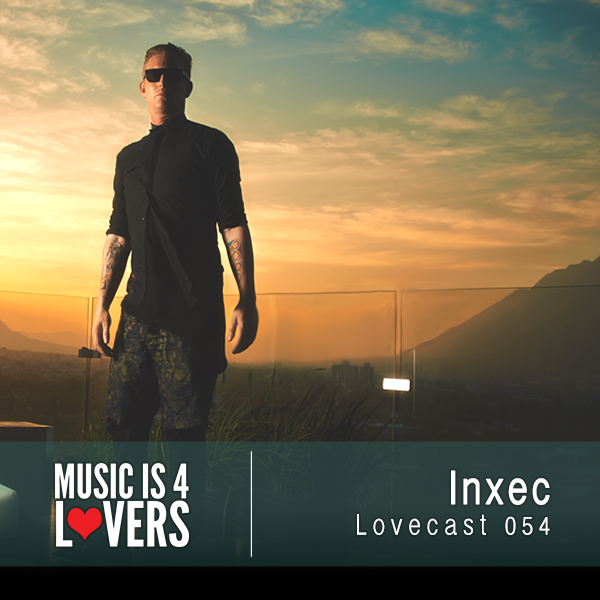 Inxec, landing fresh off a freakilicious EP release, “Ai Need You,” on Mr.C’s famed label Superfreq, is our guest for the 54th installment of our illustrious Lovecast series. We’ve been covering Inxec intently since Mi4L’s inception; he never disappoints.  His dark synthy sound feels like you’re driving down an eerie road in a David Lynch movie (in a convertible of course with the top down blastin house music). This Lovecast will surely give off the same vibe. Press play and be sure to check our interview with Inxec below.

If you’re in SoCal the week of July 23, 2014 you can catch Inxec in Los Angeles and/or San Diego

First off, where does the inspiration/ story behind your name Inxec come from?

Ricardo Villalobos was taken so I went for something that sounded just as complicated to say. But in all seriousness, there isn’t a story really, just sounds kinda cool and I like the letter X.

Where did you grow up and where do you live now?

I grew up in Nottingham England in a town called Clifton. It’s a small town and kinda inspires a lot of people to get out as soon as possible. I now live on the edge, I’m like a musical Pepsi advert doing mad shit. I reckon it would be cool to live on a plane these days and save myself the airport hassle.

How did where you grew up influence your sound?  Where there any specific local artists or club nights that were big influences when your were coming up?

My dad was my biggest influence, he had an amazing selection of progressive rock, soul, RnB and the punk. He loved all music and I think a lot of the depth of my sound is because of what I heard everyday growing up. I was also very fortunate to grow up when the Bomb was in full swing, every month we would get to enjoy tyrant when it was first formed consisting of Craig Richards, Lee Burridge, and Sasha! Some epic adventures within those basement rooms! I also got to play there a few times in the early stages of my music career.

At one point did you realize you would have a career as a music producer and DJ?

Not really sure to be honest. I had a long transposing phase between a good full time job and music. I think basically I decided I couldn’t handle both anymore and saw music as something I could progress further and felt it was a more creative avenue than being a chef.

Tell us a little about your production style. We love how dark and sometimes even sinister your sound can be. Who are your influences past and present?

I love music with a story, and I try to emulate that in my own works. So the likes of Pink Floyd, Jeff Wayne and Led Zeppelin’s epic masterpieces just blew my tiny little 10 year old mind and stuck with me in my pimple popping days and beyond. I think the dark elements are a reflection of my personality, don’t get me wrong though, I am not all doom and gloom, I just tend to angle towards a more unconventional flight path when it comes to my music.

Tell us about your work with Droog and the Culprit label. How did you get involved with these guys?

I met the Droogs a few years back after a gig. Me and Matt [Tolfrey] had just signed our first EP (Hollywood) so we went along to hang out with them. Those guys are so chilled and relaxed, cool as fuck. As time went on, my work with culprit progressed a little more so we decided to see what would happen in the studio together. First session we made Unhinged and have been making our slightly off kilter beats ever since.

What are you currently working on? Anything on the horizon you want to tell us about?

My tan. I’m super pale and think I should probably spend more time in the sun. My table manners have slipped somewhat, I’ve become prone to putting my elbows on the table whilst eating… Big no no.  Musically I have 2 EPs out now, one on Superfreq and another on Half Seas Over.  Coming up I will have a remix of a new track from Lee Brinx on Lower East out in early August as well as another EP with the Italian label Extravaganza in late August.  I am finishing up a few new originals for release towards the end of the year and just finished a remix for a certain Berlin based label (can’t really talk about that one just yet).

If someone has not heard your music before, what is one track you’ve produced that you recommend they hear?

My music varies a lot, it moves between genres, but I suppose I’d let them hear my personal favourite “Just Can’t Take It” with Matt Tolfrey.

Do you have any advice to aspiring producers?

Read up on how to use shit