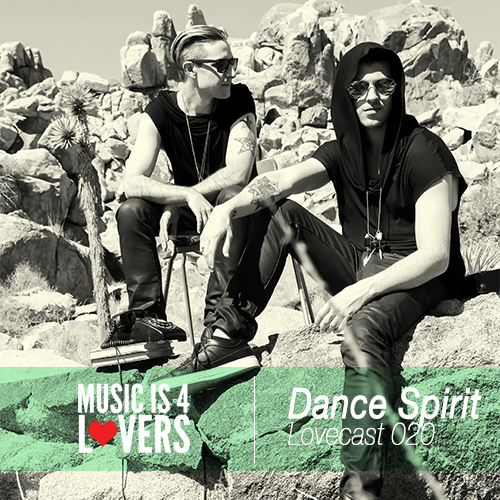 The newest Lovecast episode in our series comes from two of the most talented up-and-comers in the game, Dance Spirit. Known for their previous, more techno driven project Android Cartel, these two are consistently and constantly on the grind, making new music and pushing the boundaries of sound design. From the first time I heard them several years ago, I was astonished at the fact that they played almost two hours of exclusively their own music. I don’t think anyone knew that the music they were hearing were all originals, but I knew then that these boys were doing something special. Dance Spirit, their recently developed project, is centered more on the deeper end of things, with vocal samples, deep-house bass lines and reduced BPMs making up their compositions. With their extensive background in techno sound design and their unwavering dedication to production, they have attracted a lot of attention as of late. Their most recent accomplishment includes a new EP on the famed Supernature imprint, an accomplishment that certainly points in the direction of future successes to come. The release is called “Manifest” and features three original tracks including a fourth remix by the infamous dOP.  Lucky for us, these guys are based out of Los Angeles here on the West Coast of the States, so catching their performances, including their new live performance, is never too difficult and always a pleasure. We sat down with Dance Spirit, had a few words with them and got you all a wonderful new mix filled with original work for your enjoyment. Stay on the look-out for this duo, you’re sure to see more of them in the coming months and years.

The LA music scene has always been plentiful, eventful, and fun. Growing up on the west coast was mostly a house thing. With people championing sounds  and throwing parties like Doc Martin, The Tropical Crew, F.A.M.I.L.Y. and the Siesta crew down in San Diego, there was always a plethora of good music coming through the city, and lots of really good imports as well. Not to mention the diverse and huge rave scene that exploded in the 90’s. Crews like Insomniac, B3, Jungle Boogie, and Channel 36 were always throwing huge events and packing them full of great talent. But to be honest, it was the European guys that were always intriguing us, so its nice to hear over the years of styles being recycled and reused, but coming back in clever ways.

The love of music is the biggest influence on us today, having a readily available and crazy scene definitely helped fuel the passion, but I don’t think growing up in a certain region made us producers. Music is universal.

LA is a great city. You can still go party 7 days a week if you know the right people, the venues have changed but most of the faces are the same. Droog really does a good job of holding the city down, along with the Harmonic guys and Mr. C’s underground Superfreq parties, there is no shortage of high end music coming through constantly.

The best parties are usually the Droid Behavior ones. Crazy bumping techno all night long, and these guys do their warehouses up proper! We have a lot of respect for them…. As far as other artists in town, there are a ton. We could go on and on with all the known and unknown talent here, but LA is a burgeoning mecca.

Basically the first track we ever did together was the starting point for us. We just clicked and connected and made an “album” in 3 weeks. Even though the music was amateur, there was a chemistry that had to be pursued.

We collaborate. We believe in collaborations, because you always learn something new from someone else, or you end up making a track that you would not have made on your own. We have been working hard the past few months on an album for Supernature and have collaborated with the likes of Jon Charnis, Cari Golden, Jay Tripwire, and the very talented Nikko Gibler.  Being in the studio with someone like that is always going to be educational. The allure of being a producer is getting to work with talented musicians, and to put your take on what they perform or capture in the studio. We have also been working with trumpeters, violinists, singers, a wide range of talent for the album, and it has been nothing but fun.

It depends really, Its more about getting your music into the right hands. The market and industry is def. more of a Western Civilization thing, so that probably helps, but we are all connected by the internet so regions don’t totally matter any more. The only thing that you can come up against are labels that are nationalistic and only release “German” or “Swedish” records. And of course it seems like a lot of Americans export to Europe, and then Import themselves back here to play gigs or to live, so obviously the heart of the scene is a European thing. In LA there are a lot of big shot Europeans moving here because the music industry and entertainment industry is out here.

Be patient, devote your life to it, and never ever give up. But most importantly live it. You def. get out what you put in.

No, there is way to much music out there to ever make a bold statement like that. We love dance music, but also take heavy doses of Pink Floyd on the side.

Best thing about being on the road is going and experiencing new places, and people, and getting to share your love of music with them. Worst thing about being on the road is being at the mercy of promoters. Its either the best thing ever or the worst thing ever. Best moment on the road was probably playing in Mexico City. The crowd was great and we had a really good guide down there and he took us to the Aztec Temples which was a very exhilarating and special experience.

Well, right now we have an EP debuting on Supernature, with a dOP remix which we are ecstatic about, and as we mentioned before we are doing and LP for them as well. We also have things lined up with Audiofly’s sister label Maison D’etre which should be getting some vinyl love. Another label we will be releasing with is Mr. C’s Superfreq label. Richard has become a great friend of ours and we have been doing a lot of engineering and mastering for his label the past year or so. It is a wonderful music family to be part of. Lastly, Jay Tripwire started a great new label called Deepen Sound, we have an EP due out with them soon which features a Milton Jackson remix which is amazing. We will be out in Europe this summer to partake in the Sonar Off Parites, and would love to get some gigs out there to showcase our live act at. We just did our first run at Superfeq LA this week, and it went down proper, we really do have something special to share with music lovers.

Jameson on the rocks.

We really aimed high on this and crafted something very special to listen to. It is a mix of music that has been released over the past few years, most of it recently, but it all has a timeless feel to it. It is composed of sounds, labels, and artists that we respect and look up to. We snuck a few of our own productions through out the mix, and we used a lot of effects, top loops and sequences that we use in our live set. We also did a lot of major editing on a lot of the songs, not because we don’t like they we they are, but the advantage of creating a good studio set is the amount of control you can maintain over your sequencing.