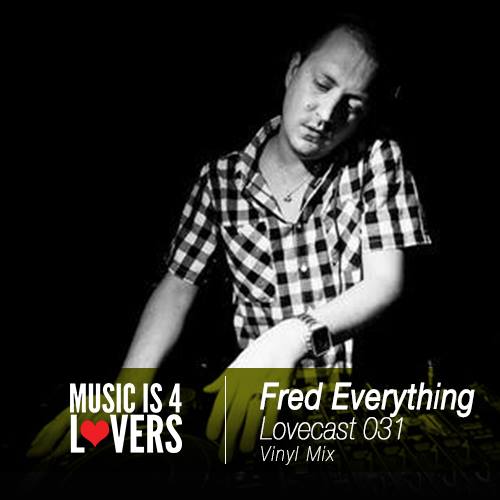 Montreal-based DJ and producer Fred Everything knows house music. His incredibly raw and classic, yet somehow updated and modern, sound stands out as a rarity in the ultra-saturated musical marketplace. Today, we chat about the new party he’s throwing in music hotspot San Francisco, Paolo Rocco (his party’s guest of honor this week), his label Lazy Days Recordings and we definitely enjoy this really fantastic all-vinyl mix he’s made exclusively for Music Is 4 Lovers. Enjoy.

1. First and foremost, tell us a bit about what you’ve been up to recently. Where has your main focus been? Studio time, running your label, touring…?

A healthy balance of all 3 actually. It’s been a good year for touring and also for the label, which takes a substantial amount of my time since I run it by myself. I also re-did my studio. I’ve always been an analog person but my equipment wasn’t set up the right way so I bought a mixing desk like I used to have and it helped my workflow a lot. I just released a new EP on Lazy Days (Street Luv/Potrero) and have a few remixes coming out soon on Moodmusic and Noir Music.

2. You threw your first Lazy Days Session in San Francisco last May with Jazzanova. What’s attractive about the San Fran vibe? How has it differed from other parties you’ve thrown in the past?

I’ve been living here for 6 years now so it was about time I did my own parties. It’s at an early stage but the first one was very successful. San Francisco is still to me one of the best scene in the US and I love the city and the people so much. A very well educated crowd. We’re also doing one at another venue on december 20th with Pezzner Live for his album tour.

3. Monarch is such a great venue, with a lot of intimacy. How has the venue itself been shaping the Lazy Days Session SF into something special?

It’s intimate but with a big club approach. The sound system (Void) is great. The basement makes the place very underground but it doesn’t feel like a dirty spot. For me it has the right balance.

4. Paolo Rocco is up for the next SF party this week. How’d you link up with him? Will he be working with Lazy Days as a producer as well anytime soon?

Paolo is also from Montreal, tho, we didn’t know each other when I lived there. He came up more recently and we’ve been introduced by a mutual friend, Christian Pronovost, who I used to work for at Inbeat Record Store in the 90s. I can’t say If Paolo will or will not release on Lazy Days yet but hopefully at some point.

5. Paolo has been described as a “DJ’s DJ,” an artist that really understands how to tell a story. What theme or story are you hoping the SF sessions will communicate to partygoers?

I don’t know really. We both have a deeper root in house music so I think we will go freestyle with our influences past, present and future. [buy tickets now, don’t miss this great party San Franciscans…]

6. Anything else coming up that you want our readers to know about about?

Apart from the releases I mentioned above, there’s 2 new Lazy Days coming out this year – An EP by Bugsy & Christian Prommer feat. Jinadu which I did remixes for and then a great Roberto Rodriguez 4 track EP in December. Oh, and this vinyl mix I just did exclusively for you!

Thanks Fred! Enjoy this über-excellent mix, lovers, and make sure to check out Fred’s party, featuring Paolo Rocco, at Monarch SF on Friday, November 29.

Tracklist for Lovecast 31 ft Fred Everything