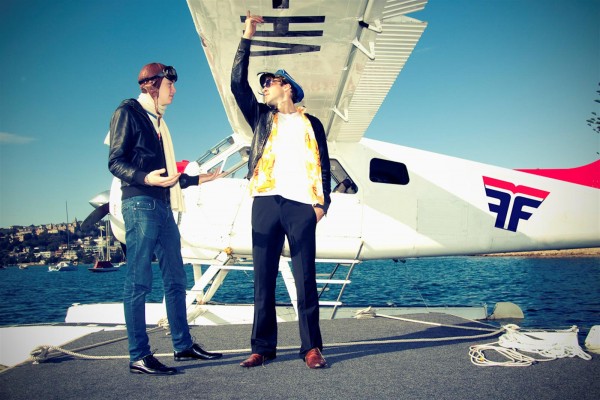 Interview with Flight Facilities – The New Album, The Tour and Reggie Watts

Flight Facilites. It’s a name you’ve come to know as synonymous with good music, excellent remixes and collaborations and more simply put, hits. It has always seemed that Flight Facilities couldn’t miss with their music, releasing top-charting single after single, and with the forthcoming release of their album, the anticipation is high for a full collection of music we will all surely and undoubtedly love.

In advance of their new album, the duo have released a music video  (below) of the first track on the album called “Two Bodies”, featuring the vocal talents of collaborator Emma Louise. The album will be available October 27th and coincide with a world tour including cities in Australia, Europe and the US. You can find out more info about the album and tour here.

Luckily, the fun doesn’t stop with this video, we’ve actually had an opportunity to speak with Flight Facilities and get their take on their tour, the new album and more.

How does if feel finally having put together a full length album for release? I am sure you guys have been thinking about it for a while now.

Surprisingly the record has only been an idea for less than 6 months. We’ve always been in the single model. We set out at the start of 2014 to create a hip hop style mixtape, including 6 tracks with all original music and a short film to match the content. It was a pretty ambitious idea to start with but as we got deeper into writing the mixtape, we found we had the tracks for a full length record. It was a crazy time throughout March and April of 2014, traipsing across America, Coachella and Europe while working on the final tracks.

A full album now also means a full live performance! Tell us about your upcoming tour. Where are you most excited to play?

We’re currently planning out the show for the new music. It follows much the same process as our previously toured shows, but now we’re faced with the prospect of a lot more of our own content, along with some special edits made specifically for the tour. We’re working with a few creatives on the visual and lighting side to, hopefully, deliver a product that will keep everyone’s attention for more than hour.

Tell us about the Two Bodies video. The camera work is great and the concept couldn’t be more literal. It’s really a nice intro/teaser to the album. What made you choose this track as the introduction to Down to Earth?

Two Bodies, lyrically, is a personal story from Emma Louise. That’s more or less what inspired a more literal direction in the clip. We wanted to make the video relative to the intended narrative. It’s a positive message and a something we didn’t want confuse with a different direction in a video. Choreography is something we’ve always stayed away from, but this time it felt right. Two Bodies was actually the first track we recorded for the project, and sequentially it’s the first track on the record. It just felt right to lead with this and to show a slight deviation in our direction while staying true to some of our older work.

You have some great cameo/collaborations on your album including Reggie Watts. I first saw him doing music in a collab with LCD Soundsystem during their final show and I thought it must be nuts to work with that guy. He’s super talented and wild as hell! How was working with Reggie? Will he be performing with you guys during your tour?

We saw the same performance with LCD Soundsystem and it was sort of a catalyst for reaching out to him. He is one of the most talented and humble people we’ve ever worked with. He’s so well known for his comedy, but his musical ability is just as good, if not better. The recording came about after we sent him a demo and he agreed to get in the studio with us. Jimmy was in the Ground control studio in New York with Reggie, and I (Hugo) was on skype at 5am from Sydney during the process. We’ve only just finished shooting the video with Reggie in Venice, which should be out in the next month or so. He went above and beyond for the final product, getting involved in all facets of the release. We can only hope the success of the song is justified in his hard work.

Tell us about your other collaborations on the album?

We worked: 18yo Bishop Nehru. It was basically our take on the 90s hip hop era. Something we’ve always been huge fans of. We wanted to show the diversity in our tastes and production and a full length album is the best way to go about that.

Our most talented touring vocalist Owl Eyes with a track we co-wrote with Julian Hamilton of The Presets. It’s on the housier side of things and almost creates the full spectrum between itself and Bishop’s feature.

Katie Noonan who has performed at some of biggest events around the world, and has been an Australian musical icon.

Amsterdam based Irishman, Stee Downs, who embraces our soft spot for the 80s and synthesised bells.

And of course, our studio friend and neighbour, Dennis Dowlut AKA Deautch Duke, who has been responsible for acts like Electric Empire and Disco Montego. He’s been an influence to us since before we’d even met and it was great to have him involved to the degree he was.

Did you have any particular influences involved in the naming and the creation of the album?

Down to Earth has a few meanings and it just seemed to fit. First and foremost, it stamps the obvious aeronautical connection we’ve always had. It’d be a shame to pass up the opportunity for a heavy-handed flight pun. But it also relates to the people we’ve worked with and the way we try to conduct ourselves. Every collaborator on the album was a pleasure to work with, and in an industry that has coined the term “diva”, it’s nice to know we’re in like-minded company. It’s a tip of the hat to our humble bedroom-producing beginnings. If the title ever turns out to be ironic, we expect to be reminded.

Do you each have a favorite track on the album?

Like any album, it’s hard to pick a favourite. Different tracks become relevant at different times. Something we may have loved last month can be eclipsed by another track because of context, or something as simple as how everyone reacts to it. I’ve changed my mind 4 or 5 times since we started making Down To Earth.

We’re really looking forward to touring a show that encapsulates our journey so far over this 4 year period. The times between shows with the crew are really special too. It’s the intricacies of tours that are best remembered and that can be the difference between a good and a bad tour. The least fun part is all the flying and the early lobby calls. It’s enough to send anyone insane, but it comes with the territory of having a pretty fun job.