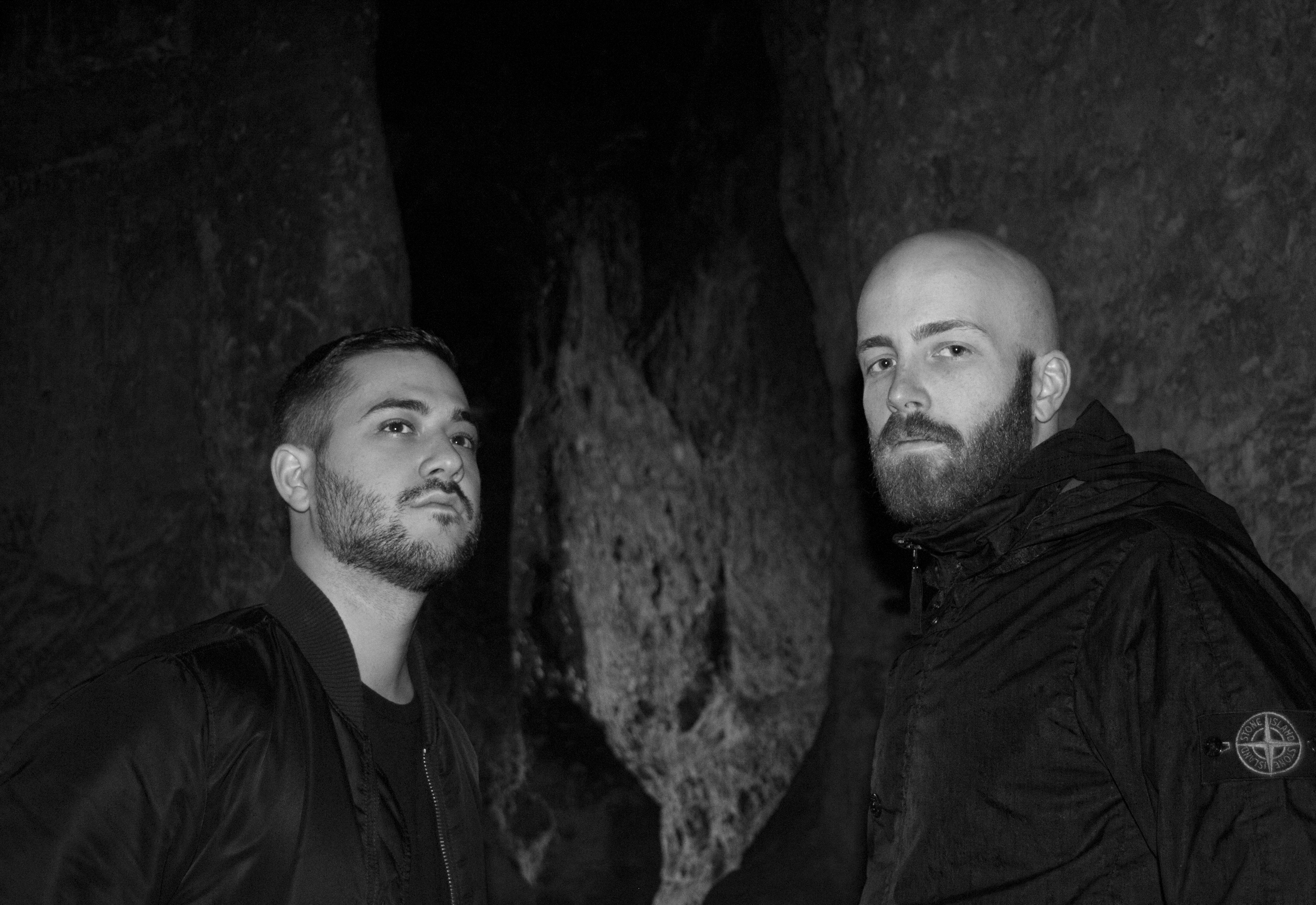 Since forming in 2014 the Netherlandic pair garnered early support from Adam Beyer, Amelie Lens and Charlotte de Witte while also playing alongside the likes of Claydrum, Slam, Nicole Moudaber in amongst their local scene and further afield.

We wanted to catch up with the pair to find out more about their collaboration, releases and running a label. 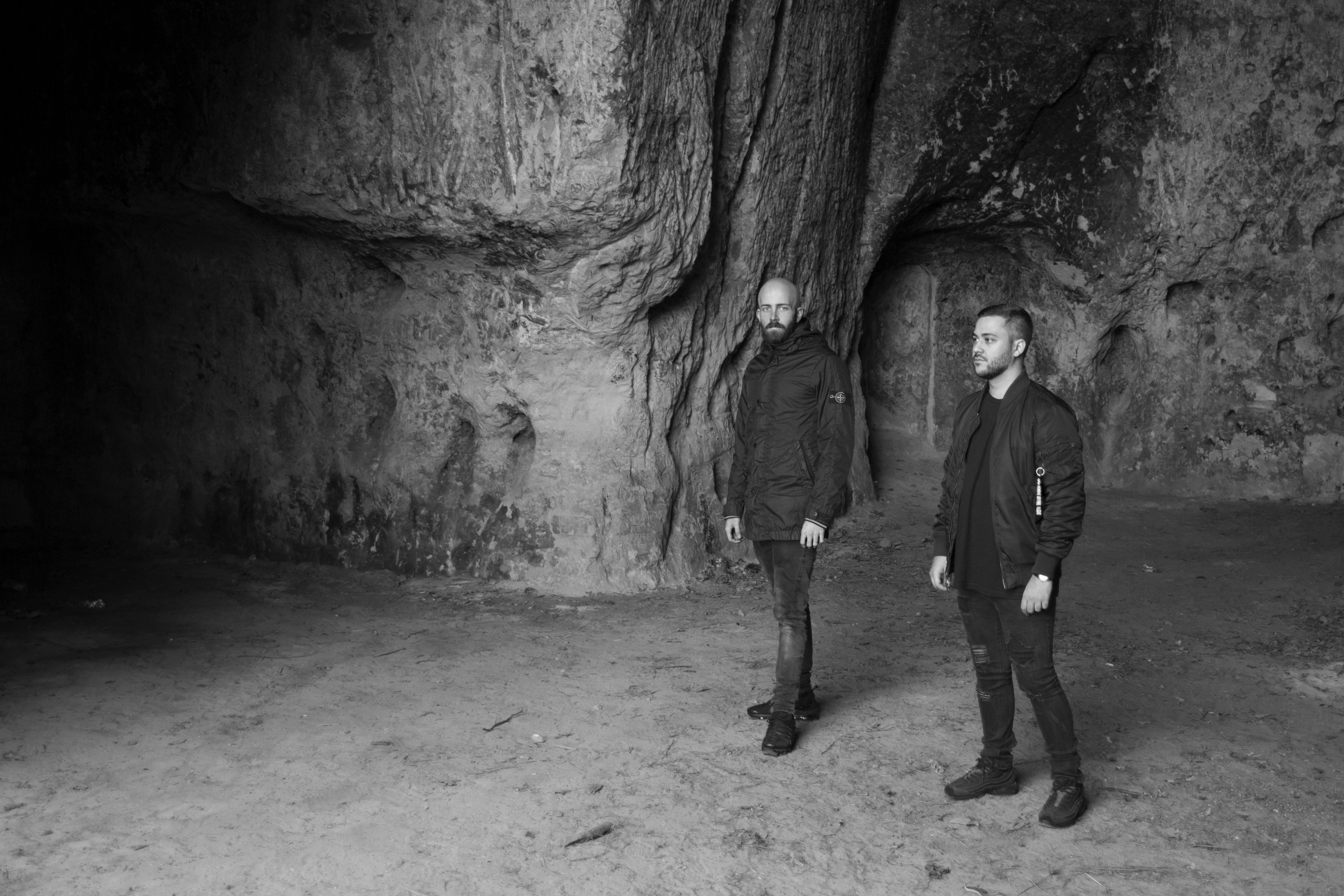 Hi Hush & Sleep, thanks for joining us. Can we start by asking what it’s like to run your own imprint – Ellora. Can you tell us what it’s like to be label bosses and what a day in the life of this role entails?

Hey guys, first of all nice to meet you and thanks for this interview! We created Ellora as a platform for upcoming artists to express their music, and for ourselves to always have a place to release our music on.

It’s hard these days to get recognized and signed by the large imprints. There are so many new talents that have to get their tracks heard by the bigger names. It’s amazing to see that a lot of producers are thinking the same, and starting their own imprint these days.

When we started Ellora we didn’t have a clue what impact it would have on our career. We put up a demo submission mail and within a few weeks our mailbox was full.

We signed some amazing new names and made a lot of new friends through the label. We’re always busy brainstorming together how to make the label bigger, create insane artwork, merchandise, getting new names on the label that inspire us and so on.

Since launching in 2016, Ellora has seen releases from yourselves and other artists including Mallone, Fables and Joyhauser. Are there any other artists that caught your attention last year that you would like to feature in the future?

Last year we had some amazing new artists releasing on our label. Italian producer Valentinø delivered an incredible EP to our label, which has been played at Tomorrowland and Awakenings Festival. We also had Marco Effe on the label and of course, we can’t forget Joyhauser’s debut release on our first VA that skyrocket the charts.

So it must be clear that we already had some promising names releasing on our label. For 2020 we want to change a few things. We already planned some future releases from ‘’still’’ unknown new artists. We’re also working on a lot of new material from ourselves to release on Ellora. 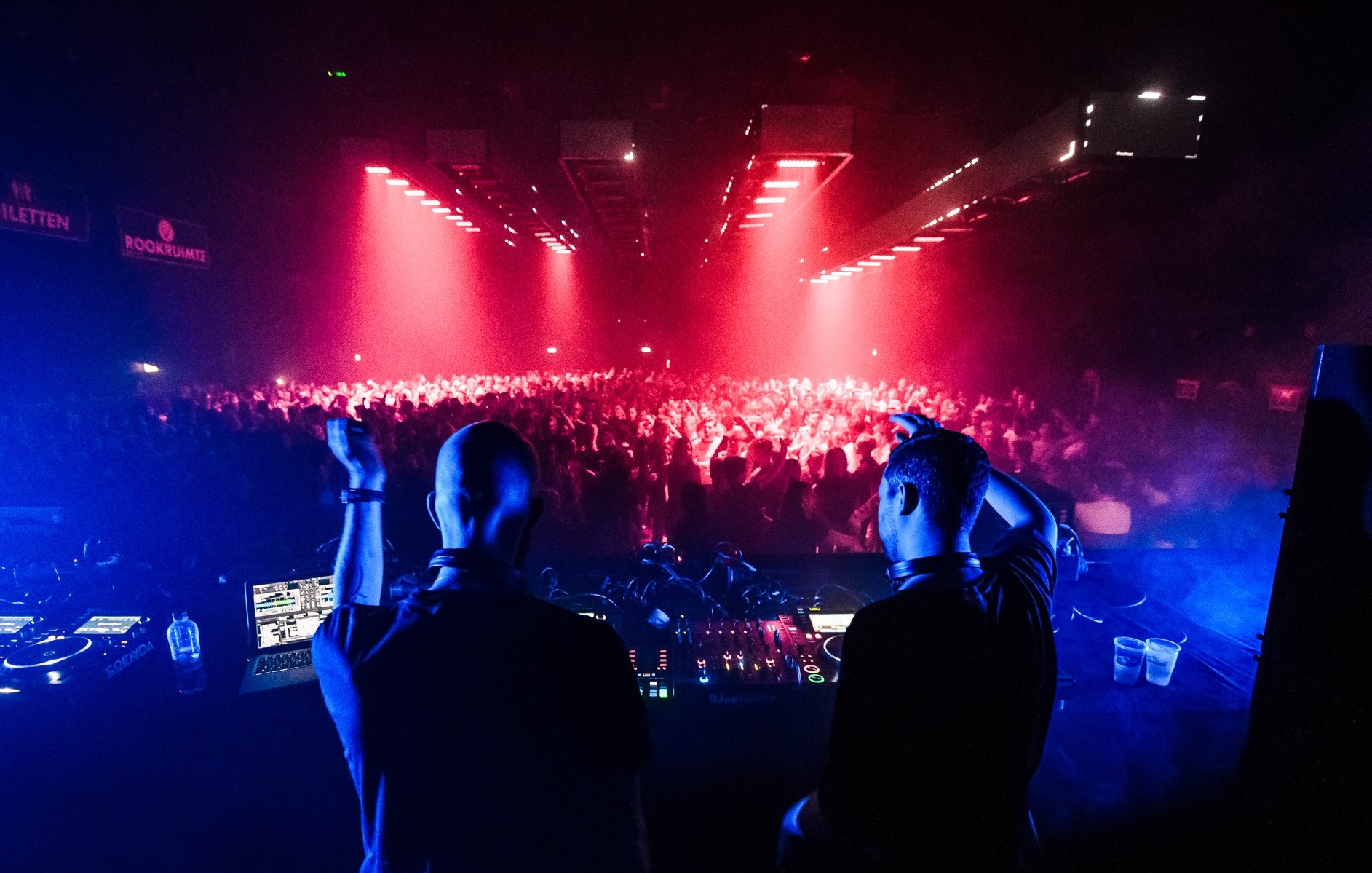 We are aware that Hush & Sleep was formed on the basis of a ‘shared vision that music should tell a story and take you to a different place emotionally’, can you tell us about the backstory behind your collaboration?

Haha sure! We met through a mutual friend who was a producer/DJ back in the days. With him we went to a lot of parties together and became friends. We already had a musical background as Tom was playing guitar in bands and Frankie playing drums. So naturally we talked a lot about music and were exploring djing/producing at that stage.

At NYE 2015 we had a few drinks and decided, why not start a Techno act together?  We played around with different styles from Deep House to Psychedelic and eventually created our own sound that’s now being produced as Hush & Sleep.

Your latest release ‘Angeli E Demoni’ on Joseph Capriati’s Redimension imprint shows four excellent aspects to your emotive techno sound. Can you tell us about the processes and inspiration behind each individual track?

The name says it all, Angels and Demons. Everyone in this world has to face their demons and also has to be grateful for life with all its complications. So to tell you about our inspiration about each track it’s simple: Life! Like our bio says we’d like to tell a story with our music and take you on an emotional ride.

To give you a little insight in the creation of this EP we’d like to take you back to the beginning of the festival season last year. Once a year before the festival season we lock ourselves into the studio for a whole week, completely offline with the outer world. In this week we set ourselves goals to work towards.

In this particular weekend, one of those goals was a release on Redimension.  We imagined ourselves amongst the audience on a big festival during Joseph’s set and with this mindset we created the four tracks on this EP. It’s hard to say what exact inspiration there is behind every track since we start producing just by going with our feelings. We wanted them to sound strong, forward marching, emotional and delicate in some places. Adding long breaks full of suspense to keep the crowd on their toes, and releasing them in a satisfying drop.

To add to our theme of Angels and Demons, good and bad, we gave all the tracks names of, you guessed it, angels and demons! And that’s how this EP came together. It’s more than an honour to have this EP released on Joseph’s label which from the very first start of our musical career is one of our biggest inspirations.

Over the past few years, you’ve released on many labels including Luca Agnelli’s Etruria Beat, Illario Alicante’s Virgo, and have been supported by the likes of Richie Hawtin, Adam Beyer and Charlotte de Witte. Can you both individually give us one of your biggest ‘star’ moments so far?

Haha, that’s a tough one! Our biggest ‘’star’’ moment, hmm.. There are multiple, but two that really touched us. When there was a bit of a dip in our career and nothing seemed to work, we released an EP on our own label named ‘’Soar’’.

The tracks were rejected by every label we sent them to. It was hard for us, but we couldn’t imagine these not doing good for a big audience so we decided to release them on our own imprint and invest in good promo for the EP.

A few weeks later we got an insane video from our Joyhauser friends that Adam Beyer was closing Extrema Outdoor Festival in Belgium with the title track Soar. That moment was magical and very emotional for us, as we believed deep in our hearts that these tracks would do good. We always had faith!

Days later, another video popped up of Capriati playing the same track at the amazing Kappa Futur Festival in Torino. We couldn’t believe it but the recognition for this EP, with all the rejections in the past, was our biggest ‘’star’’ moment so far.

Another one was when our manager told us we got a spot on the line up of Awakenings Eindhoven, the first of February 2020. It’s the event every Techno artist dreams of playing at! So this is one of our biggest dreams coming true and another ‘’star’’ moment to mention.

What’s the music scene like in your hometown of Maastricht, Netherlands? Can you give us a couple of your favourite venues within the region to recommend to us?

The scene in Maastricht is getting bigger and bigger which is amazing. A few years ago there wasn’t a real Techno club in Maastricht and only illegal raves would be happening on the weekends. It was hard for us youngsters to find a fitting place to express our love for Techno. Years later Complex Maastricht was born.

A big club in the centre of Maastricht which is hosting Techno party’s under the organization name ‘’Claydrum’’ All the big artist in the scene like Nina Kraviz, Charlotte de Witte, Amelie Lens, Jeff Mills and so on have played here.

Now we have the privilege to have our own ‘’invites’’ series at this club and became residents. Our first event with Sam Paganini was a true success and for the next one, we invited Chris Liebing and Amotik to join the decks with us!

Can you give us six records (three each) that have particularly influenced you both as artists and tell us a little about each and its impact?

For me it all started with Paul Kalkbrenner, going to afterparties there was always one track that I needed to hear ending a beautiful evening: Dockyard, it’s such a melodic trippy track that always gets me in the right mood!

The second track must be Dr Lektroluv – Discotheque.

Before moving into the Techno scene I was a big fan of Electro music. I went to Electro party’s every weekend and DJ’s like Boys Noize, Dr Lektroluv, Erol Alkan, Brodinski, Etienne de Crecy and Vitalic were big inspirations.

Discotheque had a huge impact on me when I first heard it. It’s a track that got me into Electronic music, that I’ll never forget.

Last but not least: Tale of Us & Mind Against – Astral.

This track really got me into Techno music, Tom and I were blown away by the productions being released on the Life and Death label. Tale of Us and Mind Against were one of our biggest inspirations when we started producing Techno.

This track is still one of my fav. productions. It got us in the right direction and from there on we shaped our act what is now Hush & Sleep.

For me, the track that really got me into the emotional side of techno is Ben Klock – October.

This track was so far ahead of its time with that emotional pad in the back in combination with a solid straight percussion. You can still play it these days and it sounds as fresh as then.

The second track that influenced me a lot is Keith Carnal – Untold.

That style of melody is still what I love most in techno and I try to incorporate that into our productions with our own twist. Also, the sub-bass in this track is so good that I’ve been chasing that sound for years.

As for the last track, I would like to mention a masterpiece that has been fueling my inspiration a lot ever since it was released, Alignment – Infinity.

This track is a pure rave for me and every time I hear it played or play it somewhere it’s just madness. Capturing the energy in a track the way it’s done in this one is one of my goals for 2020.

Have you got any major plans as label owners and artists for the start of 2020 that you’d like to mention?

Yes! 2020 is already starting big for us. As you guys know we’ll be releasing a 4 track EP on Joseph Capriati’s label.

It’s a dream coming true for us and we can’t explain how grateful we are for this opportunity. There will be a lot of releases coming up from us both vinyl and digital, we’ll promise they will be big.

Gig wise we’re playing at Awakenings which is going to be our biggest gig so far! As label owners we’re going to release a lot of own productions but also bringing new names to the label.

We’ll also started creating our own merchandise which will be released soon. So a lot of big things coming up this year!

Hush & Sleep ‘Angeli E Demoni EP’ is out on Redimension now and can be streamed/downloaded here https://lnk.to/REDIMENSION009 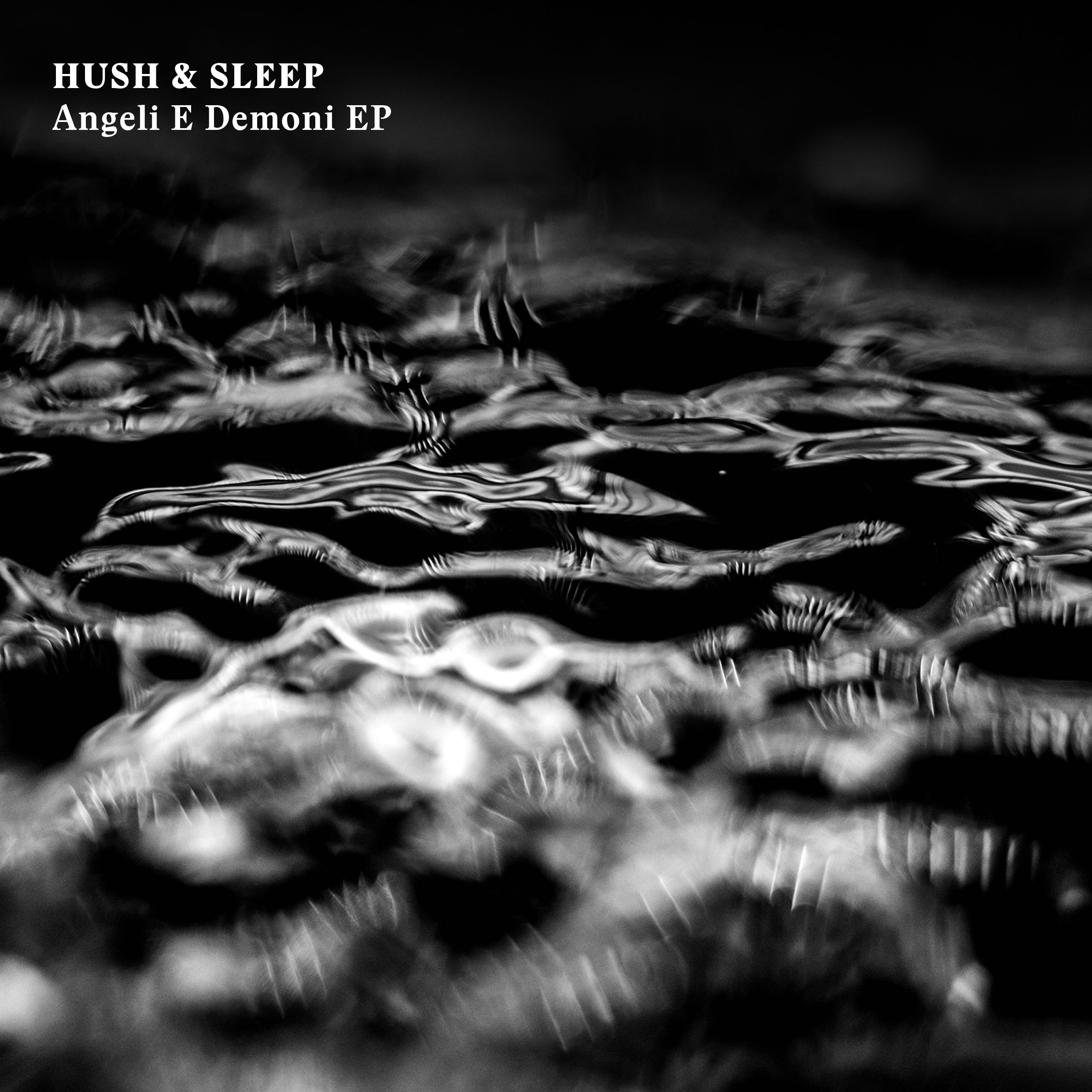