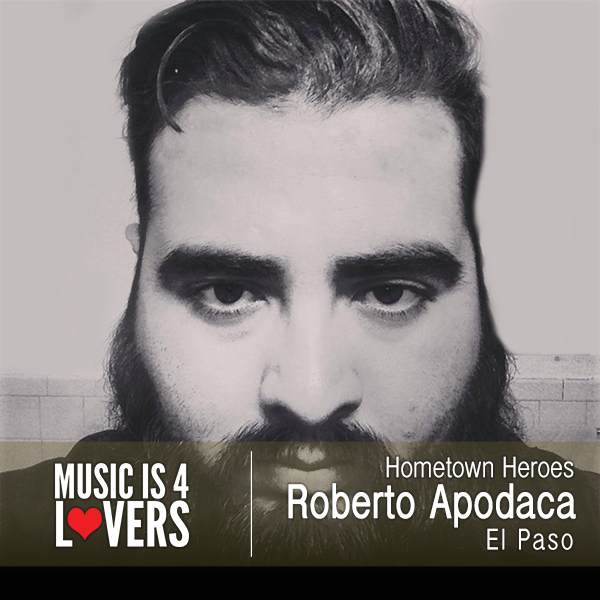 This week’s Hometown Hero hails from the Lone Star state, Texas. Born and raised in El Paso, Roberto Apodaca‘s love for music started at an early age. DJ since 18 years old, Roberto leapt to a level beyond just playing music at the club or house party; he started Draft, a record label created solely to help raise visibility for El Paso’s up and coming music producers. Now four years deep, Draft has not only provided a platform for El Paso talent, it’s also injected fuel into Roberto’s own musical gas tank. Having produced a dozen tracks for the imprint himself, he’s landed many cool gigs opening for Matthias Tanzmann, tINI, Bill Patrick, Davide Squillace, J.Phlip, MANIK, DJ W!ld, Anthea, Hector, Audiofly, and Green Velvet. He also recently came off a nice east coast tour including Sankeys and TBA in NYC. This dude is definitely making moves; enough to catch our attention and ask Roberto to be the latest edition in our Hometown Heroes series. The mix is FIRE, fareal!

How and when did you get into house music?

First I would like to say it is an honor to do a podcast and Q&A for Music is 4 Lovers.

I would say around the age of 18, when I had started going to house parties. There would be DJs there playing all sorts of music. I thought, “Hey, that looks interesting and fun.” So I would constantly listen to the radio and kept my ear open to see what the artists’ name were and the names of all the tracks. I got hooked real quick! I started going to my friend’s house, who was one of those house party DJs, to practice and give it a shot!

We’ve heard El Paso has the best scene in Texas for house music. True or false?

VERY TRUE! Not just house music, but both house and EDM. Shout out to the promoters who have been bringing EDM and UDM to El Paso since as long as I can remember: SMG, Listen:React, Ware, Synthtek, Beats Non Stop, and Late Night Social Club. This group I just listed are the reason why El Paso is not just the best city for electronic music in Texas, but the whole southwest of the United States. It continues to this day. SMG is behind El Paso’s new annual Sun City Music Festival. People from all over the southwest travel to El Paso for two amazing nights. This year’s line-up is the best to date! The festival caters to people who like all different kinds of electronic-based music.

We feel very fortunate being so close to México here in San Diego. Are the feelings mutual in El Paso? How often do you play in Juárez?

Yes, Juárez, México has been really influential on El Paso’s scene; Pastilla Digital and Hardpop were the ones that started it all in Juárez. Hardpop was once in the top 25 best clubs in the world, and is the only club to survive Juárez’s downfall from 2008-2011. It’s also fortunate Hardpop has brought a lot of artists that have yet to play in El Paso. Anyone wanting to go to Juárez it’s just a hop, skip, and a jump away. I have have yet to play in Juárez.

Tell us about your label Draft. How did that come about? What exciting news can you share with us?

I started to DJ a lot in El Paso circa 2010. One day I was browsing through Beatport searching catalogs of the labels I liked. At that time I was dying to produce my first track to put up on Beatport. Then it hit me, “What if I came up with a label who can help artists like myself release their productions on Beatport for the world to hear?” So that’s what I did. I tirelessly researched on how to create a label and get it up on Beatport. My friend Djafar from Germany knew how to do it and he wanted to help out. First he suggested we release free music so we can see how people felt about the music we were releasing. I said ok and I came up with the name and logo; while Djafar took care of the internet and marketing part. It went really well at first, but as time went on Djafar had to devote more time to his family. In 2011, I decided to really push the label and get it on Beatport. That’s when I stumbled upon Pressology. I’ve been enjoying the roller coaster ride ever since. What news would I like to share? I’m working on two tracks with Bollen & Fichtner with Forrest on remix duty for one of the tracks. Release date is still TBA.

Tell us about your recent trip to NYC and your gigs at TBA and Sankeys.

I actually just got back four hours ago from Orlando. I played at Soundbar there and had a blast! The vibe was really good! NYC was phenomenal as well! I got to meet some amazing people. Playing at Sankeys was a dream come true! In another interview I did for Guerrilla agency, one of the questions was “Dream club to play at,” I answered Sankeys NYC. That club was unbelievable! I couldn’t believe I was in NYC for the first time playing at Sankeys. TBA was also great! Small venue with big sound and very little lighting. Intimate place. I also played at Grand in Stamford, CT. Despite having to climb a ladder to get into the DJ booth, it is a awesome club! Also small with nice lighting. I never thought I would get a chance to play in CT and NYC. I will never forget this past week.

If you could give one piece advice to inspire someone wanting to break into the industry, what would it be?

Don’t give up! Its going to be a very bumpy road but if you have the will to want it bad enough then you will achieve and earn every little bit. There have been times when I wanted to stop, drop everything and try do something else; but I couldn’t stop, I enjoy it too much. If you want to make it in this industry you are going to have to push yourself to get to where you want to be, which means sacrificing a lot: friends, gf/bf, parties, not exactly all of it but enough to make it work.