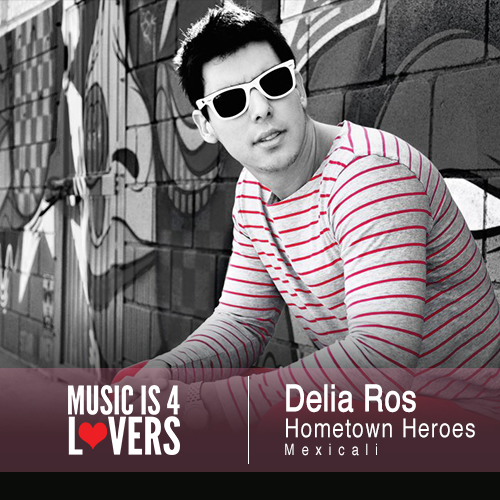 Mexicali born and bred Delia Ros has been impressing with his production abilities both in the studio and on the dancefloor, helping with the evolution of his hometown into a sought after party  destination for global underground seekers.  He has definitely been on our radar since his first release on Akbal Music in 2012, and we were so pleased to chat with him about this thriving city and host a beautiful mix, illustrated with love from Mexicali <3

1.Where are you from, and what led you to Mexicali? If you are from Mexicali, take this as an opportunity to talk about your musical history/upbringing

I first want to thank your for the opportunity to talk about our town and projects.

I was born and raised in Mexicali, still a small city but with big ambitions. I started this whole process back in 2006, attended an event in Rosarito, got into my mind and I quickly started making my own events. In 2009, I joined Icon Collective, a small music production school based in LA -which has a very good program by the way- and started with the whole production process. In 2012, Akbal Music released Draw Me a Smile EP, with great remixes by Miguel Puente and Metrika and this drew a little bit of attention and led me to play in the best clubs in Mexico City and to join Disclosure Crew, Nobody Know´s label. Late in 2012 MEXA Records released my remix for Matt Fear´s ¨Shuffle¨ and got me on the road again, this time dropping a few degrees down south to Ecuador and beginning 2013 playing at the BPM Festival. It´s been a good ride, learned a lot in the process, and have gained new friends on the way.

2.When do you start throwing parties and what kind of spaces do you like to work with?

Since 2007 until today I´ve organized events as Nocha Music, One Night (first two Liquid Summers), collaborate on some others with Normal Music and now as my own True Story. Always liked throwing parties outside, no matter if it´s the beach, forest, ranch or any outside space that givse us that freedom feeling to enjoy the moment.

3. How is the local music scene in Mexicali? Who are some of the most promising artist right now and what styles are the most prominent?

The scene in Mexicali is growing very fast, it´s been over 10 years since the electronic music started making its impact. We have Louie Fresco and Climbers that need no introduction, plus The Cool Cats are coming in hot this year, big ups for them. We also have Alex Rubio coming out with hot new tunes, Miguel Wong aka Los Rombos is making some dope tracks and I see this guy making a good live act in the future. We have The Moon which is my alternate project on work mode, and of course Mexicali´s own Luiza, who is one to keep an eye on, a great DJ with support of everybody in town. In the live acts we have FAX, his last EP ¨The Motion¨ gave people a lot to talk about, and in his same crew Trillones live act is looking very promising.

4. What are some of your favorite spots in town to hang out?

Recently Midnight music opened Groove Bar, which is looking pretty good, your own Jimbo James will be the judge next month. There´s also this place The Coffee Bar, that´s been my study place this semester. Other than that, I like to get out of town on weekends if i do, but lately it´s been a lot of working on the weekends.

5. Do you have any special events coming up this spring and summer that you are particularly excited for?

I don´t have plans for playing this summer yet, but there are some events to look forward to. We have Liquid Summer on July 19th in Rosarito, then there´s Audionik presenting Martin Buttrich on August 16 in Ensenada, definitely parties you don´t want to miss!

6. Tell us a bit about this mix! What kind of styles inspired you during the process?

It was a lot of fun, had the opportunity to mix different styles, search for new music and bring up some old ones, it took some time to pick them up. My new project is Minimal Techno, I guess I was influenced in a big way by that, and Scissor & Thread sounds have taken a big influence in my mixing too. I am a fan of story telling with music, so it has a touch of cinematography in there. Hope you guys like it.