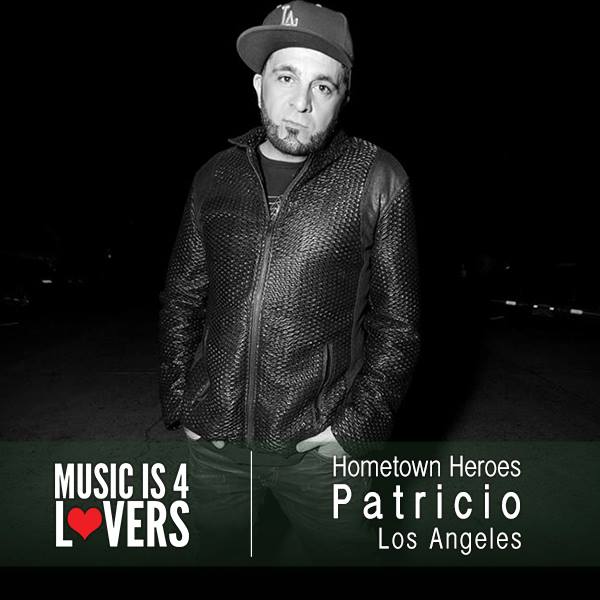 Patricio is one of Los Angeles’ real gems. If we had to define the Hometown Hero, we’d start by introducing you to this guy. A true hero is not just a great DJ or promoter. Talent alone does not define the hero. A true hero is someone that inspires others and uses his or her talents to give rise to the people and community around them. Patricio is as humble as they come, but his talents go beyond his skills as a DJ. He is an expert at making people feel good about themselves and he is always the first one to let you know how excited he is for you and how proud he is about the successes of his friends. Team player, community member, contributor, friend and lover are our favorite nouns for Patricio. His passion is apparent in his every move and he is a joy to listen to when he performs. We could seriously go on and on… but instead, here is the beautiful mix our friend has made for us, and an interview to give you a deeper glimpse into the world of Patricio.

Can you tell us how you got mixed up in this crazy world of electronic music?

Well, when I first moved to the U.S. I was a crazy kid all into punk rock, skate rock and a little metal. Believe it or not, I had long hair and hung out on the sunset strip for a while. I’m talking 1990. It was crazy back then. Going out to concerts and hanging out with all kinds of crazy cats. One night I got invited to this party, this “underground” party. I was curious to see what this “underground” was all about and let me tell you, once I got there, I never looked back.

In our experience, we’ve learned that nothing good comes easy. We know you to be involved with great promoters, festivals and events. Tell us a little about your journey as a DJ and how you’ve come to establish yourself amongst such a quality crowd.

In 1986 before I even knew this electronic world existed, I used to play music at the parties we did with my friends. I remember building my first mixer from scratch with my friend and we had no turntables either just 2 tape players. It was all cassette tape mixing! Yes… 80s tape mixing baby! Anyways, fast forward seven years; I became a crazy vinyl junky and once I got my hands on some 1200s I started to DJ in my bedroom – like everyone else. I was always checking out DJs and new music at parties all over LA . Once a week I had a mandatory tour through all the record stores where I proceeded to spend all my money. Back in those days your main means of promotion was putting out mixtapes. No Soundcloud in sight! I started playing at small local clubs, meeting new peeps and always trying to network. Along the way I met Pasquale Rotella, just another raver back then, now one of the most successful people in the electronic dance scene worldwide. We became friends and he invited me to come and play at this friday night after-hours he had. INSOMNIAC was a Friday night after-hours before it blew up to be the EDM giant that it is now. I think being a resident DJ at D.A.R.E. and INSOMNIAC, were the two gigs that help me the most. I also think that Burning Man helped me a lot as a DJ as well.

DJ Dan and RAW back in 1991/92 blew my mind. Their style and dexterity with vinyl had no match. They really inspired me to pursue DJing more passionately. One of my favorite DJ moments was at Burning Man; I was playing and DJ Dan came to talk to me after my set and told me he had loved my set. I felt the energy I felt when I first saw him. It came back full circle. It was definitely a good feeling. My style since then has shifted many times. I feel like a musical amoeba, I’m always morphing and evolving. I guess I have way too many musical influences to mention but I can definitely tell you I look up to some of my friends; Eduardo Castillo, not only musically but as a peer and as a mover; for creating and shaping something he believes in. I respect that and I am proud to be part of it here in LA. I look up to my friends and peeps because I see them work so hard. To me, these are the real heroes:  Dance Spirit, Jon Charnis, Sabo, Jonny Cruz and Silky, Low Tide, Blond:ish, Lee Burridge, and one my biggest sources of inspiration is Shawni, my beautiful wife.

Tell us more about the Do LaB. How long have you been involved with those guys? How is it being a part of such a creative and forward thinking production company?

I blame Burning Man for putting me on their path! After my first time on the playa in 2002, a group of us, lead by my friend Stefano, started doing parties in downtown at a place we called Space Island. It was one of the only true underground spots in LA around that time. At first it was mostly the Burning Man community but  soon we outgrew that scene. The Do Lab was part of that community and slowly became more of a family to me. They invited me to come play at Lightning in a Bottle when it was just a birthday celebration and then Coachella later on. I also had the chance to travel internationally with The Do Lab and see them grow into the amazing force they are now. It feels unreal to see the transformation they had and it makes me so proud to see all the positive things they do. Everything they do comes from an amazing place in their heart! Always trying to make a difference, listening and trying to make it better at the same time.

What is in store for the future? Are you making music? What are your aspirations as a DJ/producer?

Well July brings a trip to Europe to go scope the other side of the ocean. Maybe expand my DJing territory. My true passion always has been DJing, making people dance. I have been making music which I’m definitely diving deeper into it when I get back from my trip in August. Working on a project with a good friend of mine and excellent DJ/producer as well. My dream is also to be able to produce and DJ with my wife. We have DJed together a little, now onto producing… we will see soon…