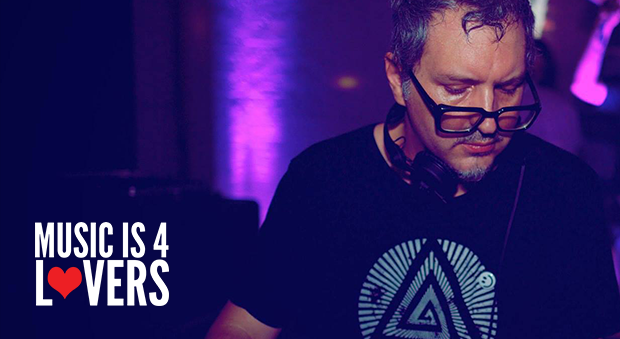 San Diego luminary — Mark E Quark — has been programming music as a DJ for nearly 30 years. His twisted taste in tunes can fuel any dance floor at any time… and for however long. He is the bona fide definition of a “DJ’s DJ.”

Mark delivers a unique element anytime his name reads on the bill — whether he’s the “headliner” or not; and his sets are always well thought out and brilliantly balanced. Never monotonous. That same sensible ambience also transfers over to SD’s grooviest dance party — MOONSHAKE — in which Mark is a founding member of alongside long time confidants Dazzla and Lee Reynolds.

As far as Hometown Heroes go in San Diego Mark E Quark is as good as it gets — Hall of Fame status. Read more about Mark’s story in his interview below and tune into the new mix he has decorated us with.

What does the ‘E’ stand for?

Give us a brief history of Mark Quark. When did you get into DJing and house music? Do you remember a specific moment of revelation?

This is a hard one to answer only because I’ve been at it since 1988. I guess I will try my best to be as brief as possible without boring people to tears with my entire life story. I began as a college radio dj at KSDT radio at UCSD. I received my first break as a club dj playing a weekly event at SOMA nightclub around the end of ‘89. Back in those days I was playing a mix of disco, acid house, belgian new beat, and the early house & rave tunes.

By ’92, the rave thing was in full swing and I was active in both throwing parties and djing extensively in southern California and then throughout the US by ‘93. The rest, as they say, is history.

An early musical turning point for me was going to my first Wicked party in San Francisco sometime in ‘91 and hearing Jeno, Garth, Markie Mark, and Thomas for the very first time. Hearing them was a complete game changer for me and that very experience would shift my approach to djing forever onward. You could even say that everytime I play, I try to recreate an experience as close I can to that very moment in time.

Tell us about your party Moonshake in San Diego. How did you link up with fellow Moonshakers Dazzla and Lee Reynolds?

Moonshake’s manifesto is really pretty simple: MOONSHAKE is an adventure into future disco, spacey house, and techy grooves. It began really as a place where Lee, Matt, and I could throw a party that we would actually want to go to.

I met Lee through a mutual friend sometime in the early 90’s and met Matt at a party I was involved in called Dos Tres. It was clear by him showing up to see guests such as Tim Sweeney, that he had excellent taste in music which would inevitably lead to us becoming brothers in rhythm.

Even though our styles are different Lee, Matt, & myself seem to compliment each other very well, which is what I think makes Moonshake so special. The diversity and enthusiasm of the crowd also makes the party quite exciting. It’s hard not to feed off that energy!

Currently I’m working with Hugh Herrera on getting a few of my edits/remixes released on wax which I hope will help pave the way for more production/remix work. By the year 2020, I will probably be finishing my 4th world dj tour in support of my newest album. 😉

This is a tough one but what was the best crowd/party you’ve ever played for?

Hmmm.. yeah, this is a hard one – there’s so many but I would say that my most memorable party I played would have to very first time Dan Ghenacia invited me to play at the Rex Club in Paris. Amazing space, vibes, crowd, the whole nine.

What is your go-to jam at the moment?

The Black Madonna “Stay” or Maurice Fulton’s mix of DJ Nori’s “Happy Sunday” both of which are on this mix. 🙂

Tell about your mix?

The mix is on the deeper and funkier side of the house spectrum but with a rugged underground after-hours party vibe threaded together with bassline heavy jams. There’s also a ‘love’ theme happening which I thought was appropriate given that this session was created exclusively for Music is 4 Lovers. I felt I really locked into the zone with this one and, even though it’s not technically my most perfect mix, I feel that it really captures me perfectly.

Irish whiskey on the rocks, particularly Red Breast or Jameson.