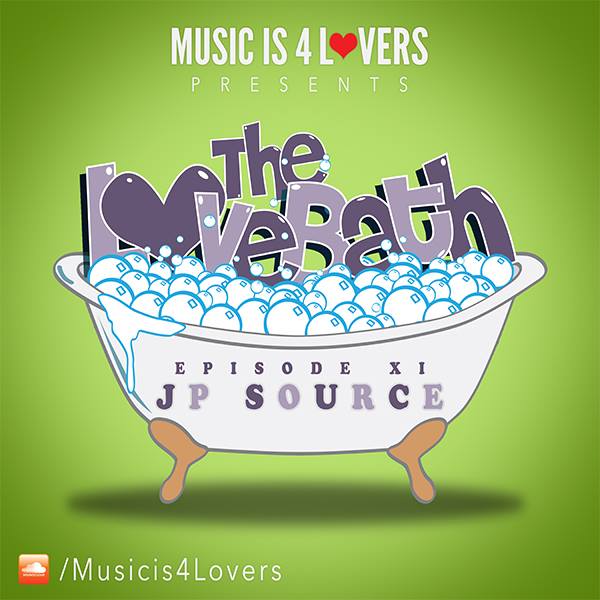 For the 11th chapter in our steamy LoveBath series we invited Lancashire native JP Source to share with us his own special blend of bubbles, bass and bath time melodies… as he puts it, music that is designed to make the sun shine in your heart regardless of how the actual weather is. JP has released his groovy nu funk cuts on labels like Bedmo Disco Records, Audio Parallax Records, Aural Graffiti Recordings and most recently on Hot Digits Music. For episode XI he has mixed a very special Bath for us,­ showing off his sleazy selection from Bobby Womack to EPMD to his own exclusive edits crafted just for this mix… we hope you’re ready to get wet.

** If you don’t see the SoundCloud player CLICK HERE.

Can you tell us a little about where you’re from and where you grew up?

I’m from Lancashire in the North of England. I was brought up by the seaside, mostly In Blackpool which is famous for a big tower, a great amusement park and heroin. It does have some great links to house music and soul though through Shaboom and The Mecca respectively. I spent a lot of time in Newcastle Upon Tyne, where I went to school. They have a great scene there and the city as a whole seems to really embrace the arts and nightlife.

When and why did you decide to move to the US?

I came over about 4 years ago to be with my girlfriend (who is from here) and we got married (so i thought I’d better stay).

What is the scene like in Louisville? Tell us about you Mile High Club parties at 8UP.

Its a very open city, theres a cheekiness to the place I love. I think its because most of the industry here revolves around vice, like gambling, tobacco and booze. People love to party here.

The Mile High Club takes place in this rooftop bar called 8UP. It’s pretty classy and chilled fun. I also co-host a night called Disco Downtown with my friend Aaron (Narwhal) Chadwell at this great space called Meta. Aaron and other local DJ’s, Alex Bell, Sam Sneed, Jason Shelton, Matt Anthony and DJ Persh were incredibly supportive and welcoming when I moved to town, they have become really good friends.

At what point did you get into soul and disco?

It’s been massively important to me for as long as I can remember. I suppose I got properly into soul and disco when I was going to some of the local ‘Northern Soul’ nights in my late teens. Also tracing back samples and influences on some of the people I loved like Cut Chemist, Le Knight Club and Lo Fidelity Allstars. The more I got into house the more I got into disco which makes sense.

Are you working on anything in the studio right now that you can share?

There’s plenty on the go right now, loads of edits impending and some original material that I’m just waiting to get the vocals recorded for.

With most covers and re-edits that there is a predominant vintage sound, do you use a lot of classic gear in the studio? If so what pieces do you use?

Ive got a few Korg pieces nothing that old though. I like to send most things I do through this lovely Yamaha receiver my father-in-law has trusted me with. It’s a beast the pre-amps are so nice in it.

Hobbies when you’re not making music?

Playing with my son Jack or cooking. Ive been getting more and more into video editing recently too, mostly for projections at parties.

What are a few tracks you’re playing out right now?

–
Pretty much anything by Ponchartrain too.

Favorite non-disco record(s) in your collection?

Tell us a little about your LoveBath mix…

I tried to go full on sleaze. It’s pretty much a ‘back to mine’ mix, but with romantic intentions. I made a couple of edits just for this mix. Thanks for asking me to do one, I had a lot of fun making it and i’m really honored to be amongst the others in the series.

Old Forester Signature with a couple of ice cubes.