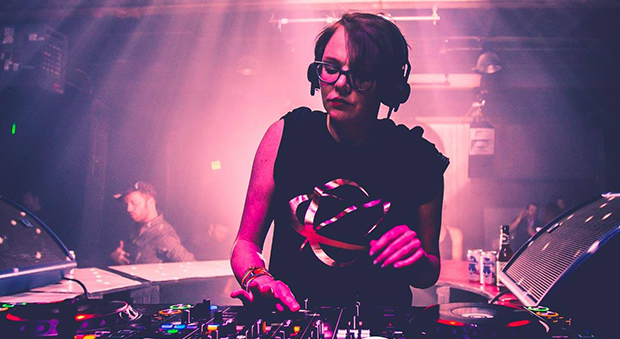 Beyond Mormon churches, high altitude, and snow-capped mountains, Salt Lake City’s electronic community is thriving. Artemis, who is one of the many talented people attributing to the scene. Her obsession, brings for a euro-inspired sound of textured hypnotic beats to the dance floor.

We are really excited to welcome her onto our Hometown Heroes Line-up. Enjoy her mix and interview below!

How did you get into dance music and DJing?
I went to London and Berlin several years ago and came back completely obsessed. Prior to that, I liked going out dancing with friends in college, but I was pretty unaware of electronic music “proper”. When I finished grad school I took a trip Europe and was traveling with a friend who worked for Mixmag at the time. We went to some of the best clubs in the world – Berghain/Panorama Bar, Watergate, Fabric, Paris Social Club. When I came home to the U.S. I started exploring genres and artists – I’d stay up all night for weeks, it was kind of ridiculous. This was in 2012, so the difference between dance music in the U.S. and what I had experienced in the European club scene at that time was massively different. I was really drawn to European producers and more refined, minimalist kinds of production. It didn’t take very long for me to buy some equipment and just dive in. Within a few weeks, I think.

Describe the scene in Utah? Any recommendation for events or clubs?
Watching the music scene in Salt Lake City evolve over the last five years or so has been fascinating. It has really shifted from a pretty typical over-ground scene with clubs and more mainstream styles of dance music playing on any given weekend to having a strong techno and tech house underground. Over and over I hear visiting DJs say they are totally blown away by the scene here, and it’s all because of the people. I understand why Salt Lake City might seem like surprising location for really rad warehouse parties, but in general I would say that Salt Lake City has a strong alternative culture in a lot of ways. I think that’s the case wherever there’s a massive mainstream culture, in our case the Mormon church. That kind of presence creates a cultural tension where a lot of interesting things can happen. Our LGBTQA community, for example, is very vibrant and active. They’ve been huge supporters of mine since the beginning. For someone visiting here, I’d tell them to watch for New World Presents, New City Movement, Quality Control, or Cland:estine events. New World throws the most AMAZING festival in the summer – Lunar Transit. I swear, my best sets happen at Lunar Transit because the people and the vibes are so incredible. The clubs here can be a bit unpredictable musically, but we do have great DJs roll through pretty consistently. You can also almost always hear great music from local DJs at the Red Door, a cozy and kind of intimate cocktail lounge, on Thursday and Friday nights.

What and who inspires you?
I really love texture – I look for tracks that give me cosmic chills and play those. I’m really inspired by artists who really understand the interplay of texture and narrative in a track or in a mix. Producers like DJ Tennis, Rrose, and Boris Brejcha are brilliant at this, but in very different ways. I get a lot of inspiration from my own experiences when I hear great DJs play. I like tapping into not just the music but also the vibe and energy of an event or music festival. I tend to seek out those kinds of experiences so I can lock into the feeling of being lost in a moment and channel it into my own music.  I’m also a ridiculous fan of Dixon. His shirts are really cool.

What cool things do you have planned for the rest of 2017 and beyond?
The biggest thing is venturing back to Europe this fall, and hopefully booking a few gigs while I’m there. My festival season has been pretty quiet this year, so I’m making up for that with trips to Denver and San Francisco for sure, and hopefully others. I’m working on a few promising projects that extend my reach outside of Utah a bit, which is exciting. There’s this hurdle, you know, where you have a lot of presence in your local scene and bridging beyond that is a challenge. Burning Man is definitely going back on the menu for 2018, since I’m taking a break this year.

Vinyl? Digital? Both?..
Digital. I am definitely part of the generation of DJs who were able to access DJing because of digital technology, however I love analog sound. I think there are strengths and advantages to both digital and vinyl. I have massive respect for vinyl DJs, for sure. We DJs tend to be really critical of each other over relatively arbitrary things, so I try to keep the perspective that everyone has their own style of playing. My setup is currently my Allen & Heath Xone:92 mixer, Pioneer CDJs, and a turntable connected to mess around with.

Top 5 Tracks in your playlist?
Oh boy, that’s really tough. These aren’t in a particular order (and by no means exhaustive):

Tell us about your mix…
The selection is mostly new choons in my library, with one or two added favorites. It’s a good snapshot of what I’m listening to and playing currently. I’d describe it as “Cosmic Tech” – labels are weird, you know? For me, the best stuff defies categorization. I think its forward leaning with a nice build, and brings it down at the end with one of my favorite tracks.

Drink of choice..
Wine – Usually Spanish reds or a dry pinot grigio. At first, people thought it was really weird that I had a wine glass in the DJ booth or on the dance floor, but I think its catching on!