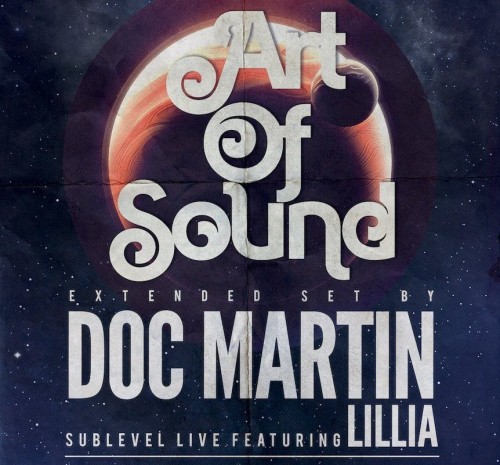 Doc Martin Speaks with Mi4L About His 4/20 Show in SD, Sublevel Records and Vocalist Lillia

Saturday, April 20th, one of San Diego’s long standing underground parties, “Art of Sound” (run by the Siesta Records crew) will hosting the legendary Doc Martin for a special extended set. The performance will also feature Lillia with live vocals and warm up sets by Siesta Records’ head-honchos, Bert “Paluka” and Cris Herrera. In anticipation of the inevitably unforgettable evening, we asked to have a few words with the king of Sublevel himself, Doc Martin. We’ve been seeing Doc come to San Diego for quite a while now and figured it was about time we found out a little more about his love affair with San Diego.

A – God where do I start. We just did our Sublevel party in Tokyo, which was a beautiful experience.

Studio has been on fire between re-mixes for

Q – We heard you’re coming to San Diego on 4/20 to play an extended set at a party called “Art of Sound”. Can you tell us a little bit about this party and your relationship with the Siesta Records guys who put it on?

A -We always like to support independent parties, who put the effort in to do something special for their own scene. I did my single record deal w/ the Siesta guys at a desert party gathering. The parties are always a good vibe with a really good crowd. If you’re looking for something a bit more on the vibe, this is the place for you.

Q – What makes San Diego special for you? We’ve seen your name billed many times at undergrounds here and the parties are always packed! Do you feel a special connection to the city or its people?

A -I love that San Diego has always had it’s own thing going on, since the first time I played here in the early 90’s. Things like Narnia, Playschool, Ole Madrid, The Guff, Events at the Sports Arena, Siesta fiesta’s, and tons more. We always get a good crowd from SD that come up to our parties in LA as well.

Q – Tell us about your vocalist Lillia. How long have you guys been working together? What can people expect from the live performance on 4/20?

A – Lillia is the unsung hero of the whole Sublevel thing from the parties, to the label, live shows, and bookings. We’ve been making music for almost 12 years. She brings a certain warm vibe to the shows that you won’t get anywhere else.

We have performed almost everywhere worldwide, and in the US. She is really driven by her love of the music!

Q – Can you tell us a little bit about your label Sublevel? Anything exciting to announce? Anything in the works?

A – So far this year we have released on our Sublevel UK label LADM-In-Excessive, Just as w/ a DJ Sneak RMX. We are also re-releasing Just US w/ some very good re-mixes. We have a bunch of singles lined up as well. We’ve licensed tracks so far this year to Loco Dice (Defected), and Apollonia for their Fabric CD.

We are going to keep putting music out that we believe in.

Q – Any track(s) special to you at the moment? Do you have something in your sets that has been particularly effective lately?

A – Wow! That’s a really unfair question. There are so many tracks that have elevated dancefloors old, and new. Check these for a start:

A -Diet RedBull, and Water

If you would like to attend this “Art of Sound” party, please email TheList@SiestaRecords.com or Guestlist@SoulonBeat.com
and CALL THE INFO LINE AFTER 7PM NIGHT OF: 619-955-1345