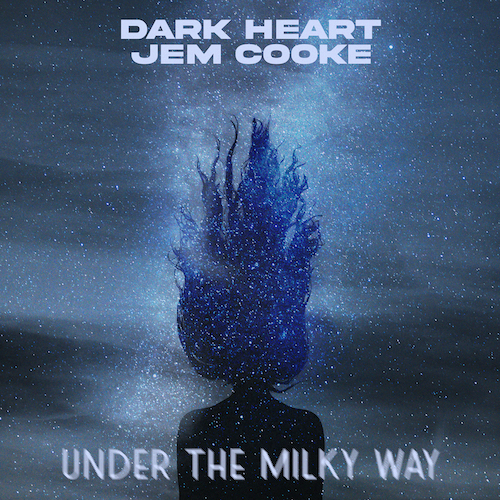 Dark Heart and Jem Cooke Go “Under The Milky Way”

Prolific producer Dark Heart has teamed up with esteemed vocalist Jem Cooke for a stunning reimagining of The Church’s 1988 hit “Under The Milky Way.” Transforming the new wave masterclass into a wholly modern club sound, Dark Heart lays down a propulsive house instrumental swirling with ethereal touches while Jem Cooke provides heavenly vocals that give the cover a celestial aura. It truly does the original justice and finds both artists at peak creativity.

Dark Heart explains, “I’ve always been a fan of the original by The Church, in fact I think every few years I get it stuck in my head. Some months ago I had an idea to do a more ethereal, melancholic production to capture the vibe of being “under the milky way” so I started it and tried several versions before finally finding something that captured the energy I wanted. To me, it’s reminiscent of being in a remote location and seeing the stars and milky way far clearer than you ever can in a big city. When I found out Jem was interested in working together on it I was over the moon (no pun intended). We worked together on this vision and she truly brought this record to a place I could only dream of when the initial idea came about. Jem is absolutely one of a kind, one of the greatest artists in the world and a truly wonderful person. I am so proud of this record and couldn’t be more excited to do it with her. ”

Jem Cooke adds, “I’ve always been a bit cautious about doing covers but when I was sent the original record I fell in love completely with the song. Then when I heard how Dark Heart wanted to reimagine it, I was in! The song itself is cosmic, random and beautiful and when I looked up why it was written I loved that the writer Steve Kilbey said it was about nothing in particular and that it was written by accident. I love those ones. The songs that drop out of the sky and can be whatever the listener needs it to be – almost like a meditative journey, looking up at the sky and letting something wash over you. Pure magic. This was a joy and an honour to sing, as was working with Dark Heart who is one of the loveliest people I’ve had the pleasure of working with ever. Am beyond excited to get this one out.”

Dark Heart is a dynamic talent who’s lived multiple lives in the entertainment industry. Starting out as a concert booker in college where he secured performances from the likes of Wiz Khalifa, he subsequently felt a calling as a talent agent for the big screen and made the jump from Indiana to LA. He rose up the ranks of the industry’s premier talent agency in WME and worked with a range of quintessential actors and directors, but he eventually felt another calling: music. Leaving the comfort of his heavy-hitting job behind, he took a fearless risk to follow his passion for production and navigated life as a newcomer in a wholly new industry.

At moments he thought he made the wrong decision, but in recent years, it’s crystal clear that his risk has paid off. Dark Heart’s impressive catalog (including official remixes for Bazzi, Seeb, GASHI & DJ Snake alongside collaborations with Jonas Blue) has amassed over 100 million streams to date with original releases through Spinnin’ Records, Solotoko, Tomorrowland Music, Selected., Musical Freedom, Thrive, Electronic Nature, Smash The House, Dharma, NCS, Circus Records, and Proximity. He’s been supported in live sets and radio shows all over the world by Tiësto, The Chainsmokers, Marshmello, SIDEPIECE, Sonny Fodera, and Joel Corry, rapidly evolving into a household name in dance music and beyond.

Jem Cooke is a London-born singer-songwriter likely best known for her contributions to Camelphat and Cristoph’s “Breathe” with over 88 million Spotify streams. Having spent a stint of time in the UK’s celebrated House Gospel Choir and with a musical family upbringing, dance became Jem’s home. Her blend of inspirational vocals and huge range have led to a prolific release schedule across house, deep house, techno, chill, underground and pop/dance, with recent cuts alongside Dirty South, Cedric Gervias, Ferrick Dawn, 220 KID, Phantoms, Gorgon City, and Jax Jones.