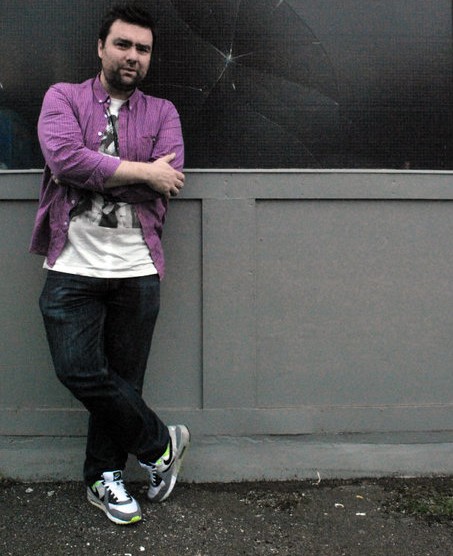 [Artist Profile] For our first artist profile, we have chosen to interview Bubba, aka Jonny Smyth of Belfast, Northern Ireland. With recent releases on Universal Ear & Alive Recordings, we haven’t been able to take our ears off of his music this Summer. Here is some insight into the artist and a special first episode for our Lovecast series with Bubba.

Let’s start with the name Bubba. Where does it come from and how did you get it? Have you always gone by Bubba as your production moniker?

A group of mates and me were watching Police Academy at a party and everyone started calling me Bubba after the actor Bubba Smith (who sadly died this year) who plays the character Hightower, my names Jonny Smyth and it sort of stuck and when I was looking for a production alias trying to come up with cool sounding names such as TechnoHed/DiscoMash etc my mate Timmy said just use that. I think it sounds a bit silly sometimes but it’s gained it’s own identity now. I have done a few other collaborative tracks under different monikers as International Swingers, MST (Mystery Science Theatre) and had a short-lived electro/Italo project as LOVERZ.

I was always messing about with friend’s decks and records; they were always hitting the record stores and buying the latest imports. I thought I just don’t want to play this music but make it I saved up a bit of money and bought a drum machine and keyboard starting putting together ruff tracks. Then my friend Mark ‘Scoper’ Bell suggested we get a studio together got an Atari/Mixing Desk/Sampler and we were off. We were hitting record fairs and hooking up with people selling their record collections getting samples and ideas, we put together a track called ‘I’m Satisfied’ and sent it off on tape (remember them!)to some labels Derrick Carter’s label Classic got back to us and signed it. It was like wow to guys from Belfast on this cool label! We had a few more releases and Mark even set up his own label, but I guess he got fed up with the scene and I think even my mojo ran out! I was still tinkering about with music in my own studio and about 2 years ago a mate hooked me up with some new music from the likes of the Revenge and OOFT! I was like ‘Mmmm.. This is fresh’ Got  me inspired and started producing some new material which got signed to my mates the Jet Project and Chris Duckenfields label and off I went again!

Where are you from?

At the moment I’m based in Belfast Northern Ireland.

How was the music scene growing up?

When we where teenagers me and and my buddies where always hitting this club in Belfast in the 90’s called SugarSweet ran by Techno/soundtrack legend David ‘Oceans 11’ Holmes. It was basically the only club in town, held about 500 people and you had to get to it through these bombed out, riot strewn, security tight streets. In there it was an education in the best house and techno from Chicago/Detroit/Germany/UK with guests who were not put off by the troubles such as Andy Weatherall/Xpress2/Dave Clarke who could’nt believe the atmosphere and energy in this place which was amazing.

Did this play a factor in your development as an artist and music producer?

I am really influenced by the audio/visual experience of that club the sound system was incredible which made this futuristic music mindblowing! You would walk in and think what the hell is that track playing! That’s the benchmark reaction I want from my music.

Growing up was always absorbing music a lot of soundtrack stuff by John Carpenter Sci-Fi movies Italo disco early electro…the period 79 to 84 I find fascinating in music and movies it seemed to be the big explosion in synth groups Human League, Gary Numan, Giorgio Moroder and New Order … movies like Blade Runner Star Wars, Escape from New York.. at the time it all seemed so futuristic even when you see the clip of bands on Top of the Pops it has this retro futuristic thing going on.

Are you content with your location or could you see yourself moving somewhere new?

In the 90’s and early 00’s before Facebook my primary source of info was through magazines such as The Face (defunct London fashion/music bible) Mixmag, Jockey Slut, you were reading about these amazing clubs/records/artists.

The scene in Belfast is about to go off I’m hoping after London/Leeds/Manchester it’s our turn! The MTV music awards are being broadcast from here in October … there is a positive exciting atmosphere in the city, even with the oppressive club/bar licensing laws. There are artists like Psychotron smashing it on Planet E, Jet Project who are about to go off on Riva Starr’s Snatch label, Space Dimension Controller on R&S Phil Kieran on Cocoon, The Japanese Popstars (who are from up the road in Derry (but play lots of gigs in the city!). There is a healthy crew of young up and coming Turks producing music and running nights. The big clubs like Yello, Stiff Kitten and Thompson Garage are having big night’s and cool guests. People are definitely wanting to party and have fun … we are putting on Extended Play label nights with fellow promoters on Boats, in restaurants.. I even went to a party last month in a Kebab shop!

I think things are kicking off in London.. there seems to be a real renaissance in the whole club and music scene there. I’m getting more and more gigs there so it might be an opportunity to go over and set up base there, plus you are out and about catching up with people and you never know who you bump into!

Tell us about working with your production partner T-Bone. We see your names paired on many releases, how did this relationship come about?

T-Bone is my buddy Timmy Stewart one half of the Jet Project we just decided to do a studio session one day together focusing on a more Chicago 80’s 90’s sound, and it started there. Then the opportunity came up to reedit a TRAX track we selected one of our fav’s  Frankie Knuckles & Jamie Principle’s classic Baby wants to Ride and give it respectful reedit and tweak and it got put out on the 25 year TRAX Anniversary compilation..so we were really buzzing to be attached to this legendary label that we used buy on those dodgy repressed vinyl!

Are you more inclined to work on collaborations with other artists or solo?

I started out collaborating with my mate Mark ‘Scoper’ Bell so I’ve always worked with people on various projects. Then, I started my own solo project… it took me about 6 months to develop my own sound.. It’s a good creative process bouncing ideas of each other!

Have you done much touring? If so, can you tell us about one of your best/favorite moments and one of the worst?

I have been playing round Ireland Scotland and London for the last few years everyone has bum gigs when no one turns up. I’ve had a few were you just get your taxi home..one interesting  gig was an after party with Andrew Weatherall and David Homes many years ago.. I was doing a live pa but had everything cranked up full tilt as soon as I touched a key the system blew up…everyone thought is was the grand finally!

Myself and T-Bone were playing a gig in London in July, we walked into 700 people going off at 6pm and by the time we came on at  9 the place was jammed and we jacked it out …a great atmosphere!

Can you tell us about the video you have provided us? How does it feel having your music supported by other artists like Jamie Jones?

A friend emailed me the video.. and I was wow Space Ibiza my favorite club and here’s Jamie Jones smashing it with my track Dance with Me..as I said I’m putting this stuff together in my studio in my spare bedroom in Belfast and you see clips of Richie Hawtin, Jamie Jones playing your stuff to a room of 1000 people, it’s a great buzz!

I am a bit obsessed with Blue Monday by New Order not only the track which has one of the best basslines ever but the whole story behind the track about the band and the Manchester scene.

What’s next for Bubba? Releases, tour dates, anything special coming in the near future?

Yes getting really busy release’s  and remixes coming out for Catz N Dogz label Pets Recordings, Extended Play, Alive, Act Natural..a new track Drop the Bass is coming out the end of this month on Hannah Holland’s label Batty Bass…gigs in London, I have a new night called Nightlife in Belfast and playing a big festival down in Dublin alongside Dubfire, Seth Troxler and the Jet Project

Internationally looking at trip’s to Canada, New York and the West Coast…working towards gigs next year for Ibiza and Sonar in Barcelona!

Tell us about the mix you have made for Music is 4 Lovers.

It covers some of my fav tracks at the minute from disco edits deep house and a couple of new tracks from me and Coat of Arms..I hope you enjoy!