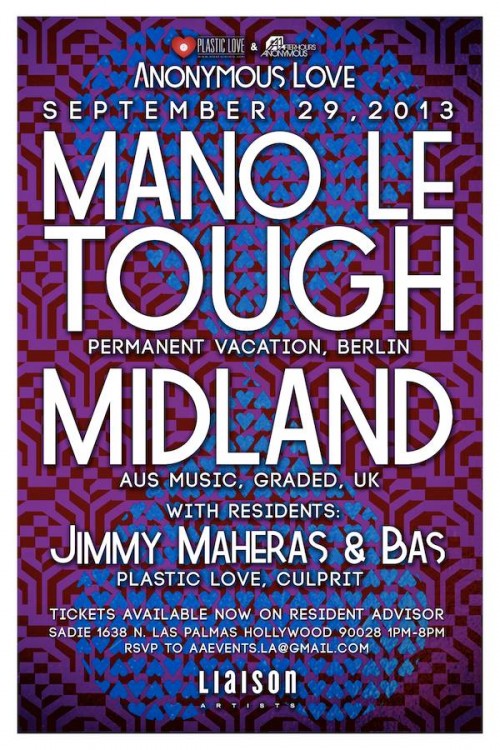 This new brand is bringing fresh options to the Los Angeles tradition of ending the weekend on a high as it brings in huge international guest DJs and producers from the worlds of house, disco & techno. Seasoned UK promoter Paul Cunningham joins LA veterans Bas Elgharib and Jimmy Maheras (Plastic Love/Culprit) and Denver-based AFTERHOURS ANONYMOUS to bring in a raft of established and innovative acts to further enhance the thriving LA electronic scene, while also promoting the huge amount of local talent this beautiful city has to offer.

Today PLASTIC LOVE & AFTERHOURS ANONYMOUS (ANONYMOUS LOVE) announced the next installment of their Sunday afternoon house affair, to be held Sunday September 29that the re-opened outdoor venue SADIE (formerly Les Deux) in the beating heart of Hollywood.  Doors open at 1 pm. Limited presales are $15 with remaining advance tickets at $20, available now on www.residentadvisor.net.

Special guests MANO LE TOUGH (Permanent Vacation/Buzzin’ Fly) and MIDLAND (Aus Music/Graded)will be making their LA debut courtesy of ANONYMOUS LOVE to keep you dancing all afternoon and into the evening with a perfect blend of anything from Deep House to Techno. Sounds from LA’s own PLASTIC LOVE (Jimmy Maheras and Bas Elgharib) will round out the event.

2013 has been a huge year for MANO LE TOUGH as he made his first appearance on Resident Advisor’s Top 100 DJ list, vaulting all the way up to #53. With releases on Internasjonal, Buzzin’ Fly, Mirau and Dirt Crew, MANO LE TOUGH released his debut album on Permanent Vacation in early 2013.  His track “Primitive People” has become one of the biggest of the year thanks to support/remix work by Tale of Us. MANO LE TOUGH has played DC-10 and Space in Ibiza, Warung in Brazil and Panorama Bar in Berlin just in the past couple months.

MIDLAND made his 2010 debut alongside longtime friend Pearson Sound with their anthemic track “Your words matter,” a track that would go on to be placed in DJ Mag’s “100 Most Important House Records” feature. Since then, subsequent releases with Phonica, More Music and Aus, and remixes for Turbo, Werk as well as artists like the 2 Bears and Julio Bashmore have cemented his reputation as a producer whose tastes reach beyond the dance floor. MIDLAND has performed at clubs from Fabric to Plastic People to Space in Ibiza, Horst in Berlin and Chinese Laundry in Sydney

ANONYMOUS LOVE will continue the party in the coming weeks with some of house music’s finest talents confirmed including Heidi (BBC Radio 1). The initial ANONYMOUS LOVE parties will be taking place on Sundays, but there are plans afoot and dates in the diary at various venues across the city.  It may begin to get darker earlier over the next few months but there is definitely plenty of light being created by the ANONYMOUS LOVE that’s in the air.